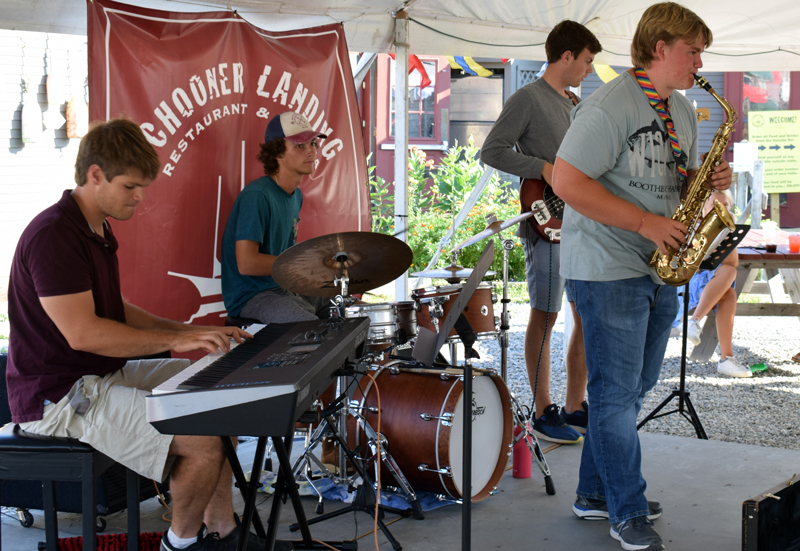 A group of high school and college students who spend summers in Pemaquid Beach jammed their way around Lincoln County this summer as the jazz and funk band Wharf Cats — formed to honor the late local jazz musician Pete Collins.

The young men summer with their families on Beach Loop Road, where Collins and his band had performed at a neighborhood pig roast after Olde Bristol Days since 2009.

After Collins died last summer, the students decided to start practicing together in order to honor him by playing the backyard celebration in his place. Collins had summered in the Pemaquid area before eventually settling there year-round.

Although the four band members have different backgrounds in music, they all said Collins and the Dixieland jazz he played inspired them. 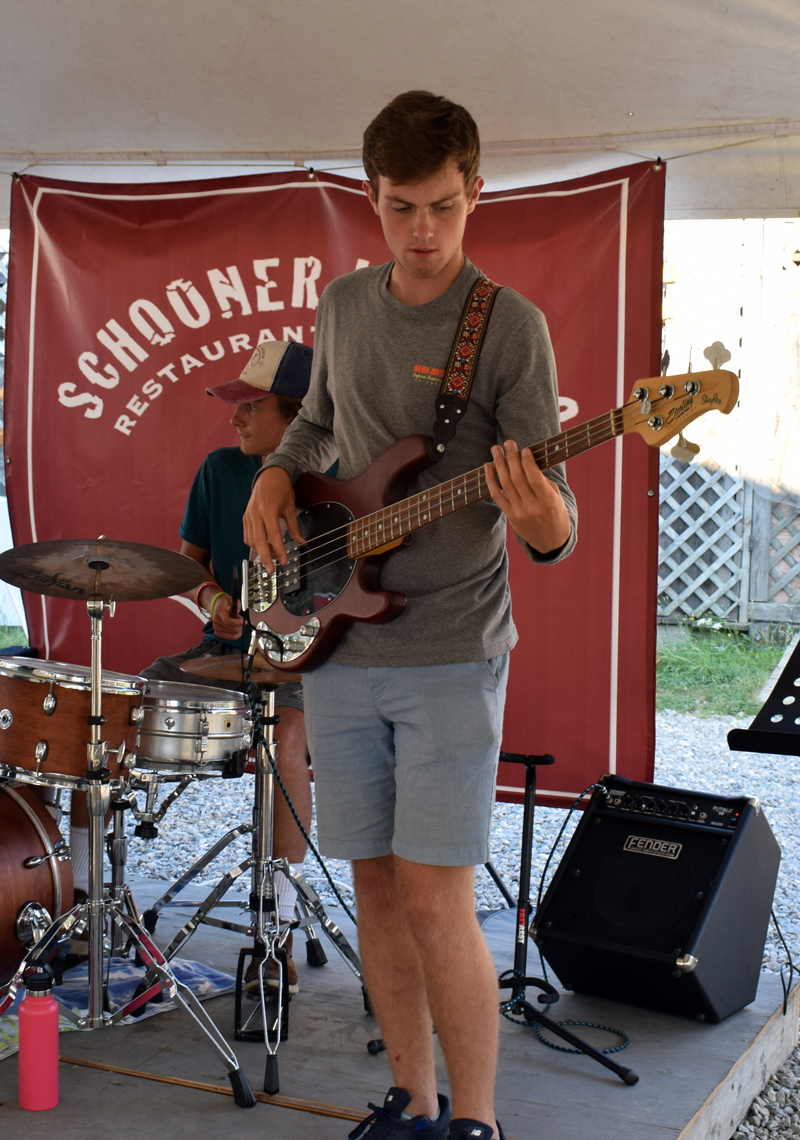 Ben Clifford plays the bass while his cousin, Nick Clifford, plays drums with the band Wharf Cats at Schooner Landing in Damariscotta on Aug. 8. The band formed in the summer of 2019 to honor the late jazz clarinetist Pete Collins. (Evan Houk photo)

Tom Linkas, the 20-year-old keyboard player for the group, said in an interview after an August show at Schooner Landing that Collins was a “stalwart legend of the jazz clarinet.”

Linkas remembers growing up and seeing Collins and his band at Coveside Restaurant and Marina, in South Bristol, with the Clifford family. Nick Clifford, 17, plays drums in the band, while Ben Clifford, 18, plays bass guitar.

“I still think about his concerts. Those guys were seriously good,” Linkas said.

Nick Clifford said Collins inspired him to switch from violin to clarinet in his high school band. He switched to drums in 2017.

The Wharf Cats said their first five-song gig, at the 2019 pig roast, was a little shaky, but after a lot of practice and some help from another summer resident, Marco Kelly, they started playing paid gigs this past summer, amid the COVID-19 pandemic.

Kelly went back to his home in Miami at the end of July, but the Wharf Cats continued to play outdoor venues until the end of August, when they left the area to return to school.

“By the time (Kelly) left, we were ready as a four to keep going,” Linkas said.

For a short time after that, Josh Garner filled in on guitar before leaving the area.

Sam Hall, 16, rounds out the group on saxophone, often playing the vocal parts of songs during the band’s instrumental sets.

“We didn’t have a singer,” Hall said with a laugh of why he started playing the vocal parts.

Throughout the summer, the band played about 18 shows at places like Fisherman’s Wharf and Pier One Pizza in Boothbay Harbor, The Harbor Room in New Harbor, and Schooner Landing in Damariscotta.

The band members said crowds were receptive and enjoyed their music. 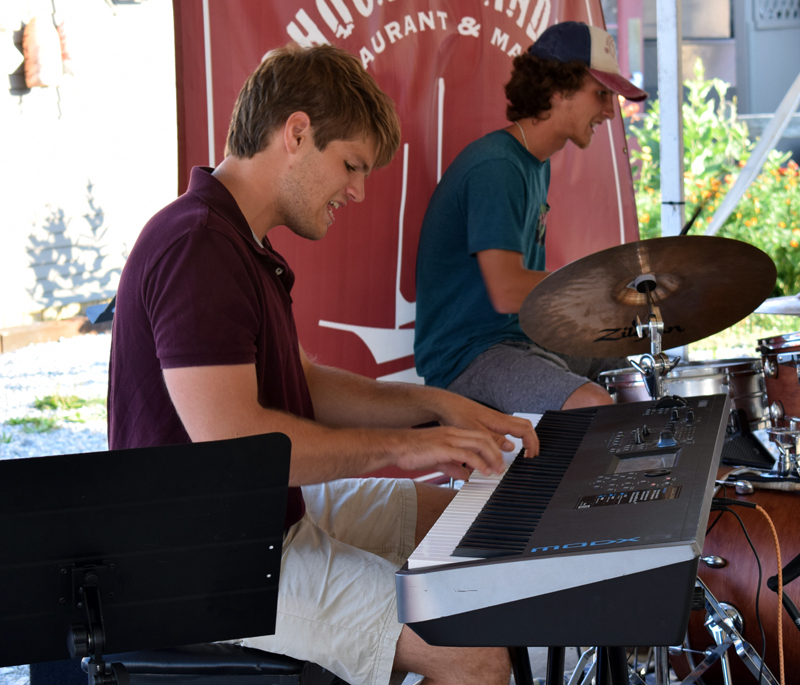 Tom Linkas jams out on the keyboard as Nick Clifford plays drums for the Wharf Cats at Schooner Landing in Damariscotta on Aug. 8. (Evan Houk photo)

The Wharf Cats’ set starts out with jazz standards and some soul classics, like Stevie Wonder’s “Isn’t She Lovely”—perfect dinner music. 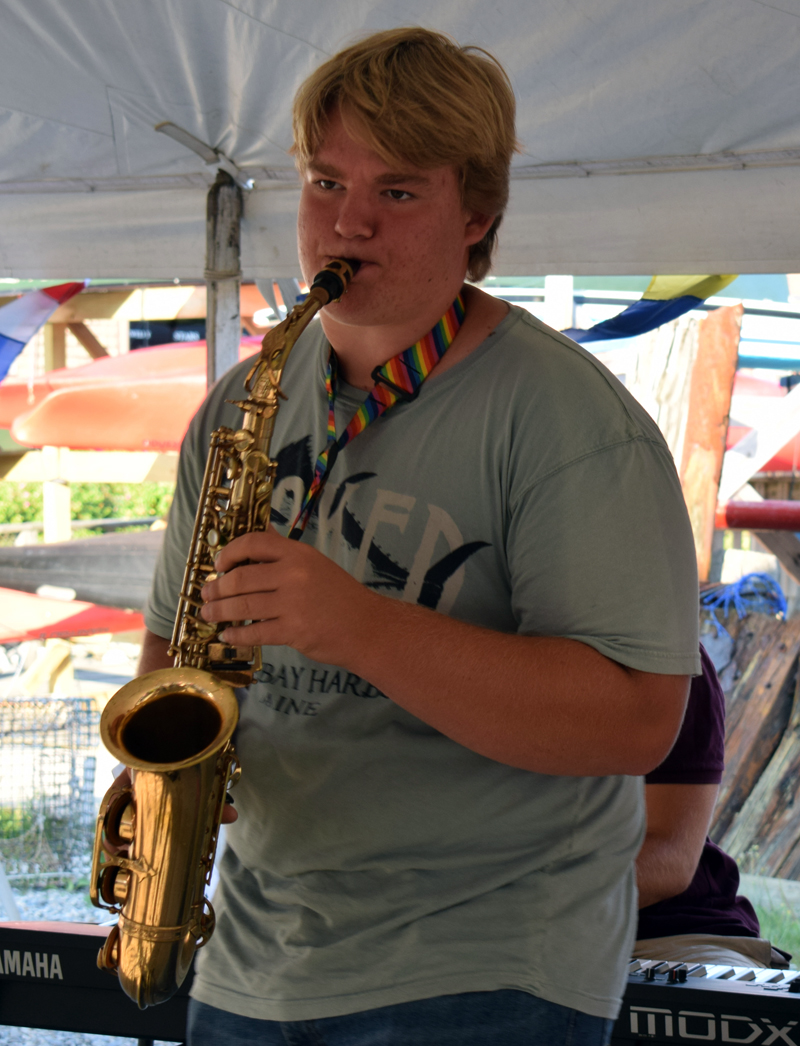 Sam Hall plays the saxophone as a member of the Wharf Cats at Schooner Landing in Damariscotta on Aug. 8. (Evan Houk photo)

After a break and after dinner, the band starts to kick out some rock ’n’ roll tunes, like Jimi Hendrix’s “Little Wing” or a classic cut from Creedence Clearwater Revival, the 1960s swamp rock quartet.

“Right now, our main thing is trying to keep the crowds that we play for happy, trying to make the vibe right, make things sound good, keep people where they’re at,” Linkas said.

The Wharf Cats played about 30 covers at Schooner Landing on Aug. 8. Members said they are working on original material as well.

According to a blurb in the Aug. 2, 2007 edition of The Lincoln County News, Collins spent the majority of his summers in the Pemaquid area and became one of the most sought-after jazz musicians in Maine and Massachusetts.

An article in the May 14, 1998 edition of the LCN states that Collins founded his band, the Jazz Band Ball, and appeared at clubs like Ryan’s and Eddie Condon’s in New York and The Famous Door in New Orleans. He played with Max Kaminsky, Red Allen, Jimmy Rushing, and Jimmy McPartland during his time as a jazz clarinetist.

Other items in the LCN archives indicate that Collins and his Jazz Band Ball headlined many benefit concerts for first responders and the Bristol Fire Department. They also played at the Damariscotta Oyster Festival through the years.

The Wharf Cats said Collins would also play at Coveside in South Bristol, Lobsterman’s Wharf in East Boothbay, and nearly every event around Pemaquid, like Olde Bristol Days.

The Wharf Cats plan to tour Lincoln County when members return next summer.

“We had so much fun this year, how could we not?” Linkas said.