Event co-founders Cindy Cheney and Caryn Frosio agreed that the turnout, of both people in the water and the 50 people on the beach, was the best in the dip’s history. The temperature hovered around 35 degrees.

Contributing to the record turnout were members of the Lincoln County Football high school team. Almost half the team turned out to participate in the dip, according to head coach Ryan Coffin.

“The community as a whole does a lot for us as far as funding, and we’re just trying to give back and support local programs,” Coffin said. “I would love to continue to do it and get more traditions involved. If the communities work together, then we can keep our football team strong.”

Bristol Fire and Rescue volunteers were present to assist if necessary. 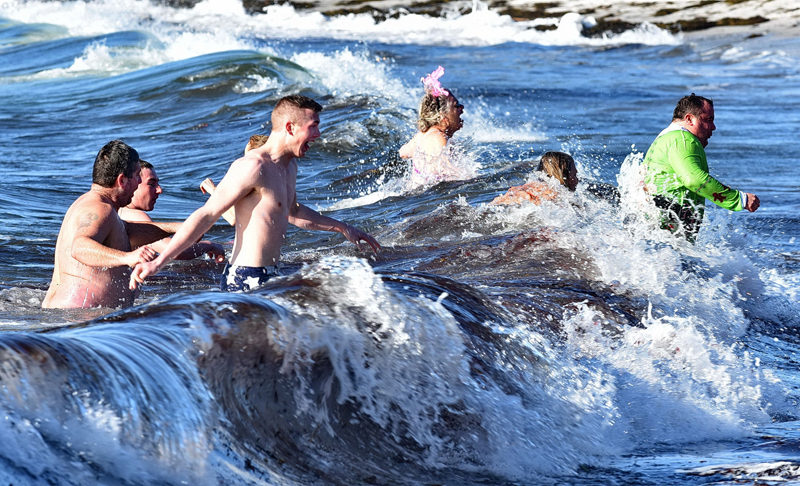 A wave overtakes some of the participants in the Pemaquid Polar Bear Dip. (Photo courtesy Sherrie Tucker/sherrietucker.com)

The event raises money for the Lincoln County Animal Shelter in Edgecomb. In addition to leashes, blankets, and dog food, this year’s event brought in more than $1,300 in donations. Frosio said more donations are expected to come in over the next few days.

After the total donation amount has been tallied, Round Pond developer and restaurateur Xavier Cervera will match the funds raised, Frosio said.