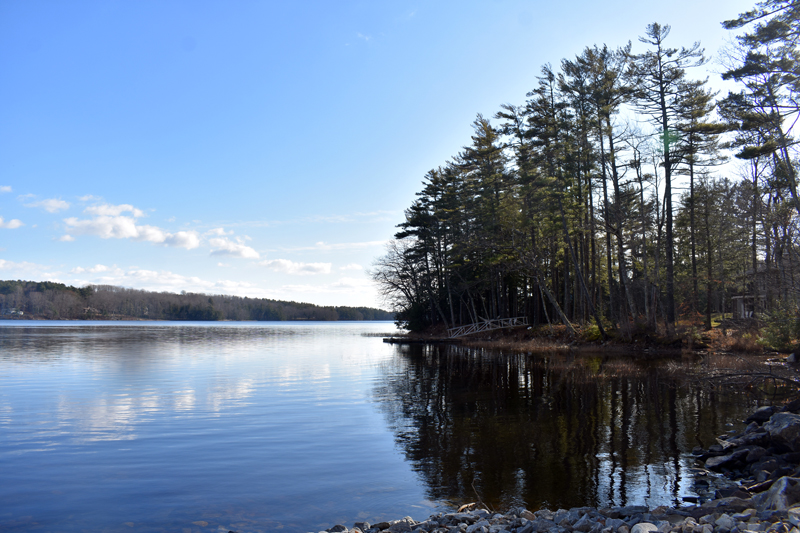 A view from the Pemaquid Pond landing in Nobleboro. (Alexander Violo photo)

Construction at the Pemaquid Pond boat launch, off Route 1 in Nobleboro, was completed Friday, Nov. 22 and the launch reopened the next day.

The closure of the facility was originally scheduled for Sept. 30 to Oct. 25, according to a public notice of the work.

Nobleboro Selectman Richard Powell confirmed the launch had reopened. “If they want to go down and get their boats out before the ice sets in, the landing is open to remove any boats left in there,” Powell said.

Powell was pleased with the work at the facility, which reconfigured the site to better accommodate boaters, kayakers, and swimmers.

“I think it came out pretty nice,” he said. The contractor rebuilt the old launch and added a smaller ramp about 50 feet north where people can launch canoes and kayaks, swim, and fish.

In the past, there had been issues with everyone using the same launch area. The new configuration should allow everyone to enjoy the landing, according to Powell.

Powell said the reconstruction work also makes the site more accessible, conforming to the standards of the Americans with Disabilities Act.

A portion of the facility’s parking area was paved as well.

Powell attributed project delays to a combination of rainy weather in November and a grade issue involving handicapped accessibility.

“They had a small issue getting the correct grade for the ADA access. It involved a little more work and they had to bring an engineer back in,” Powell said.

Powell said new floats and signage will be added next year. “New floats will be put in during the spring and more signage about milfoil and other things will be put up,” he said.

Powell said the completion of the project marks the end of a couple years of work, after residents brought the landing’s needs to the town’s attention.

“It was two years in the making. A resident called us, I called the state, and we got on the list. Luckily a couple towns ahead of us waffled a bit and we got bumped up a year and it was all done without cost to the town,” Powell said.

Nobleboro owns the property, while the Maine Department of Inland Fisheries and Wildlife, which oversaw the work, owns an easement on the property and the landing itself.

The state awarded the job to Bedard Excavation, of South Paris. The cost of the project was $140,000, with $117,500 going to the contractor and the remaining $22,500 to cover engineering work and the cost of the new floats, according to Nobleboro Town Clerk Susan Pinnetti-Isabel.

The property came to the town through the generosity of Roland and Barbara Bragg, according to Powell. He said the boat landing was put in due to the foresight of Bob Spear, of Nobleboro, who got the process started about 25 years ago when he was a state representative.