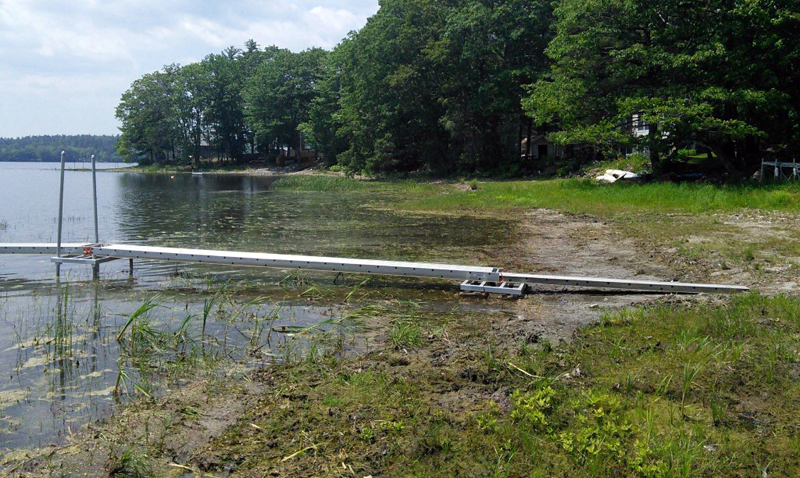 Three hundred and fifty Jefferson and Whitefield residents have signed a petition urging the Maine Department of Environmental Protection to take enforcement action against the owner of the Clary Lake Dam. The petition was turned into the DEP office in Augusta on Monday, Aug. 21, said George Fergusson, secretary of the Clary Lake Association.

It has been more than 3 1/2 years since the DEP issued a water-level order directing the now-defunct Pleasant Pond Mill LLC and its sole member, Paul Kelley, to fix the deteriorating Clary Lake Dam, which it owns.

It has been almost two years since the DEP issued a notice of violation to Kelley, Pleasant Pond Mill LLC, downstream property owner AquaFortis Associates LLC, and AquaFortis’ sole member, Richard Smith, for noncompliance with the water-level order.

“We are now in the sixth season during which the lake’s water quality and the health of the ecosystem continue to decline,” the petition states. “We, our neighbors, and the citizens of Maine are unable to fully use and enjoy Clary’s natural resources, the state boat launch, or benefit from water for fire protection purposes.”

Since the Clary Lake Dam was breached during Hurricane Irene in 2011, the water level has steadily declined. The roughly 670-acre lake had shrunk to about 400 acres by 2015, when the DEP issued a notice of violation.

The water-level order has languished in Lincoln County Superior Court since it was issued in January 2014, with Kelley, Smith, and their respective companies seeking to overturn it on appeal.

The appeal is one of several complicated legal entanglements of Pleasant Pond Mill LLC. Kelley and his company are also named in a lawsuit filed by Clary Lake property owners Cheryl Ayer and Robert Rubin, who are seeking damages for the impact of the dewatering of Clary Lake on their property.

Pleasant Pond Mill LLC has also sought to dissolve, filed for bankruptcy, and attempted to transfer ownership of the dam through various means since the establishment of the water-level order.

“Enough is enough!” the petition states. “We call on (DEP Commissioner Paul Mercer), as the state of Maine’s senior executive in this matter, to immediately direct the Office of the Attorney General to initiate the enforcement actions prescribed by statute in order to force the dam owner to immediately comply with the specifications of the department order under penalty of fine and/or DEP intervention.”

The petition was sparked by Jefferson property owner Kelsie French’s complaint to the Clary Lake Association, an organization of Clary Lake property owners, about the condition of her shorefront, Fergusson said. “It was awful,” he said. Weeds have overtaken what used to be water on her property.

The Clary Lake Association met to discuss possible courses of action to prompt the DEP to enforce its notice of violation, Fergusson said. While the appeal of the water-level order is still pending, there has been no stay on the notice of violation, which levies a fine of $100-$10,000 per day until the violations are remedied, he said.

Initially, the association discussed organizing pickets at the State House or at the Clary Lake Dam, but opted to circulate a petition as the best course of action, Fergusson said. “They have options. There are things they can do,” he said. Nearly every business surrounding Clary Lake helped circulate the petition, which was signed by almost every property owner on the lake, Fergusson said.

The DEP does have the authority to enter onto the dam property and “carry out the terms of the order,” according to Maine law. “They could repair the dam if they wanted to,” Fergusson said. “They could close the gate” of the dam, which is currently open, he said.

The notice of violation that was issued in September 2015 is still in effect, while litigation surrounding the original water-level order is ongoing, DEP spokesman David Madore said. The petition is under review, he said.