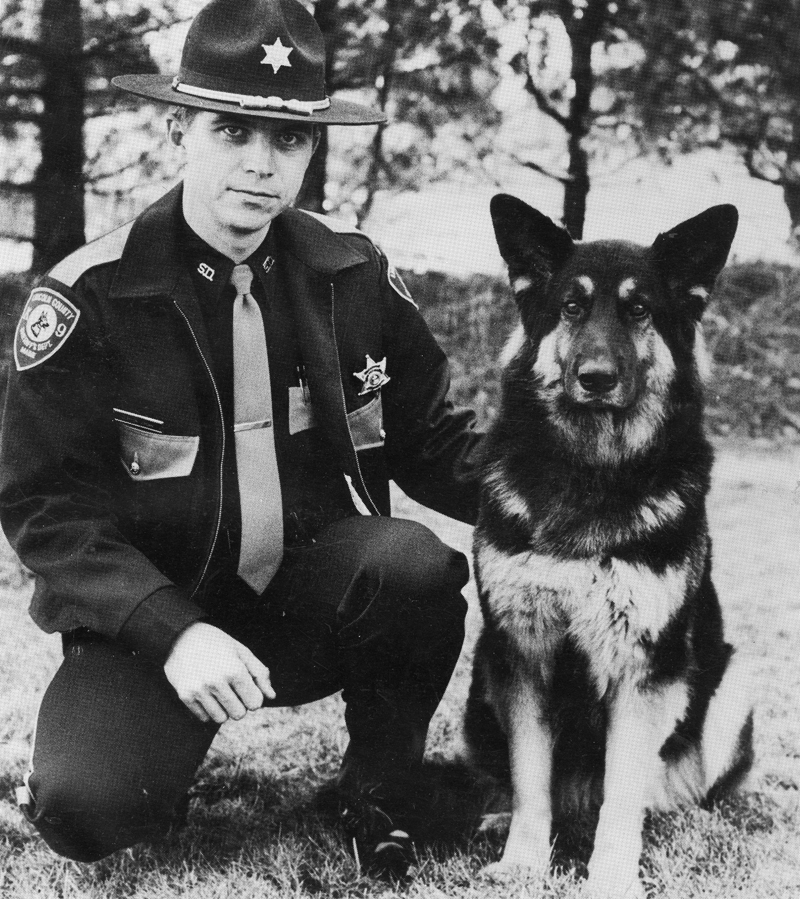 Lincoln County’s 2016 Deputy Sheriff of the Year is a 20-plus-year veteran of the agency whose career in Maine law enforcement dates to the early 1970s and who was once half of the top K-9 team on the East Coast.

Deputy Clayton Jordan first worked for the Lincoln County Sheriff’s Office from the mid-1980s until 2002, starting as a patrol deputy and working his way up to sergeant and lieutenant. He returned in 2012 to work court security. At 63, he is the agency’s oldest full-time deputy.

Jordan is originally from South Gardiner. He graduated from Gardiner High School in 1972 and started his career in law enforcement the next year, working weekends as a guard at the Kennebec County Jail. Jordan’s father was the county sheriff at the time, and he was attracted to the excitement of police work.

In 1986, Jordan became the county’s first deputy to work with a full-time police dog: a German Shepherd named Heidi. Jordan bought Heidi himself and paid for her training.

Their first track was in Wiscasset. One evening, Jordan received a call about a missing girl, about 4 years old. She had been playing on a swing set in the family’s yard when her parents looked out the window and she was gone.

Heidi twice tracked the girl from the swing set to the front door of the home, where she would sit and await further instruction. The girl’s father insisted they had already searched the home and grew angry, saying the dog didn’t know what she was doing.

Jordan convinced the father to let Heidi search the house. Heidi went to the top of the stairs and into the girl’s bedroom. “There the little girl was,” Jordan said – under the bed.

“That was a lesson to me that you have to believe your dog just like believing a compass,” Jordan said.

There were harrowing calls too. Back in the mid-’80s, there was only one deputy on patrol for the whole county after 2 a.m., and there were no portable radios in those days. Once a deputy was out of his vehicle, he was on his own.

It was around this time one morning when Jordan responded to a report that a stolen car had been found crashed by the S Road in South Bristol.

Jordan and Heidi found the car and Heidi tracked all the way from the S Road to the top of the hill before The Gut, where she went into a driveway and sat down. It was around 3 a.m., and Jordan heard a car start at the bottom of the hill.

As the car came up over the hill, Jordan jumped in front of it. Fortunately for him, the car stalled. The driver had stolen the second car from the driveway where Heidi sat down, and Jordan and Heidi apprehended the thief. 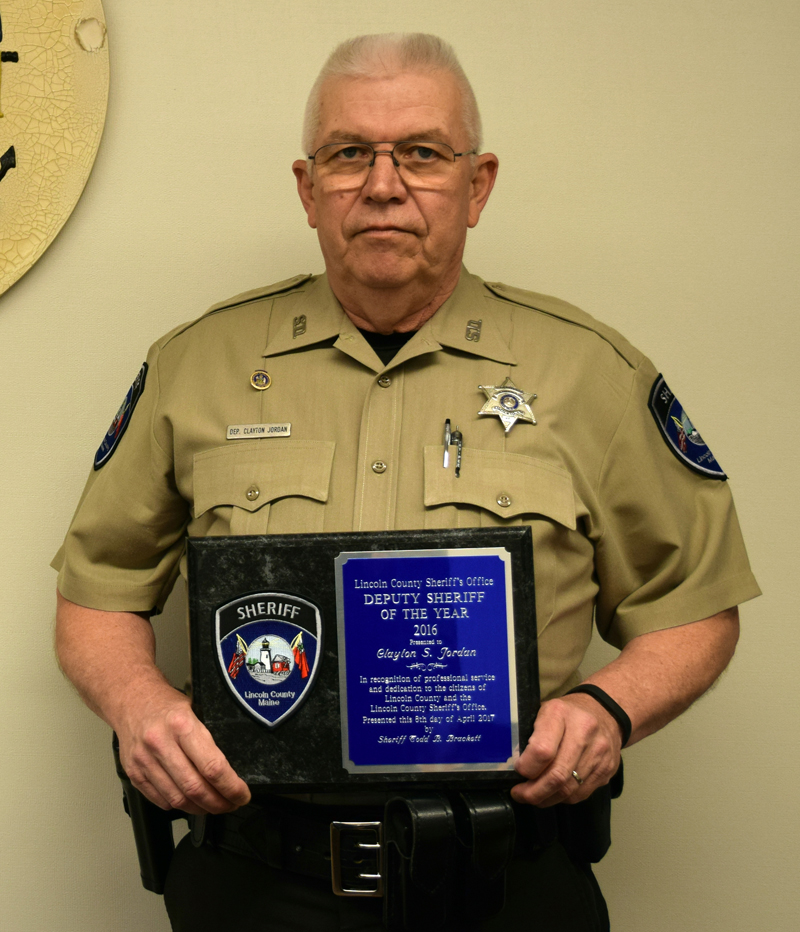 One day the pair responded to a complaint of two men siphoning gas from a car in the driveway of a home on Route 17 in Jefferson. The homeowner frightened the men and they ran down the road.

Jordan and Heidi arrived and tracked the men down the road before Heidi turned into the roadside ditch. Suddenly, one of the men jumped out of the tall grass with an aluminum baseball bat cocked and ready to swing.

“Heidi took a full-mouth bite right in the armpit,” Jordan said, and he arrested the man. Later, Jordan and Heidi found the men’s car where it had run out of gas, and the other man hiding in the woods nearby.

On another occasion, a Damariscotta police officer radioed the county for help breaking up an out-of-control party at the Blue Haven trailer park.

Four deputies and the officer went in to break up the party, and two men immediately jumped one of the deputies and tried to take his gun. Soon it was an all-out brawl – “a melee on a Saturday night,” Jordan said.

By the time it was over, there were five people in custody, two were on their way to the hospital for treatment of dog bites, “and the party was done,” he said.

Jordan and Heidi belonged to the U.S. Police Canine Association, which keeps data on police dogs. At one time during her career, Heidi “was the best on the East Coast in person finds,” Jordan said.

“She had around 80 lost people finds and over 100 felony tracks in her career,” he said.

“In Heidi’s prime, I could go to a mother or father with a lost child and say that we’d have them before we left the area,” he said. It sounds cocky, he admits, but it was true.

Heidi became a local celebrity with a following among readers of The Lincoln County News. She would even respond to the odd request for non-emergency services, like the time she found a Jefferson woman’s engagement ring.

Jordan worked with Heidi for about eight years, until her death from cancer. He worked with a second K-9, Kali, another German shepherd, for several years thereafter, again paying for the dog and their training out of his own pocket. 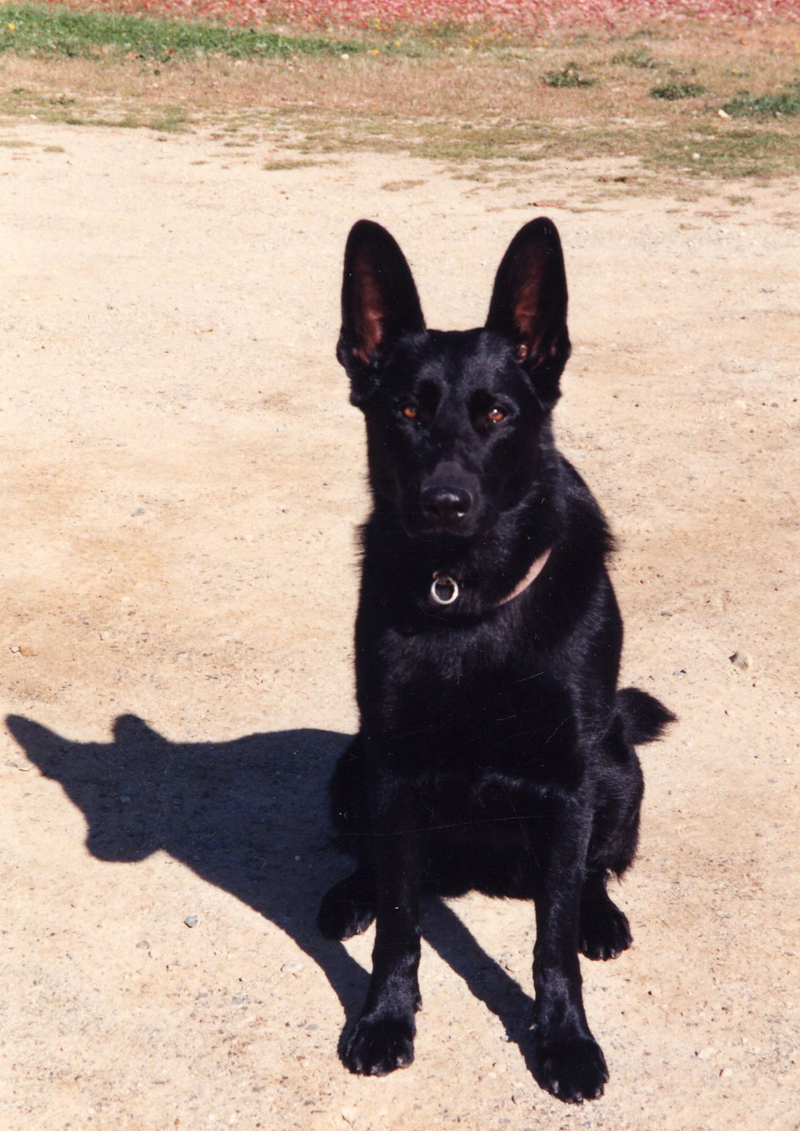 These days, deputies no longer have to pay for their own dogs. The Heidi K-9 Memorial Fund pays for the county’s K-9s and outfits them with bulletproof vests.

Jordan resigned in 2002 and went into business for himself as a carpenter. In 2012, the sheriff’s office recruited him to come back and work in the court system.

His primary assignment is to provide security for District Court Judge Barbara Raimondi. He also sometimes transports inmates from Two Bridges Regional Jail to the courthouse and back.

The sheriff’s office command staff – the sheriff, the chief deputy, and the two lieutenants – chooses the Deputy Sheriff of the Year. The award recognizes a deputy’s performance throughout the year.

The command staff reviews recommendations from the sergeants, as well as performance evaluations and feedback from the community.

In Jordan’s case, the sheriff’s office has received positive comments from judges, prosecutors, and defense attorneys alike, according to Lt. Michael Murphy, who oversees the county’s court security operation.

The Deputy Sheriff of the Year recognition was “very much a surprise,” Jordan said. “It’s an honor.”

Looking back on his career, Jordan is most proud of being able to help people, he said. More than any arrest, the times he and his K-9 partners were able to find children and elderly people and reunite them with their families were the most satisfying.

Jordan doesn’t miss being on the road. He is content to leave the occasional fight or foot chase to the younger deputies. He enjoys his work at the courthouse and plans to stay on the job as long as he continues to enjoy it.

Off duty, he likes to work with wood, building cabinets and furniture. He lives in Whitefield with his wife of 26 years, Beth. They have three adult children and two grandchildren.

In recent years, the sheriff’s office has had two police dogs. Detective Scott Hayden’s K-9 partner, Koda, retired last year, and it now has just one, Duke, who works with Deputy Kevin Dennison. The agency hopes to add another as soon as late 2017.

To donate, send a check payable to the Heidi Memorial K-9 Fund to the office of the Lincoln County treasurer, P.O. Box 249, Wiscasset, ME 04578.