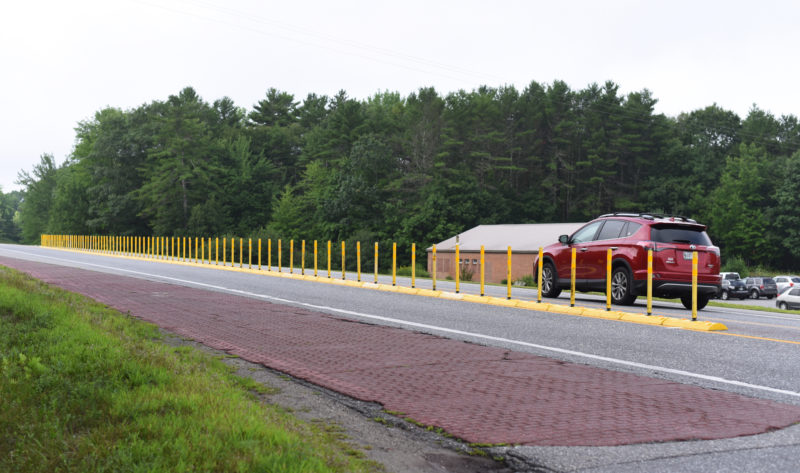 The new barrier at the intersection of Route 1 and Belvedere Road in Damariscotta on Thursday, Aug. 2. (Jessica Picard photo)

DOT officials described the yellow barrier as a “plastic curb with delineators.” The curb has the appearance of a long, plastic speed bump, while the numerous “delineators” are vertical plastic rods.

“There were a significant number of crashes,” David Allen, DOT regional traffic engineer, said of the Belvedere Road intersection.

A motorcyclist was seriously hurt and had to be LifeFlighted to Maine Medical Center in Portland in such an accident June 3.

“They recognized the pattern that was happening,” Allen said of the Damariscotta Police Department, which assisted with the safety audit.

Damariscotta Police Chief Jason Warlick said the barrier creates the perception of a narrower road, which will make drivers more likely to slow down at the intersection and less likely to pass vehicles turning onto Belvedere Road.

“I’m excited … I think we’re going to have positive results from this,” Warlick said.

The DOT will remove the curb in the winter for plowing and reinstall it in the spring, according to Allen.

A previous change resulting from the 2016 audit was the 2017 installation of a red flashing light at the top of the stop sign at the intersection of Route 1 and Main Street.

Future improvements to the road will include the addition of a centerline rumble strip, Allen said. The strip will be added the next time the road is paved.

According to DOT Press Secretary Ted Talbot, the road may be considered for light paving treatment in 2020.

“If it’s not suitable for a light treatment, then it will be considered for a heavier treatment at some point beyond 2022,” Talbot said. “We’ll know more next spring.”