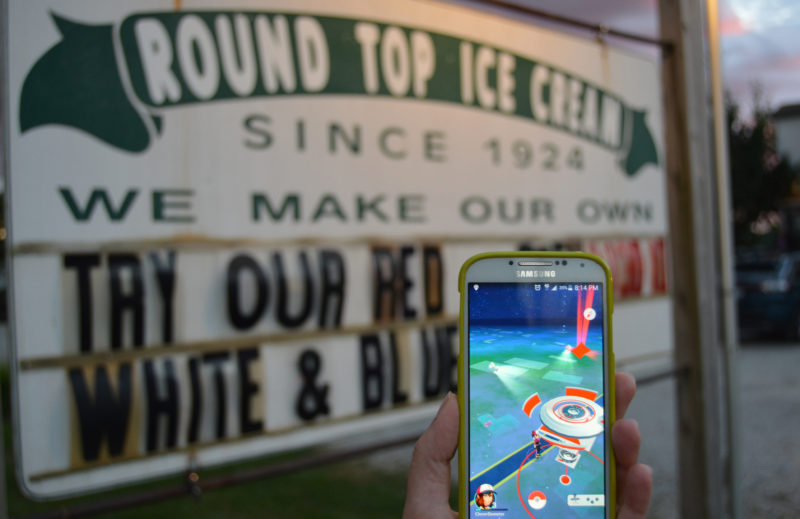 Round Top Ice Cream is a Pokemon Gym in the Pokemon Go app. As of Tuesday, July 19, the gym remains under the control of Team Valor, one of three teams within the game that battle for control over the gyms. (Haley Bascom photo)

A new species has invaded Lincoln County, causing people of all ages to search the county and catch them all. But only those with a smartphone or tablet can see them – Pokemon.

Niantic, a software development company based in San Francisco, launched Pokemon Go on July 6. The app allows people to catch Pokemon in the “real world.”

Pokemon began in 1995 as a Game Boy video game in which players collected “Pokemon,” fictional animal-like creatures, often with special fighting powers, that could be used for battles.

Using GPS technology, Pokemon Go players can find Pokemon throughout the country and use them to battle over “Pokemon Gyms.”

The app uses augmented reality technology, meaning Pokemon appear to pop up in a player’s surroundings when viewed through a phone. Players can see if a Pokemon is nearby in the bottom right-hand corner of the screen, but must move around to find them, then swipe a “poke ball” that appears on the app to throw it and catch them.

The app also has placed “PokeStops” where players can collect items like poke balls, eggs, and potions to advance in the game. PokeStops are found at popular landmarks or public buildings, like the Skidompha Library in Damariscotta. 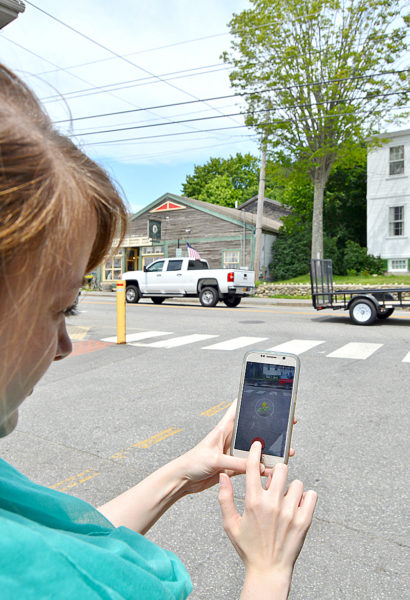 Pokemon Go enthusiast Amber Clark, of Newcastle, attempts to capture a Pokemon called Bellsprout by throwing a Poke Ball at it across the street from S. Fernald’s Country Store in downtown Damariscotta on Monday, July 18. (Haley Bascom photo)

Amber Clark, of Newcastle, is a longtime fan of the Pokemon series who collected all 720 Pokemon in the Nintendo DS game – a feat that took her many years and a lot of patience. She said she didn’t have a lot of hope for the app, which is a much different platform than the original games, but is so far impressed.

The app has been praised by some to promote exercise and get people out and about, even making new friends at PokeStops, Pokemon Gyms, or when trying to catch the same Pokemon. Some features of the app require players to walk a certain distance – for an egg to hatch, for example.

Clark said she and her husband have always enjoyed walking, but Pokemon Go is “definitely making me walk a bit longer.”

The Pokemon Gyms are locations found on the app that, like PokeStops, are public buildings or landmarks. Locations in the county range from fire stations, like the Bristol Fire Department’s station in Round Pond, to historic buildings, like the Chapman-Hall House in Damariscotta.

Once players hit level 5 in the game by collecting enough Pokemon and gaining experience, they can join a Pokemon Gym, which is controlled by one of three teams: Valor (red), Mystic (blue), or Instinct (yellow).

Once part of a team, players can attempt to take over other gyms for their team, using their Pokemon to battle other players’ Pokemon, as in the original Game Boy game.

While Pokemon Go has increased exposure for many of the real-life locations in the game, the feature has come with some backlash.

“People need to look where they are going and be respectful of their surroundings,” said Clark. The app warns players to do so, but incidents around the country have arisen regarding dangerous behavior or players frequenting memorials or potentially dangerous locations.

“That’s something the company needs to work on,” said Clark, adding that perhaps as the game develops, the developer will find a way to limit the Pokemon to appropriate areas.

Throughout the country, there have also been incidents such as car accidents and trespassing. The app has resulted in three separate incidents of players finding the bodies of missing persons throughout the U.S.

According to the Lincoln County Sheriff’s Office, no accidents or other incidents have been reported involving Pokemon Go in the county.

Lt. Rand Maker said he has seen more pedestrians walking around with their phones out and “can only assume what they’re doing.” He has heard of incidents around the state involving Pokemon Go, but said Lincoln County has not had any problems yet.

While the app is getting players to frequent public locations more, it remains to be seen whether businesses in Lincoln County are profiting from the surge in foot traffic.

Round Top Ice Cream is a Pokemon Gym, according to the app, and while employees have seen more people around the ice cream shop, they haven’t necessarily seen an increase in sales.

Employee Christy Grover, 17, said she saw a group of people out on the deck of the ice cream shop a couple nights ago, “but they didn’t buy anything.”

Gormley said Skidompha’s new visitors aren’t necessarily using the library’s services. “They come in, they collect their Pokemon, then they leave,” she said. “But it’s exposure.”

But some local businesses are trying to capitalize on interest.

Smitten Collectibles & Nerdy Treasures, of Damariscotta, has been stocking more Pokemon merchandise. Owner Susan Chalmers said her eBay store has seen a great increase in Pokemon-related sales and she hopes to see the same at her Damariscotta store. She recently ordered back-to-school Pokemon merchandise and Pokemon Halloween costumes.

Chalmers, a Pokemon Go player, has even used the app’s features to draw attention to her business.

“I just put a lure out at the (Damariscotta United) Methodist Church,” she said, near her shop on Hodgdon Street.

“Lures” attract Pokemon to a PokeStop, like the Methodist church. Players see lures as a pink mist surrounding the PokeStop on their screen. Players looking to increase their chances of catching Pokemon will go toward lures.

Chalmers hopes that by increasing foot traffic by her store, more people will stop in.

Chalmers said she thinks that as a whole, the app has been positive for a lot of people who may not get out and engage in their community often.

While it may be too soon to tell the full consequences of Pokemon Go in Lincoln County, for better or worse, it’s clear that even though the Pokemon are invisible, their impact is not.

“There’s so much darkness that’s going on right now,” said Chalmers. “It’s nice to see something that brings people together that’s positive.”