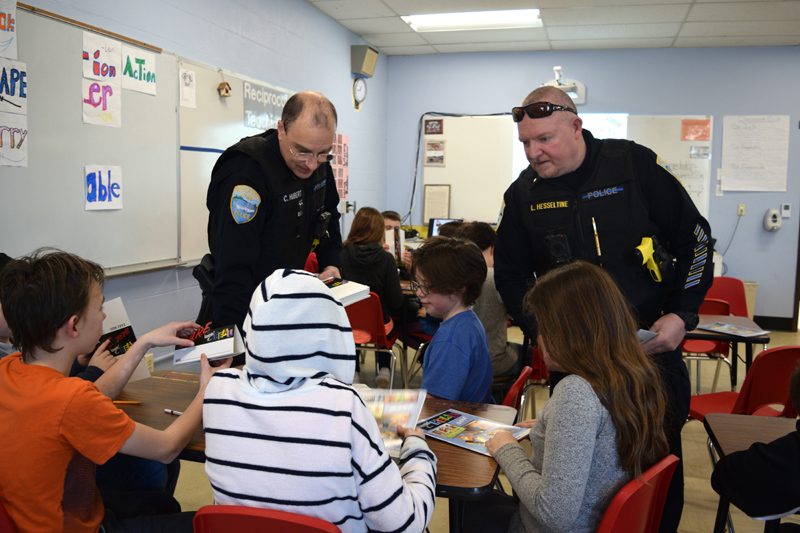 “Since I have been doing D.A.R.E., it has become my favorite part of my job,” Hesseltine said. This is his fourth time teaching the program. The previous three were all at Miller School in Waldoboro, when he was an officer in that town.

“The biggest struggle for me, to make a decision whether to leave Waldoboro or not, was to leave that D.A.R.E. program. That’s the impact coming to the school has for me,” he said. He started work in Wiscasset in September 2018.

The program was previously implemented in Wiscasset schools. Wiscasset School Committee Chair Michael Dunn said at the Feb. 12 school committee meeting he was unsure when it was last in effect, but it was before the Wiscasset School Department split from RSU 12.

At the beginning of the first class, Hesseltine introduced himself and School Resource Officer Cory Hubert and the students learned about the program’s motto: “Keeping it real.”

“Some (stories) might be sad, some might be funny, but they are all going be real,” Hesseltine said before sharing a personal story about a state trooper’s “act of compassion” that made him want to become a police officer.

One of Hesseltine’s goals as he teaches the program is to take away the fear some students have of police officers.

The first lesson was on the D.A.R.E. decision-making model that also spells out the program’s name: define, access, respond, evaluate.

Before the next class, students will create a D.A.R.E. box, with a hole at the top. Students can write questions for Hesseltine on a slip of paper during the week and he will answer them at the beginning of each class.

In the upcoming weeks, students will work in their D.A.R.E. program planner, which has scenarios and prompts for students to complete. Hesseltine also plans to bring his cruiser in for a show-and-tell and to hold a class outside.

At the end of the eight to 10 weeks, the students will “graduate” from the program.

Two classes with a total of 27 students heard from Hesseltine on Thursday. Hesseltine said he thought the first class went well and most of the students responded by giving two thumbs up.