Emergency crews secure the scene on Valley Road from a major crime unit incident that occurred near Route 17 in Somerville on the morning of Wednesday, June 30. (Bisi Cameron Yee photo)

The Maine State Police is investigating a homicide that resulted from an altercation in Somerville the morning of Wednesday, June 30.

The altercation took place at a home at 1041 Rockland Road sometime between 9:30 and 10 a.m., according to a press release from the Maine State Police.

Joel Williams, 48, who was staying at the address at the time of the incident, died as a result of gunshot wounds, according to the press release. Following an autopsy on July 1, the Office of the Chief Medical Examiner in Augusta ruled Williams’ death a homicide.

Kyle Hunt, 31, of Jefferson, was also injured in the altercation. Hunt was treated for non-life-threatening injuries at Maine General in Augusta and released, according to the press release. 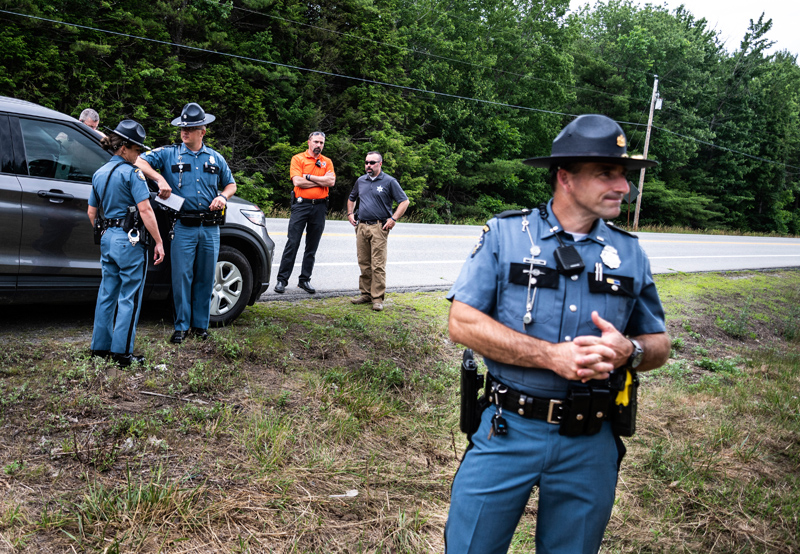 Officers and investigators from the Maine State Police and the Lincoln County Sheriff’s Office arrive at the scene of a homicide in Somerville on Wednesday, June 30. (Bisi Cameron Yee photo)

Jefferson Fire and Rescue, the Lincoln County Sheriff’s Office, and state police responded to the address on Rockland Road and to a related scene on Valley Road, approximately 1-2 miles away, on June 30, according to Shannon Moss, spokesperson for the Maine State Police.

There have been no arrests or charges filed in the investigation. In an email on Tuesday, July 6, Moss said the Maine State Police Major Crimes Unit continues to investigate the circumstances of Williams’ death.

“All of the evidence, interviews and autopsy results will be reviewed in consultation with the Maine Attorney General’s Office,” Moss said in the email. “At this time there is no other information we can release that would not compromise the integrity of the investigation.”