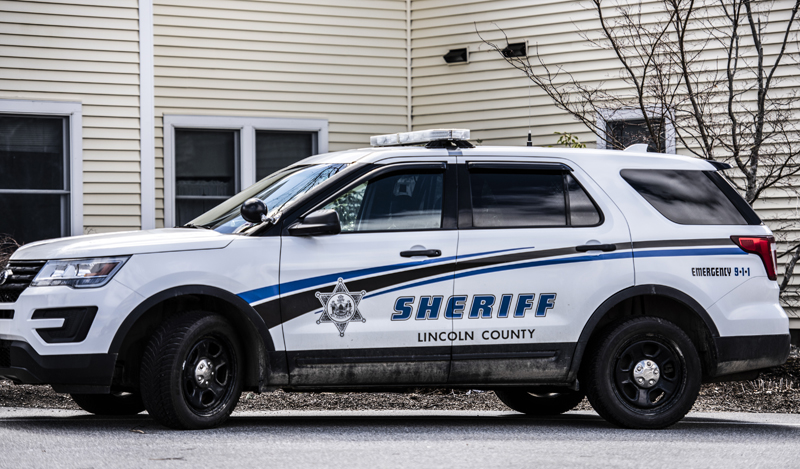 A Lincoln County sheriff’s cruiser waits in the parking lot of the Lincoln Home in Newcastle. The sheriff’s office and local police departments are facing recruiting and retention issues that in limited cases have required departments to implement on call systems when unable to have officers on active patrol . (Bisi Cameron Yee photo, LCN file).

On Aug. 30, a motorcycle went off the road in Wiscasset. According to Wiscasset Police Chief Larry Hesseltine, the injured motorcyclist lay in a ditch for hours before recovering enough to seek help on his own.

There was no initial 911 call to alert the Wiscasset Police Department that someone was in trouble. And, more critically, there were no police officers patrolling the town’s roads to see the debris strewn across the asphalt, to locate the victim, or to provide the aid he needed.

Eventually, the motorcyclist was able to call 911 and survived, but the scenario could have been very different.

Hesseltine said his department struggles to provide 24/7 coverage. A limited on-call system is in effect for those hours when they don’t have enough officers to fill the schedule.

According to Hesseltine, that motorcycle crash happened during one of those gaps in coverage.

There are coverage gaps in Waldoboro, too. Chief John Lash said the Waldoboro Police Department provides 24-hour service to its residents, but like Wiscasset, some of that time is staffed using an on-call model.

There are certain days and certain times where the town may not have an officer on the road and during those times, Lash said, police response could take up to 45 minutes.

Robert Hasch, chief of the Boothbay Harbor Police Department, reached by email, said his department is currently down two officers. “As with many other departments it has been a tough challenge maintaining adequate coverage, and we find it necessary to continuously re-shuffle our schedule,” Hasch said.

Lincoln County Sheriff Todd Brackett said his office is facing the lowest staffing levels of his tenure, down seven officers at one point.

He said he’s filled four vacancies, but that does not mean the officers are available on the streets yet. They are still in the field training process, which can take several months.

“This is a crisis, folks,” said Jason Warlick, chief of the Damariscotta Police at a recent Damariscotta Board of Selectmen meeting. “There is a substantial shortage in actual police presence on the streets county-wide.”

Every police chief in Lincoln County is concerned about staffing levels. And every department is facing challenges recruiting and retaining the number of officers necessary to fully patrol their towns and respond consistently to emergency situations.

While the Damariscotta and Wiscasset departments may be fully staffed according to their current budgets, the Lincoln County Sheriff’s Office and the Waldoboro Police Department have not had a full complement of patrol officers in a year or more.  But even the departments that are staffed are indicating that it’s not enough. Those gaps in coverage still exist.

The job has changed. There are more calls, more arrests.

“We’ve made 250 arrests so far this year, and things aren’t slowing down,” Hesseltine said. “People are angry. Road rage is up.”

Operating under the influence arrests are “through the roof,” he added. In Wiscasset, there have been 35 OUI arrests so far this year, with eight in the past two weeks.

Those arrests can tie an officer up for 90 to 120 minutes, according to Hesseltine.

Some deputies are working 60-70 hours a week, according to Brackett, but he is less concerned about overtime than about burnout.

Neither the Wiscasset schools nor Lincoln Academy have a dedicated school resource officer. Waldoboro still does, but Lash said that officer is likely to be pulled in response to emerging situations.

The reverse is true in Wiscasset now as police officers will need to be pulled from patrol to respond to the school, according to Hesseltine.

“There’s a lot going on in the law enforcement world right now,” said Brackett. His office is facing competitive wages at other agencies and in other industries, and losing experienced officers to retirement.

“Law enforcement isn’t as romantic a profession as it used to be,” he said, pointing to the broad brush that has painted people’s recent perceptions of the profession.

According to Wiscasset Town Manager Dennis Simmons, recent social justice issues and movements like Defund the Police haven’t helped. “When there’s a perceived lack of public support, why would people go into the profession?” he said.

“It can be a very, very thankless job,” she said.

But it is wages that are the critical factor. “The guys want to be paid like professionals,” Lash said. “We’re doing a dangerous job.”

Warlick went to a board meeting on Oct. 20 to ask selectmen to consider an additional 15% pay increase outside the recently implemented three-year union contract.

Warlick is concerned that as other agencies like the Waldoboro Police Department and the Lincoln County Sheriff’s Office begin negotiations, Damariscotta will fall behind the pay scale and risk losing qualified officers. “We need to be focused on keeping our staff, who knows our community,” Warlick said.

There are other significant factors impacting the shortage of qualified officers.

Rick Desjardins, director of the Maine Criminal Justice Academy, said the academy is still dealing with the backlog caused by suspending in-person training during the initial months of the pandemic.

Limitations on class size and difficulties fielding quality volunteer instructors from law enforcement agencies throughout the state are consistent contributors to the backlog. That ability to source instructors is exacerbated further by the staffing pressures that agencies are facing.

“We’re running as quickly as we can to get cadets through the program,” Desjardins said.

The academy just graduated a record 67 cadets. But there are already 140 requests for roughly 70 slots for the next class.

“The shortage of individuals interested in going into the profession is another edge to the sword,” Desjardins said.

According to Desjardins it’s not the pandemic, or even the negative view of policing on the part of the public. It’s “the slow move towards a shrinking number of applicants across the country.”

Economics is a part of it, he said. And the fact that applicants who meet all the entrance standards are “really, really employable” in other industries.

There are members of law enforcement who still look ahead with optimism.

Desjardins hears the same motivation from cadets he’s always heard: The desire to help. To serve. To be that resource for their communities. “That has not changed,” he said.

Officer Nathan Willhoite, a rookie with the Wiscasset Police Department who is also a pastor, said he finds the work rewarding. He likes stopping people from being hurt. But it’s not uncommon for him to work 50 to 60 hours a week. Or more.

“We could really use another guy,” he said.

Brackett said that despite staffing issues, there has been no interruption in coverage. “We haven’t missed a public safety call, and we don’t plan to,” he said.

Nevertheless, the situation needs a resolution. Lash said officers can’t always routinely respond to general EMS and fire calls as they have in the past.

Lash said if things keep going the way they are, there will be some calls the police may no longer respond to, such as alarm activations from residences with a history of false alarms, or traffic control calls.

“If no (officers are) on the road, how can I catch speeders? Waldoboro has 110 miles of road, and one guy working … We don’t have manpower to run traffic,” Lash said.

“The public needs to get out and vote,” Hesseltine said. Only 400 residents out of approximately 3,800 voted in Wiscasset’s most recent election. And the town lost its school resource officer by four votes.

“I believe if something’s changing in our town, we need to tell our residents,” Keizer said. “You can be much better prepared if you know what’s going on. Put up the lights that come on when there’s movement, lock your doors, learn first aid.”

“When emergent situations occur, be patient. If we don’t show up in a timely manner we might be doing something else that’s more urgent. Be more vigilant … check on your neighbors. Be more aware of your surroundings and safety issues. Understand what the police are going through,” Lash said.

“I’m not going to fix it individually as a town manager,” Simmons said. But he believes that if all the stakeholders, including regional town managers, police chiefs, the county, the state, and especially the public approach the problem collectively there may yet be a solution. “But if you want effective, efficient, law enforcement, you need to be involved.”