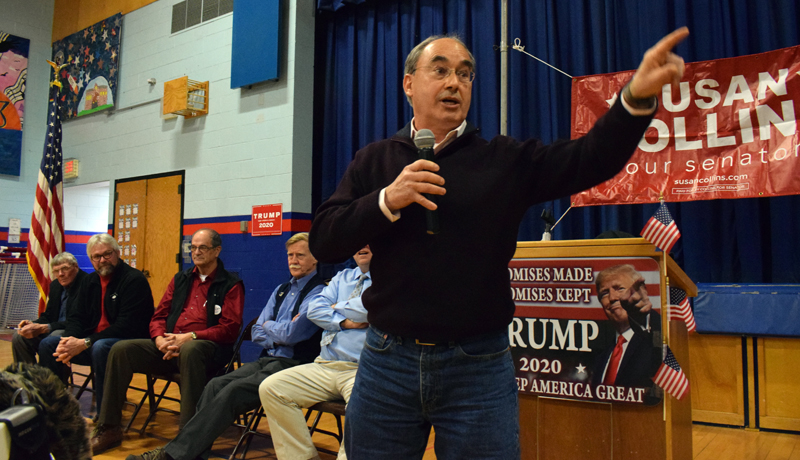 Nearly 100 people attended the caucus for most Lincoln County towns to hear speeches in support of President Donald Trump and other Republican candidates and elect delegates to the state convention at Great Salt Bay Community School in Damariscotta on Saturday, Feb. 29.

There was a table set up at the caucus to collect signatures for a people’s veto of ranked-choice voting in Maine  for the 2020 presidential election.

All of the Republican speakers spoke to the importance of getting out the vote. Among the speakers were Demi Kouzounas, chair of the Maine Republican Party; Dr. Jay Allen, candidate for the 1st Congressional District; state Sen. Dana Dow, minority leader of the Maine Senate; state Rep. Jeff Hanley, of Pittston; former state Rep. Jeff Pierce, of Dresden, who is running to regain his seat this year; state Rep. Dick Bradstreet, of Vassalboro; House District 91 candidate Lowell Wallace, of Waldoboro; and former state Rep. Deb Sanderson, of Chelsea.

Poliquin said he is not running for office again because he is busy caring for his mother and father.

Poliquin gave an energetic 20-minute speech about the importance of voting Republican.

There are three candidates for the Republican nomination for the 2nd Congressional District: Adrienne Bennett, of Bangor, Eric Brakey, of Auburn, and Dale Crafts, of Lisbon.

Poliquin said he will not endorse a candidate or participate in fundraising until the party chooses its nominee.

Poliquin talked about his plans to attend a dinner party that night with liberal friends.

“A lot of our friends are liberal. Now, you don’t yell at them; you put them on your prayer list,” Poliquin said to laughs.

He laid out the economic argument for Republican candidates he planned to make to his friends that night. He said the U.S. economy is the strongest it has been in 50 years and there are currently about 7 million more jobs than there are people to fill them.

“It’s because we worked so hard to lower taxes and get rid of regulations and make sure China isn’t ripping us off anymore, and we get the greatest economy in 50 years,” Poliquin said.

Poliquin said that if the Democrats win the presidency, “everyone” will lose their health insurance plan from their employer and be forced into Medicare. 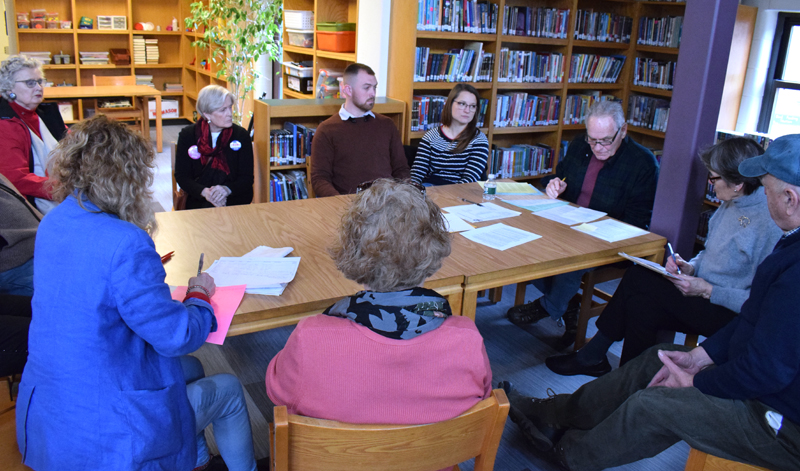 Wiscasset Republicans work to elect officers and delegates to the state convention during their caucus at Great Salt Bay Community School in Damariscotta on Saturday, Feb. 29. (Evan Houk photo)

Democratic candidates Bernie Sanders and Elizabeth Warren both have “Medicare for All” proposals, while candidates like Joe Biden and Mike Bloomberg do not propose to eliminate employer plans.

Poliquin said the only reason young people are supporting Sanders is because he is promising free health care and higher education.

He again framed his argument as if he were talking to a friend at a dinner party.

“You worked your fanny off in high school to go work in a mill. How do you feel about paying for someone else’s college and you didn’t have the opportunity to go to college yourself? That is not fair,” Poliquin said.

Poliquin then produced a prop, a container filled with chipped-up tires, to illustrate a point about climate change policy.

Poliquin said that under a Democratic administration and Congress, paper mills in Maine would no longer be allowed to operate the way they do now because of a ban on carbon emissions. He said the paper mills use chipped-up tires to burn for fuel. He said it burns so hot there is almost no residue.

Poliquin was likely referring to the Green New Deal, a congressional resolution introduced by House Democrats that lays out a grand plan to tackle climate change.

Kouzounas, chair of the Maine Republican Party, said it would be important to vote in the presidential primary March 3, although Trump is the only candidate on the Republican ballot.

She said Maine is being targeted by Trump’s presidential campaign.

“We’re one of 16 states that are targeted by the administration. … They felt that Maine and New Hampshire will go for Trump,” Kouzounas said.

Kouzounas said that on average, 25% of people who attend Trump’s campaign rallies are Democrats. Attendees at the rallies have to provide information about themselves in order to receive a free ticket. 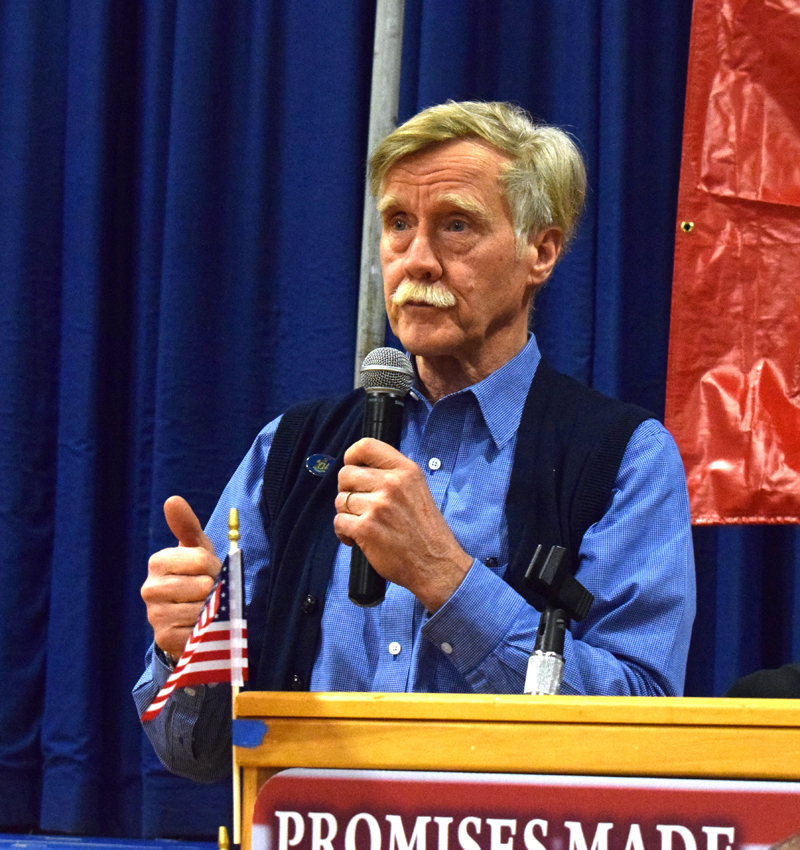 Allen then spoke to the dangers of socialism in the Democratic Party as an inspiration for him to run for Congress, saying the Democrats’ policies will “destroy our country.”

Allen described U.S. Rep. Chellie Pingree, the incumbent in the 1st Congressional District, as a threat to the nation.

“I’m going to go send her home, because she needs to go home,” Allen said.

Dow described the current batch of state candidates and his own candidacy for reelection.

“We have a real good slate of candidates. And the national organization feels that we’re one of five states that has a chance to retake the Maine Senate. With the good candidates we have, I think that’s a great possibility,” Dow said.

Dow urged Republicans to run as clean elections candidates, with state funding rather than private donations.

“You need to, because without doing so, you stand a good chance of not getting elected. There’s too much money involved, unfortunately. This is the state of Maine and you just can’t go out and raise $60,000. And that’s what it takes to win one of these Senate candidate elections,” Dow said.

The event included lunch and desserts, a 50-50 raffle, and a Trump door prize raffle.