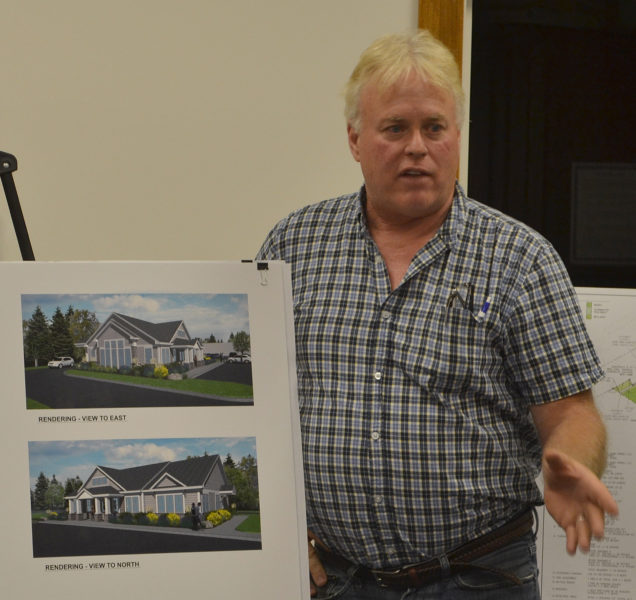 There was standing room only at the Damariscotta Planning Board meeting on Monday, Aug. 7, as a Portland developer presented his proposal for the property at 435 Main St.

Commercial Properties Inc. CEO Daniel Catlin appeared before the board to discuss the master plan for the property. The construction could occur in phases over a period of years, depending on when he finds tenants for the spaces. After meeting with Town Manager Matt Lutkus and Town Planner Tony Dater last year, Catlin decided to present the plan as a whole, rather than return to the board for each new phase.

Prior to the presentation, planning board Chair Jonathan Eaton told the audience there would be no public comment, as it was the planning board’s first time hearing details of Catlin’s plan. He asked the audience to save their comments and questions for a future public hearing.

“This is one of the largest developments we’ve had in Damariscotta. It’s going to be a lengthy ordeal,” Eaton said.

Throughout the meeting, however, members in the audience expressed both approval and disapproval of Catlin’s statements, and of each other, until Eaton intervened.

Catlin, who has over 24 years of experience in real estate brokerage and development, has been with Portland-based Commercial Properties Inc. since 1998. Some of his other developments include lots at the Topsham Fair Mall.

Catlin’s plan for 435 Main St. calls for the construction of three commercial buildings:  a 22,000-square-foot-building for two retail stores, a 5,525-square-foot building with three retail spaces, and a 2,700-square-foot bank with a drive-thru.

Catlin said he focuses mostly on services and health care, which are “big drivers of brick-and-mortar,” as tenants for his buildings and does not rely as much on retail businesses.

The bank would be a “ranch-style” building, he said. He said he has been working closely with the bank for the design, but could not disclose which bank is interested.

“I have not signed a tenant, but I have been directed by someone to put this whole thing together,” Catlin said. “I’m not at liberty to divulge who this is, but they are very excited to come to Damariscotta.”

Catlin is working to find tenants for the 22,000-square-foot building and said he had a “strong indication” of interest from clients he has worked with in the past.

The 5,525-square-foot building is “a bit of a wild card” and Catlin will continue to pitch it to different businesses, including local businesses, he said.

“I would certainly be willing to talk with anyone locally who would possibly want to move in,” Catlin said. “I certainly want this to be a positive thing for everyone.”

The two larger buildings would be built with pre-engineered steel, and the interior walls could be adjusted based on tenant needs, Catlin said.

Planning board member Shari Sage asked whether the buildings could be repurposed if a tenant leaves.

Catlin said the buildings could easily accommodate a change in tenants.

The plan also calls for an “extensive” landscaping plan both in the development itself and along the Main Street frontage, Catlin said. As he said when he introduced himself to the board in April, Catlin reaffirmed that he would be willing to build a sidewalk along the property’s Main Street boundary.

Planning board member Adam Maltese asked about the road to the Lincoln County Rifle Club, which runs through the site of the proposed development. Catlin said he is talking to the rifle club about relocating the road. He said he would pay to build and maintain a new road. In addition, he would pay for a gate at the entrance to the road.

The town’s site plan ordinance calls for parking lots to be behind or to the side of buildings in an effort to separate parking areas from the frontage road, but Catlin’s plan calls for parking in front of the 5,525-square-foot building, which faces Main Street. Catlin said the design is “in keeping with the neighborhood,” including Hannaford and Main Street Centre.

Catlin expressed concern about customer safety if the parking is moved from the front of the building, as it would result in longer walks from vehicles to the front door, which could be dangerous in inclement weather. In addition, operations, loading, and storage areas are typically located in the back of the buildings, Catlin said.

After some discussion with the board about ways to reposition the buildings, Catlin said having the parking at the front of the building would be both safer for customers and fit within the neighborhood, which drew a negative response from some in attendance.

“I think the large group you’re seeing here tonight is a reaction to the way the town has evolved,” Maltese said in response. “I think there’s a lot of interest in trying to think outside the box, not necessarily to design a town that looks like every other town in America.”

Catlin said he hopes to have more discussions with town staff and the board about the development. Both Maltese and Sage suggested that Catlin study Freeport’s commercial developments.

The planning board has scheduled a public hearing on the project for Monday, Sept. 18 at 7 p.m. A location with more space to accommodate the expected turnout will be announced in the upcoming weeks.

The planning board will hold its next regular meeting at the town office at 7 p.m., Monday, Sept. 11.