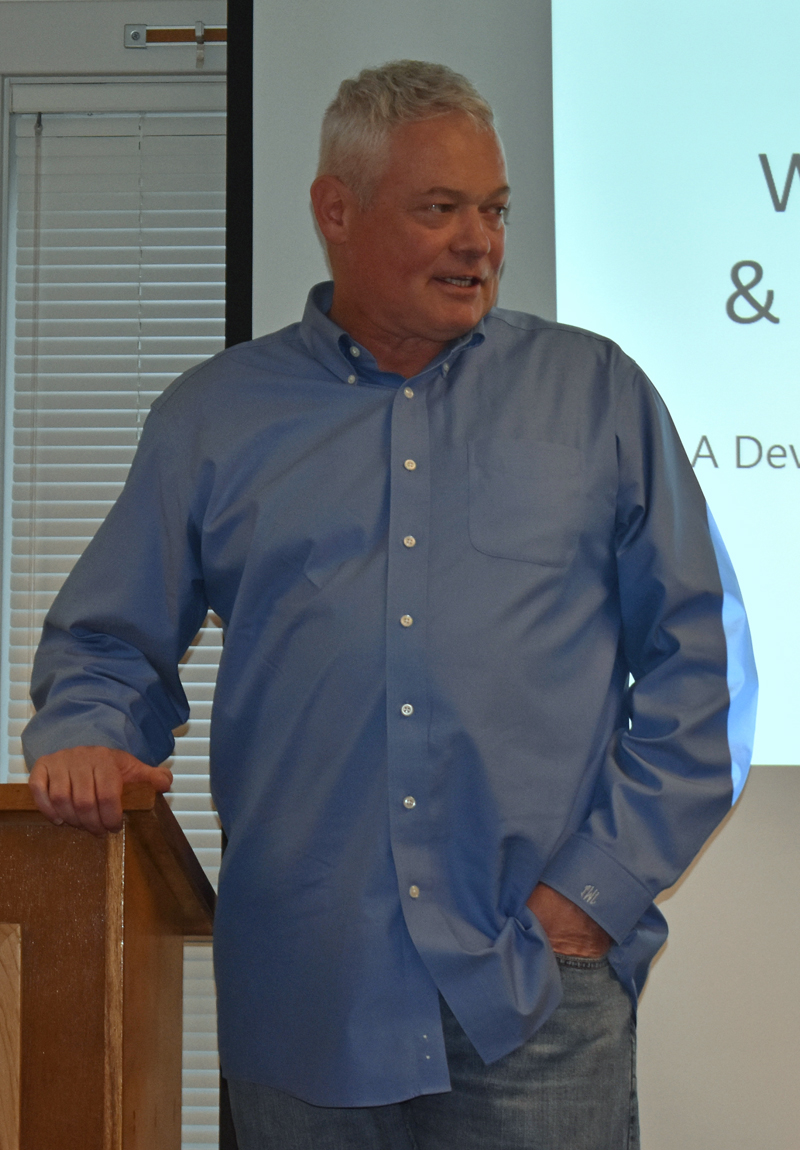 Portland developer Tim Wells discusses his plans to convert the former A.D. Gray School into condominiums at a meeting with the Waldoboro Planning Board on Sept. 11. (Alexander Violo photo)

A Portland developer presented his concept to convert the long-vacant A.D. Gray School into housing to the Waldoboro Planning Board on Sept. 11.

The three-phase project would follow the conversion to housing with the development of a subdivision and potentially the construction of other commercial or residential buildings.

The developer, Tim Wells, hopes to acquire the 84-year-old, 30,000-square-foot school and 1.6-acre property from the town.

The impetus for this phase lies in the lack of housing, especially for rent, on the Midcoast, Wells said.

He does not expect to file a formal application with the planning board for about a year, saying he has more work to do first.

“It depends on what I am able to do and who I am able to get in as tenants,” Wells said, referring to when he would come back to the board with an application.

“The idea is to bring more people to Waldoboro and to offer different types of housing, repurposing the school into condos, and to bring a type of living that is not available on the Midcoast, really anywhere,” Wells said.

He said the project would offer housing to a workforce that could help businesses and the town grow.

“It’s really important in Maine. Our wages aren’t equal to other parts of the country,” he said.

Wells believes the development would attract people of all ages.

The second and third phases to the project will depend on what businesses Wells can attract to the property. He said the area has vibrant agriculture and aquaculture industries, and a future commercial space could be used for food processing or research.

A diagram shows other potential uses of the property: more residential space, office space, a small hotel, and the subdivision.

“The other phases will happen later, but they require a lot of work and economic development to make them happen,” Wells said.

Max Johnstone, a planning consultant to the town, said Well’s proposal is allowable under town regulations, although Wells said he would need some variances.

The former school has been vacant since Medomak Middle School opened in 2009. The town has debated what to do with the property, which has been on the market since early 2018.

Johnstone said Wells has met with the Waldoboro Board of Selectmen in executive session and a committee focusing on the future of the property has also met.

According to Johnstone, the idea for a preapplication meeting with the planning board arose during a committee meeting.

The committee consists of two selectmen, two residents, and the town manager, according to Robert Butler, chair of the board of selectmen and a member of the committee.

Wells said he understands there are concerns about the state of the building, especially the interior, but he believes the structure is sound.

“The school is built like a horse. It has value. I know people have different opinions on it, but I think there has to be some way to repurpose it,” Wells said.

The structural integrity of the building has been verified by a structural engineer, according to Wells.

Wells believes development of the property would give the town an opportunity to draw traffic from Route 1 to the historic downtown.

“Who would know the downtown exists, but you have a beautiful downtown with beautiful architecture and beautiful homes. There are a lot of strengths here that could be further strengthened and reinforced through a project like this,” Wells said. 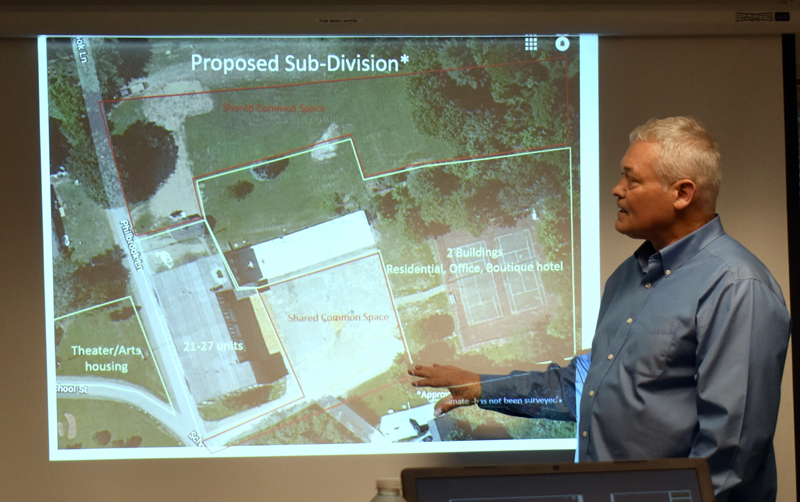 “This increases initial costs, but makes the cost of people living there lower,” he said.

Wells said his project would require some variances for height, setback, and density. He would add one or two floors to the building, which currently stands about 34 feet tall.

The Waldoboro Board of Appeals would consider the height variance.

Boardman asked if such a height would have an undue impact on the neighborhood.

According to Wells, some nearby houses are 32-36 feet high.

“I know people get nervous about height, but downtown Waldoboro has four-story buildings and this won’t put shadows on anybody’s land,” Wells said.

Board member Barbara Boardman asked about parking at the development.

Wells said parking would be shared between residential and commercial users as the project progresses, but initially there will be plenty of space for residents to park.

Board member John Kosnow asked how the developer plans to dig up the concrete tennis courts on the site.

Wells said he would use the area for parking. “The dimensions are exactly what you need for parking,” he said.

Wells said he would have to build a recreation area somewhere else to offset the project’s impact on the tennis courts. He said the town of Waldoboro received a federal grant to pay for them when they were built.

“I know (board member) Ted (Wooster) is sensitive to this and I understand its past use. It is a resource and just because people don’t use it doesn’t mean if you got a good court, people wouldn’t use it,” Wells said.

Wells said he is open to investigating how to make up for taking the space away.

Boardman and board member Sara Hotchkiss asked about traffic impacts on the dead-end road.

“It’s not as busy as you would think. I can’t dictate who lives there and don’t know if they will have two (cars) or one car. It depends on what phase of life they are in,” Wells said.

“I really want to push economic development in Maine. I’m hoping to get regional and national attention to that project by using their material here,” he said.

However, Wells said the owner of the East Millinocket operation has tax-related issues and, if the Waldoboro development goes forward, the cross-laminated timber may have to be sourced from Quebec.

Kosnow asked Wells whether, if the project progresses and additional issues related to the building come up, he would stick with the project.

Kosnow urged Wells to develop a plan for the mold.

“Mold is a big deal. It’s hard to eradicate. I want to know if it is something you have thought through,” Kosnow said.

Wells said there are two portions of the building where mold is prevalent. He believes the mold can be encapsulated or eradicated in both areas. He also said the roof of the former school has leaked, necessitating the removal of wet insulation.

Boardman asked how the exterior of the development would look.

“I want to build very attractive buildings, something that reflects the local area and its traditions. I think it will be quite warm and nice,” Wells said.

Board member James Russo asked if Wells was looking for approval or a commitment from the town for all three phases of his project or just the first phase.

Wells said the project would work better with all the phases, and a commitment from the board would be an aid to the project.

“This is an enormous investment of an intensity that Waldoboro hasn’t seen in a long time,” Wells said.