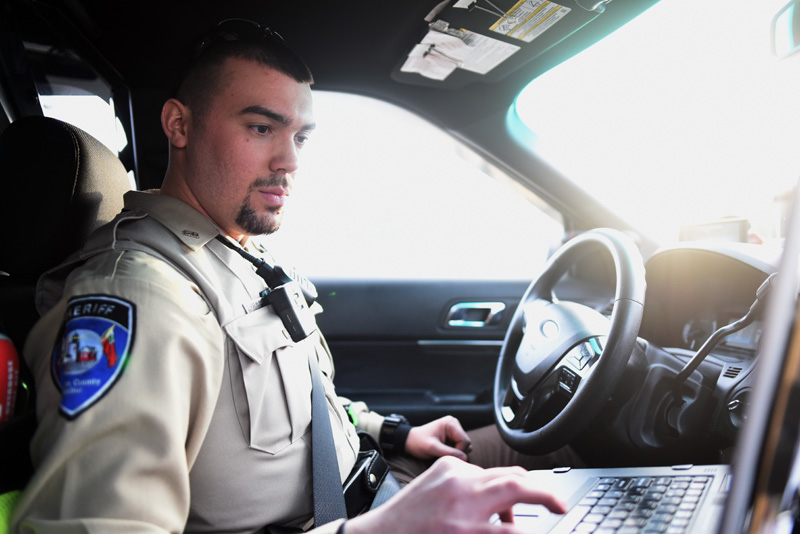 As a reporter, my interactions with law enforcement officers tend to be accompanied by flashing lights and the urgency of an emergency scene. On Thursday, Jan. 10, I was able to ride along with two Lincoln County sheriff’s deputies for a behind-the-scenes look at what it is like to be on patrol even when the scanner is relatively quiet.

I started my day at 2 p.m., traveling around the county with Deputy Chase Bosse. He had been on duty since 10 a.m. and would finish his shift around 8 p.m.

Bosse was born and raised in Brewer. A 2013 graduate of Brewer High School, he has a bachelor’s degree in criminal justice from Husson University. He joined the sheriff’s office in 2017.

At 23 years old, he is the youngest deputy in the agency. He lives in Wiscasset with his fiancee and their chocolate Lab, Leo.

Bosse said he enjoys being a sheriff’s deputy because he isn’t behind a desk and every day is different.

When there is not much going on, Bosse said the deputies practice “proactive policing,” conducting property checks, stopping vehicles, and writing reports.

We drove along, listening to the hum of the radar attached to the dash of the vehicle, which goes up in pitch depending on how fast the cars going past us were traveling.

Bosse said he prefers to work at night because the calls tend to be more exciting and hands-on, rather than mostly reports and phone calls.

He said living in the community he serves can be both positive and negative.

“When you live in your community, you definitely take your work home with you sometimes,” he said.

He said that for the most part, he thinks police are respected in the community.

“Generally, we see people at their worst … we realize that,” he said.

Bosse said many calls, especially at night, are for domestic violence and harassment.

Bosse said one misconception he thinks people have about police are that they can solve crimes as quickly and easily as characters on TV shows like “Forensic Files” or “CSI.”

“I think people think we can solve the world’s problems,” he said.

Bosse said one problem he has noticed a lot of is distracted driving, especially with cellphones.

He said many drivers are also not pulling over and coming to a stop to allow a cruiser with its lights and siren on to pass.

“The less I have to drive in the oncoming lane, the better,” he said. 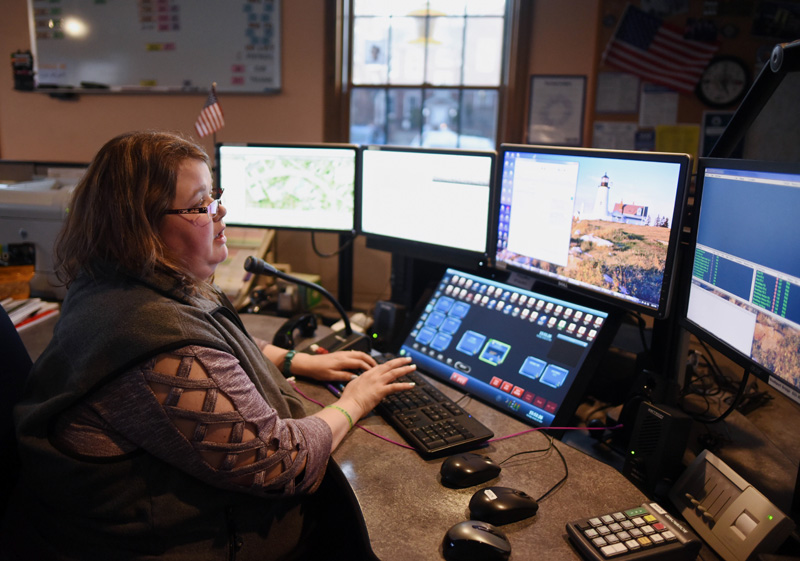 He said drivers often do not give enough space to cruisers during traffic stops either. “It’s a big safety issue,” he said.

Bosse stopped two vehicles during the ride-along, one for speed and the other for having a taillight out and a license plate covered by snow.

During the stops, I noticed Bosse repeatedly glancing behind him when walking back to his cruiser. He said that when he stops a vehicle, he is constantly thinking about safety.

“I know what’s at my vehicle, I don’t know what’s behind me,” he said. “Your head’s always on a swivel when you’re working.”

He said he tries not to think about the danger associated with the job, but rather the training he has for what to do in certain situations.

“If you think about that too much, you’re not going to be able to do the job,” he said. “You’ve got to be aware … you’re always running scenarios in your head.”

He said officers often joke with each other to lighten the mood after serious situations.

We visited the Lincoln County Communications Center in Wiscasset, where dispatchers take 911 calls and send deputies and emergency services where they’re needed.

“They’re your lifeline,” Bosse said. “I think their job is interesting, and harder than most people think.”

Emily Snowman has worked as a dispatcher for five years and sits at one of four desks arranged in a circle, surrounded by screens.

She said dispatchers need to have certain licenses and certifications, and that it takes about six months to train a dispatcher, including four weeks of training at the Maine Criminal Justice Academy.

Dispatchers learn how to administer CPR and other first aid so they can instruct a caller on what to do until help arrives.

“It’s my patient until someone with a higher level of certification than me arrives,” Snowman said.

Snowman said new technology is changing some of the ways the job is done.

People can now text 911, and a dispatcher will type questions and information back to the person.

Snowman said few people in the area have used the texting service so far. She said that while it is useful if a person can’t speak on the phone, talking to a dispatcher is faster.

From her multiple screens, she can see the phone number of the caller and the general area of where they are calling from. She said dispatchers make sure they have an address and phone number before asking about the emergency, so they can still send help if the call is disconnected.

She said one of the challenges of the job is multitasking.

“Sometimes there is more happening than I have hands to do something,” she said.

“To even sit in this chair, you’ve got to be of a certain type,” she said.

She said dispatchers have resources and people that they can speak with after a traumatic call.

She said one of their biggest fears is when an officer needs to call for assistance in an emergency situation. 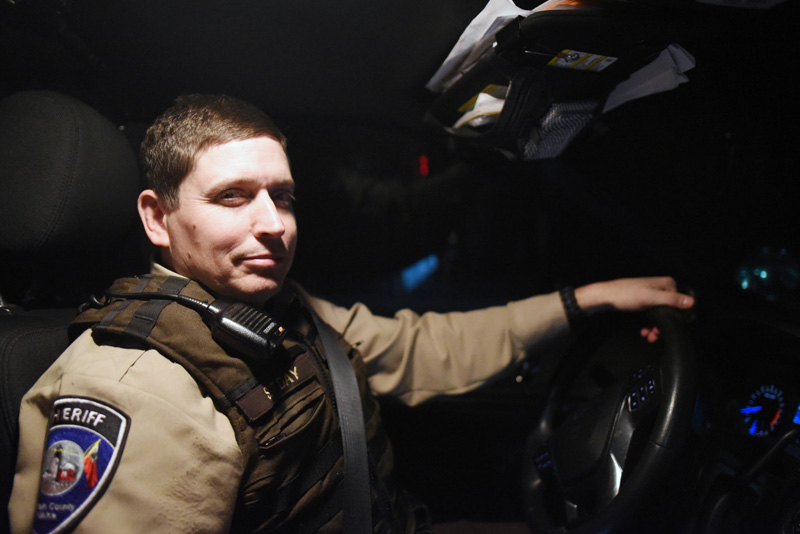 “You don’t have time to think about it until after,” she said. “We deal with some awful stuff.”

She said she tries not to focus on it too much and talks to her co-workers if something is bothering her.

“They’re my tribe and my family,” she said.

Dispatcher Bobbie Robinson, of Waldoboro, also spoke of how technology has changed since she began working at the communications center in 1986.

Instead of the multiple screens in front of her now, she used to use a typewriter to log calls. She had to input codes to page departments, rather than press an icon on a computer.

She said some callers do not realize how much technology has changed, and sometimes think they are speaking directly to a police officer rather than a dispatcher.

While technology has streamlined the job, and makes it so dispatchers don’t have to memorize as much, technology can’t replace “a dispatcher’s instinct” and awareness of what is going on.

Robinson said that she enjoys the job because it is always different, especially depending on the time of year.

“Every time you think you’ve heard it all … people can come up with some amazing stuff,” she said.

“I think people need to realize that we have a certain way we need to do our job,” she said. “Even though it may seem odd or redundant, we have certain questions we need to ask.”

I completed my ride-along with Sgt. Matthew Day, who has worked at the sheriff’s office for 15 years.

Day, of Bristol, said one change he has noticed is that officers don’t use as many codes on the radio, but instead use plain language to describe what is happening.

He said he has more calls involving drugs than when he first started. For the past couple of years he has carried Narcan, which can reverse an opioid overdose.

Another change is that younger deputies, such as Bosse, prefer to work nights.

“Back 10 years ago, everyone wanted days,” he said. “It’s younger guys that want to do more, they want to see more.” 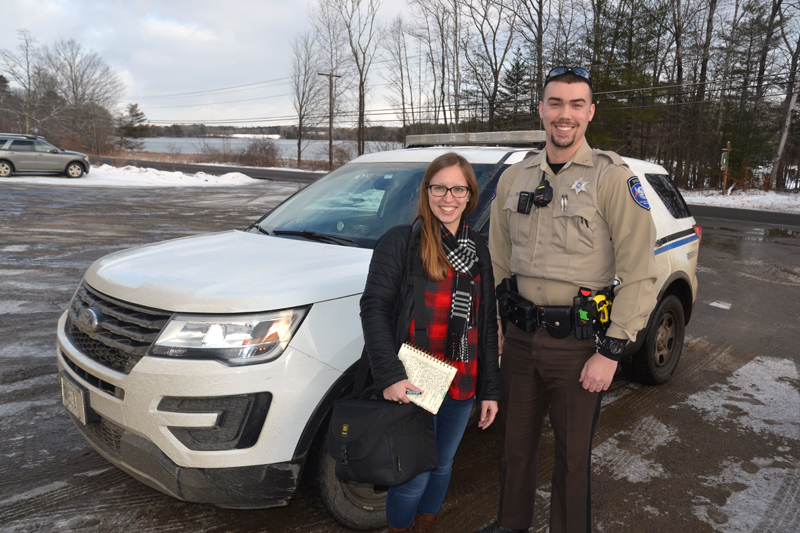 “You never know what you’re going to get into. It’s all about safety. That’s why we do trainings of scenarios,” he said. “Domestics are one of the most dangerous calls we go to.”

Day said that when he first started the job, serious situations such as notifying a family about the death of a loved one were “eye-opening.”

“Those situations have been horrible to deal with, but someone has to do it, and that’s the job I’ve chosen,” he said.

He said deputies have someone they can talk to if necessary.

“It’s good to keep everyone mentally healthy,” he said.

Day said one fun thing deputies do is “Dining with a Deputy.” Each week, deputies on the day shift eat lunch at a local school.

“The kids seem to like it,” Day said. Deputies try to be out in public, so people can get to know them.

He said much of the job is having compassion and just talking to people, and that living in the community means people tend to trust you.

“You get a rapport with people,” he said.

Day said one challenge the Lincoln County Sheriff’s Office faces, along with other Maine agencies, is having islands in its jurisdiction.

He said if there is an emergency on Monhegan Island, sheriff’s deputies would take a boat from the U.S. Coast Guard station in Boothbay Harbor.

“That definitely brings a challenge,” he said.

Each deputy has a laptop in his or her vehicle so they can write reports, look up licenses, and see other deputies’ locations. Day said he enjoys having a “rolling office” because he can be on the move whenever he needs to.

For example, while on the ride-along with Day, we responded to a car crash in Edgecomb involving five vehicles, with no injuries.

Day said that in recent years there have been less people interested in becoming police officers, likely due to controversial cases involving police in other parts of the country. He hopes that changes in the future.

“They do it because they enjoy it, they want to help people,” he said of police. “I enjoy my job. I don’t know what else I’d honestly be doing.”

“We’re problem solvers … It feels good when we can make a situation better than it was,” Day said. “We do our best.”