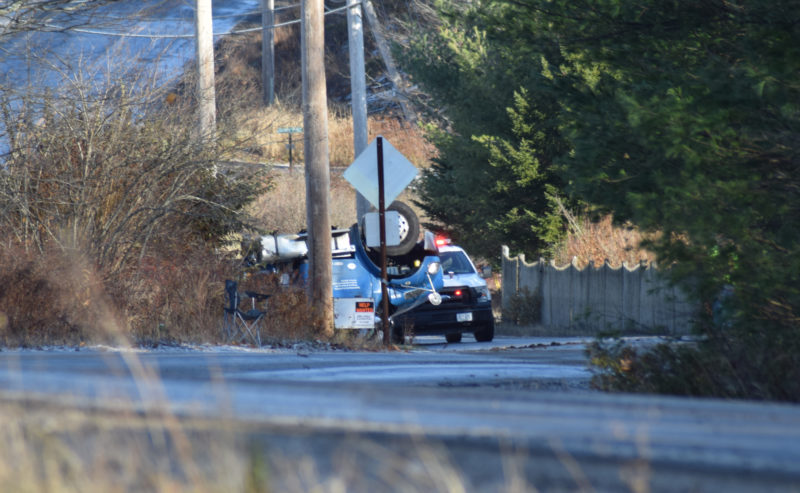 A propane truck is overturned on Pond Road in Newcastle on Friday, Nov. 15. The crash and a subsequent leak closed the road for more than six hours. (Evan Houk photo)

A propane truck crash and subsequent leak closed Pond Road, a section of Route 215, in Newcastle for more than six hours and forced the evacuation of two nearby homes Friday, Nov. 15.

Daryl P. Leeman, 48, of Jefferson, was driving the Dead River Co. truck north on Pond Road, rounding a curve, when, due to black ice “and the road being unsanded,” he lost traction, according to the Lincoln County Sheriff’s Office. The 2016 Freightliner crossed the centerline before going off the left side of the road and into a ditch, where it rolled over and came to rest upside down.

The crash occurred between West Hamlet Road and McNeil Point Road at about 9:30 a.m. About an hour later, officials declared the site a hazmat area because propane was leaking from the truck, according to Huntley.

Officials evacuated two nearby homes. The residents stayed in another home in the middle of a field about 300 yards from the scene, close to Lincoln Cemetery, Huntley said.

“It was a very neighborly thing,” Huntley said of the homeowners’ willingness to shelter their neighbors during the cleanup.

A factor in the length of the road closure was the need to shut off some of the power lines in the area to prevent ignition of the leaking propane, according to Huntley.

Another factor was the need to move the truck carefully to avoid releasing even more propane, he said. Blagden’s Garage, of Wiscasset, responded to remove the truck in what a post on the Newcastle Fire Co. Facebook page described as a “controlled uprighting.”

Lincoln County Communications dispatched the Newcastle Fire Department for the initial report of the crash, then sent the Bristol, Damariscotta, and Nobleboro fire departments to the crash site with tanker trucks just before 12:45 p.m.

The tankers from other towns were dispatched as a precautionary measure, in case the propane ignited, after an initial attempt to upright the truck caused it to leak more propane, according to Huntley.

He said the departments used about 40,000 gallons of water to wash away the propane vapor and fumes. This is in contrast to the 50,000-60,000 gallons used in a typical house fire, he said. 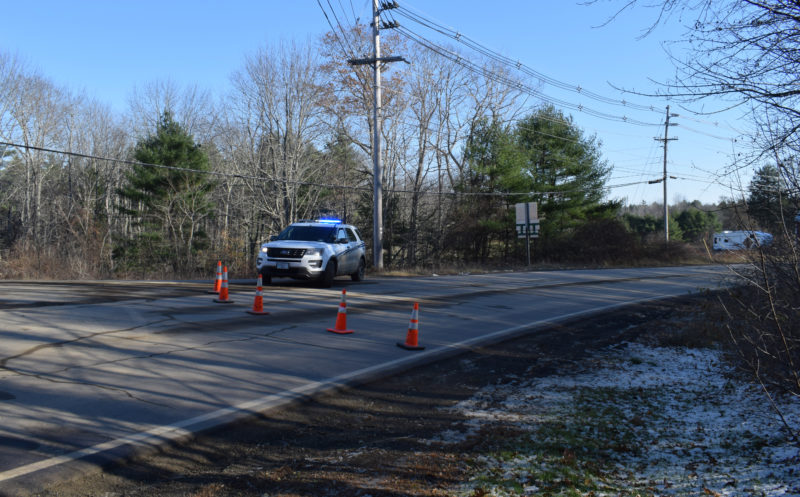 Huntley said liquid propane quickly turns into vapor once it is no longer pressurized in a truck’s tank. He said the propane vapors tend to collect in low areas and can become a fire hazard if they are not dispersed.

The only follow-up cleanup necessary is drainage work around the ditch the truck rolled into, Huntley said.

Another Dead River truck then unloaded the approximately 2,000 gallons of remaining propane from the damaged truck.