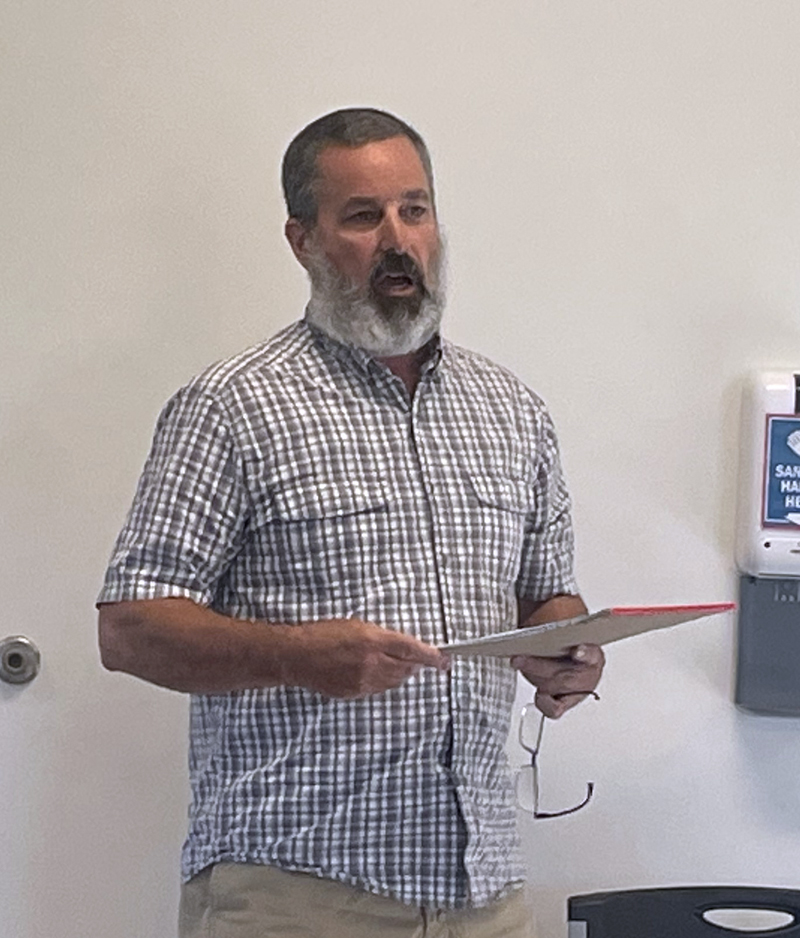 Matt Gomes urges the Whitefield Planning Board to specify the letter of the law while finalizing the language on a draft amendment to the towns building and development ordinance. Gomes was one of six residents to attend a public hearing on the draft amendment Wednesday, Aug. 3. (Sherwood Olin photo)

A consensus emerged as the Whitefield Planning Board took input on a draft amendment to the town’s building and development ordinance regulating commercial solar development.

“Nobody is here to brighten our future and make us look fabulous to future residents when they come back to look at it,” said resident Kathleen Goetzman. “They’re here to make money. That’s the bottom line.”

Goetzman said she was opposed to any sort of solar development, citing the potential damage to Whitefield’s rural character, and the loss of valuable farmland. She said her opposition boils down to property values and aesthetics. “I can’t think of anything uglier we could possibly do to this town,” she said.

After it was suggested the board adding language requiring applicants to actually live in Whitefield, multiple board members answered residency requirements in Maine’s marijuana statutes are currently being challenged in court.

Planning board member Dan Brown spoke eloquently regarding respecting private property rights. Property owners, regardless of their place of residency, pay taxes to the town and are entitled to the same rights and services as any other taxpayer, Brown said.

He personally was not comfortable presenting one set of rules to one taxpayer and another set for another, Brown said.

He also expressed the point that regulations by definition limits individual freedoms, but restriction is not the ultimate goal. “Just as a Whitefield citizen, I think that any of these ordinances, including this one, is really not to prevent people from doing things,” Brown said. “I don’t think of it that way at all, because it’s a free country. If you own your property, there are certain things you should be able to do, but what it all boils down to is how it affects your neighbors. How what you do affects others in the community.”

Praising the work the board has done to date, resident Matt Gomes recommended the board add language specifying standards and clarifying definitions. Drawing on what he said was a 28-year career in state law enforcement, Gomes said specifying the letter of the law now will help protect the town later.

“I had some questions so I wanted to come tonight, strictly in the interest of protecting the town of Whitefield, aka the citizens of Whitefield, and maybe getting some additional language, kind of fine tuning some language in there, just to make it a little more bullet proof,” he said.

As proposed, the draft ordinance would require the applicant to submit a certified cost estimate for decommissioning and site restoration and post a performance guarantee equal to 150% of that figure to cover those future expenses. The developer is required to update this estimate every five years and adjust their guarantee amount to maintain the 150% level accordingly.

Gomes agreed it was good to put that responsibility on the developer but pointed out there is no language in the draft outlining a specific process for ensuring the updates are done in a timely manner. What happens when years go by and nothing has been done. “Where is the alarm that goes off,” he said.

Gomes also recommended the board add specific language requiring decommissioned solar panels are to be disposed of in safe and appropriate manner, “pursuant to compliance with all state, federal, and local law in effect at the time of decommissioning.”

“Solar is a clean power source,” Gomes said. “When that panel is out of the ground and attracting sunlight, it’s not burning fuel. It’s clean. However the birth of a solar and death of solar panel: not so much.”

The planning board will continues working on the ordinance language draft with a work session scheduled for Wednesday, Aug. 10, at the town’s central fire station. The board’s stated goal is to finalize the draft amendment language by the end of August and conclude their work in time to complete the town warrant before absentee ballots are printed for the November election.

Whitefield voters unanimously adopted a 180-day moratorium on commercial solar developments on June 27, in part to allow the planning board time to develop ordinance specific to solar installations.

The moratorium follows the planning board’s approval of a commercial development application for a 990-kilowatt, ground-mounted solar array on a seven acre site on North Howe Road in May.