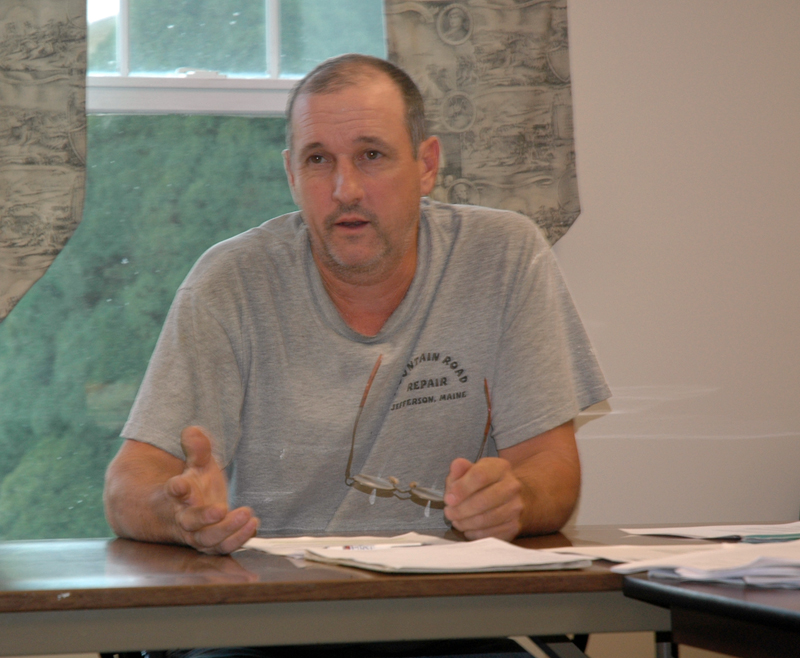 Jefferson residents weighed in on a proposal to indefinitely prohibit recreational marijuana-related businesses during a public hearing Monday, Sept. 25.

Voters will decide whether to enact the ban in a referendum vote Nov. 7.

The ordinance under consideration would not impact medical marijuana, but would prohibit recreational marijuana-related businesses, such as retail shops, social clubs, and cultivation, manufacturing, and testing facilities.

Don Means, of Bristol, and Lincoln County Sheriff’s Office Lt. Brendan Kane moderated the hearing at the invitation of the Jefferson Board of Selectmen.

Selectman Gregory Johnston said the board decided to proceed with an ordinance in an effort to have something on the books while the Legislature wrangles with the regulatory framework for recreational marijuana sales and licensing.

“When the state finalizes what it’s doing, we can change the ordinance based on what the town wants to do,” Johnston said.

Maine legalized recreational marijuana in a statewide referendum in November 2016, but Jefferson voters opposed the referendum 927-670.

At the hearing, a few members of the public voiced support for the prohibition and aired concerns about marijuana’s impact on the community and its youth.

However, Michael Howland, a resident and medical marijuana caregiver, urged the board to strike the portions of the ordinance pertaining to cultivation.

Howland said the ban runs contrary to Jefferson’s agrarian heritage and could block economic opportunities that could generate tax revenue for the town.

“It it was approached responsibly, there could be opportunities for the town,” Howland said.

“This is a step in the right direction, to regulate it and manage it,” Howland said.

Howland said commercial growers would have to follow state criteria, including security measures.

“It’s not going to be seen, not going to be in the public eye. Caregiver storefronts and social clubs, no, I don’t think they belong in Jefferson, but for a rural and agricultural town, cultivation could be an opportunity,” Howland said.

Howland said that if the ordinance passes, it would not be easy to reverse. He recommended that the town pursue a moratorium, a type of temporary ban, instead.

Johnston said the board elected to pursue an ordinance in lieu of a moratorium because moratoriums last 180 days with an optional 180-day extension.

“Nothing is set in stone. We can add amendments in the future,” Johnston said.

Additionally, Johnston said the board wants to have something in place before the state finishes its process to ensure the town is not stuck with something the voters oppose.

“An ordinance is basically the law of Jefferson. A moratorium puts a freeze on it,” Johnston said.

Program Manager Kate Marone, of the Damariscotta-based nonprofit Healthy Lincoln County, said a main goal of her organization is to prevent and reduce youth drug use.

“I’m glad to hear you are looking into this to figure out what works for Jefferson,” Marone said.

In response to questions from the public regarding how law enforcement determines if a driver is under the influence of marijuana, Kane explained the process deputies go through to determine impairment.

“We make assessments, just as we all do in everyday life. If we feel they are impaired, we put them through a series of field sobriety tests. What we are looking for is impairment, not whether it is drugs or alcohol,” Kane said.

Kane said there is no blood or breath test in place for marijuana as there is for alcohol.

“There is not that hard number yet for marijuana,” Kane said.

On Tuesday, Sept. 26, the Maine State Legislature’s Joint Select Committee on Marijuana Legalization held a public hearing on a bill that would double the recreational marijuana sales tax to 20 percent and allow for drive-thru retail marijuana establishments and home delivery of marijuana, according to the Bangor Daily News.