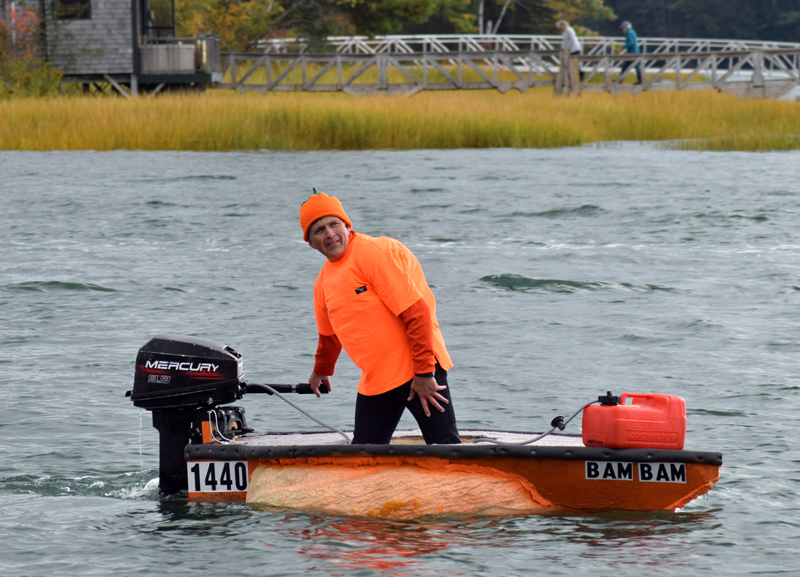 There were clear skies, anticipation, wet clothes, and a floating treasure chest at this year’s Damariscotta Pumpkinfest Regatta, held in Damariscotta Harbor on Monday, Oct. 14.

Hundreds of spectators packed the rocks along the waterfront, as well as the seats of the Lincoln Theater, to get a glimpse of the pumpkin-boat racing spectacle.

Buzz Pinkham, co-founder of Pumpkinfest with Bill Clark, took home his first championship in the motorized division of the races this year.

Pinkham lapped two other regatta veterans, defending champion Russell Orms, who was dressed as a Viking; and Tom Lishness, dressed as a gnome.

“It’s a milestone,” Pinkham said of his first win in the regatta he helped inspire.

Lishness attempted to distract Orms in the race for second place, after Pinkham lapped the two of them, by throwing his “treasure chest” into the water.

After several attempts to fish the chest out of the water, Orms finally retrieved it, spilling gold, spaghetti-like strands from the box and raising his arms in victory, although he ended up coming in last place.

In the first race of the day, the newscasters’ challenge paddle race, Ryan Breton, of the Channel 6 team, had a false start that nearly sank his pumpkin.

Before the crowd had a chance to chant the traditional starting call of “Ready, set, get wet!” Breton was already soaked.

Larry Sidelinger, announcer for the regatta along with Don Carrigan, of News Center Maine, wanted the crowd to practice the starting call before beginning the race.

“Now remember folks, the call is ‘On your mark, get set, get wet,” Sidelinger said.

Breton apparently mistook this for the official starting call and began paddling. As he tried to reverse course, the back of the pumpkin boat dipped into the water, filling the hollowed-out pumpkin with water as Breton tried to tread water with his paddle until he was pulled safely out of the boat.

“We got sinkage … he’s struggling, someone save him!” Sidelinger yelled as the crowd gasped.

While waiting for volunteers to bail out Breton’s boat and make it race-ready again, Sidelinger encouraged the crowd on the rocks to participate in “the wave.”

After some prodding, the crowd got into the spirit and began to stand up and raise their arms in succession, creating the human ripple effect.

After the racers officially got started, Breton and his partner from Channel 6, Jessica Conley, came in second place.

The winner of the newscasters’ challenge was the Channel 8 team of Jacqueline Thomas and Maria Manning.

The Channel 13 team of Lauren Healy and Matt Peters rounded out the group, taking third place.

Peters, a Pumpkinfest enthusiast from Colorado who was dressed as Batman, volunteered to team up with Healy for the newscaster relay race.

Jaja Martin, who has competed in previous Pumpkinfest regattas, swept the other paddle race categories, taking first place in the individual finals and, with partner Julia Watts, the team finals.

Martin, who has sailed around the world, showed off her advanced boating skills at the event, paddling furiously to victory, well ahead of the other competitors.

Krull was the winner of a new raffle for a chance to race in a pumpkin boat.

The proceeds from the raffle will be donated to the Farmington Fire Benevolent Association. A propane explosion in Farmington took one firefighter’s life and injured eight others this September.

Krull raced in a Farmington Fire Department tribute boat decorated with fire hoses. He said his mother won the raffle but couldn’t race, so he took her place.

The day started with a blessing of the pumpkin boat fleet by the Rev. Bobby Ives and a performance of the national anthem by the Lincoln Academy Lincolnaires.