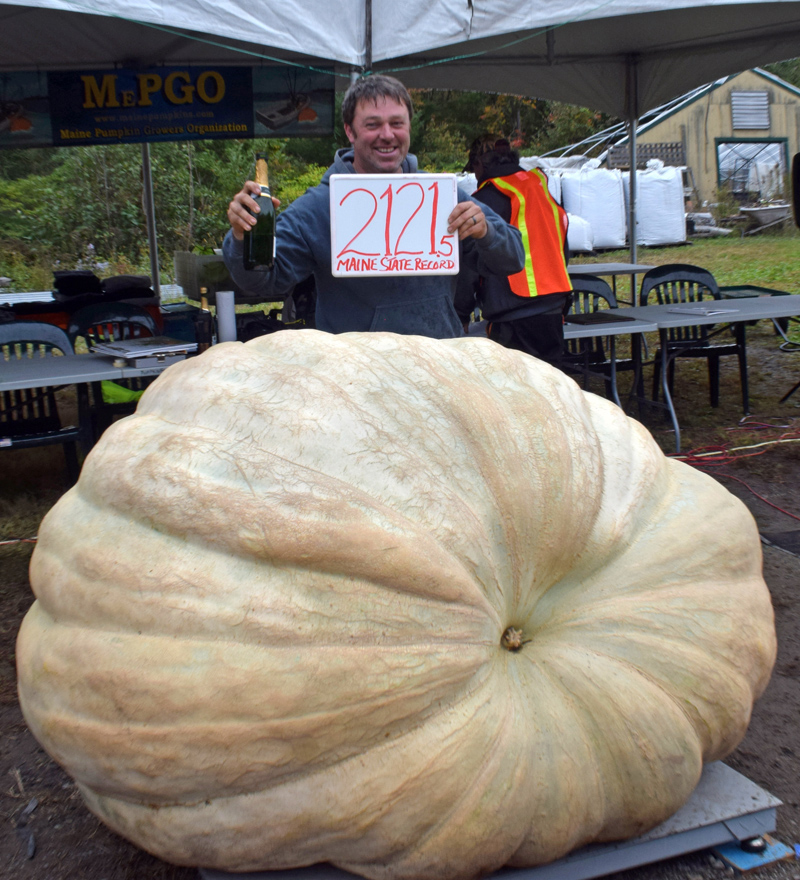 Edwin Pierpont, of Jefferson, poses with his state record giant pumpkin that took first place in the adult giant pumpkin category at the 2021 Damariscotta Pumpkinfest weigh-off at Pinkhams Plantation on Oct. 3. The pumpkin is the first one-ton pumpkin to be grown or weighed in the state of Maine. (Evan Houk photo)

The 2021 Damariscotta Pumpkinfest got off to a smashing start when Edwin Pierpont, of Jefferson, beat his own state records for heaviest giant pumpkin and giant green squash at the festival’s weigh-off on Sunday, Oct. 3.

The white oblong fruit is the first one-ton pumpkin ever weighed or grown in Maine, clocking in at 2,121.5 pounds and besting Pierpont’s previous state record that was slightly less than 2,000 pounds, set three days earlier at the Deerfield Fair in New Hampshire.

Because the pumpkin was grown in Maine, it set the state record even though it was not weighed in Maine. Pierpont previously held the state record for giant pumpkin with his winning entry in the 2019 Damariscotta Pumpkinfest that weighed 1,832.5 pounds.

The weigh-off, the first major event of Pumpkinfest, drew about 60 spectators to Pinkham’s Plantation, on Biscay Road in Damariscotta, on a rainy fall morning.

The event lasted for over three hours as each pumpkin and squash had to be moved around the property with heavy equipment donated by W.D. Matthews Machinery, of Auburn, and Hancock Lumber, of Damariscotta.

The largest fruits had to be rigged using straps attached to a forklift with volunteer pumpkin wranglers guiding them onto the scales for the official weigh-off.

The straps groaned as the winning one-ton fruit was lifted onto the scale, heading into what master of ceremonies WGME Chief Meteorologist Charlie Lopresti called “uncharted territory” for Pumpkinfest.

Lopresti said that when the pumpkins were that small, all the volunteers needed were lifting tarps to drag the fruits onto the scales, as well as some ibuprofen at the end of the day for their sore backs.

Pumpkinfest co-founder Bill Clark built the anticipation for the final weigh-off by covering the readouts as the two largest pumpkins sat on their scales at the end of the event.

Scott St. Laurent, of Lyman, had the heaviest pumpkin ever weighed in Maine for a few minutes as his pumpkin was weighed first and came in very heavy at 1,959 pounds.

As each pumpkin was rigged, Lopresti would ask each of the growers what their estimate of the pumpkin’s weight would be. The measurements of a giant pumpkin can be used on a chart provided by the Great Pumpkin Commonwealth to determine an estimate of its weight.

St. Laurent said he only hoped that his pumpkin would break 1,500 pounds. He said his pumpkin saw a growth rate of over 50 pounds per day during the peak of its growing.

Once the one-ton pumpkin’s weight was revealed, Clark sprayed Pierpont with champagne before gifting him with the bottle and the celebration commenced.

Lopresti paid special tribute to Al Berard, of Sanford, who died in October 2020 and whom he referred to as the “godfather” of Maine giant pumpkin growing.

One of Berard’s seeds, a 903 Berard, spawned a giant pumpkin for first-time grower Rhonda Denny, of Poland, that weighed 538 pounds and won the Howard Dill Award for prettiest pumpkin over 500 pounds.

Seeds are saved whenever a particularly large pumpkin or squash is produced and are usually named using the weight of the fruit and the grower’s name.

Lopresti, a perennial contender, and his wife Morningstar, of Buxton, placed fifth in the adult giant pumpkin category at 1,465.5 pounds.

The crowd groaned, cheered, and laughed in unison as the weight came in only one pound lighter than 1,000.

A state record was also set for a long gourd grown by Elroy Morgan, of Charleston, that measured 142.25 inches.

Charlie Lopresti said a long gourd is a gourd that is pollinated at night, usually by a moth in nature.

Morgan said he pollinated his gourd by hand. “Some people think it’s a giant green bean,” he said.

Prizes and cash awards were distributed by Clark at the end of the event.

“We all have to do something wacky every once in awhile and that’s what giant pumpkin growing is all about,” Charlie Lopresti said.

Damariscotta Pumpkinfest will continue when the giant pumpkins are deployed in front of businesses on Main Street in Damariscotta and Newcastle on Thursday, Oct. 7 for artists to decorate.

Because of COVID-19 concerns, the other usual Pumpkinfest events, such as the regatta, parade, and pumpkin drop, are canceled for this year.

The giant fruit will be displayed through Tuesday, Oct. 19.

For the full results of the weigh-off, visit the Damariscotta Pumpkinfest’s Facebook page.

(Correction: An earlier version of the article “Pumpkinfest weighs off with Maine’s first one-ton pumpkin” online and on the front page of the Oct. 7 print edition incorrectly reported that Scott St. Laurent held the Maine state record for giant pumpkin for a few minutes. St. Laurent’s giant pumpkin briefly was the heaviest pumpkin weighed in Maine before Edwin Pierpont’s prize-winning pumpkin was weighed. Pierpont’s entry in the 2021 Deerfield Fair in New Hampshire was the state record holding pumpkin at that time. The Lincoln County News regrets the error.)