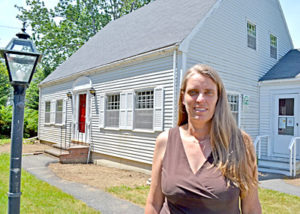 Hicks’ hiring follows the departure of Donna Minnis, who resigned in late 2015 after almost nine years as executive director. Minnis now works at the Maine Audubon Society as a grants manager in the development office.

Hicks said she was drawn to the position due to the professional and personal growth it would provide. Hicks has 20 years of experience working with nonprofit environmental organizations, 12 of which were spent at Positive Force Consulting, a business she started in Maryland in 2004.

“Consulting gave me a lot of flexibility,” Hicks said. “I had just had my first child and four years later had my second one, so this allowed me to be home with them and do the work I was interested in.”

In 2010, Hicks began Sustainable Delmarva, an initiative for communities in Delaware, Maryland, and Virginia which facilitated community conversations to develop plans about the future of the rural region between the Chesapeake Bay and the Delaware Bay.

Hicks said she hopes to take her 20 years of experience with various organizations and boards and apply it to PWA.

“The advantage of consulting is you get exposed to so many different people, get to be a part of a broad array of work, but you don’t get to see the impacts,” Hicks said. “By working with this organization with a long history and a lot of community goodwill, it gives me a chance to see the impacts and strengthen my skill set.”

Hicks was also excited for the chance to move to Maine. Although she was born in Connecticut and lived most of her life in New Jersey, most of her family is from Maine, and she spent many summers in Rockport.

“It’s always been a goal of mine to establish myself up here,” Hicks said. “I have a deep connection and feel very much at home here.”

After two rounds of interviews, PWA offered Hicks the job in mid-February. Hicks had hoped to find a position that would be available after the school year ended for her children.

“Carolyn Shubert and Jody Harris picked up a huge load of work from this unusual arrangement,” Hicks said. “If it weren’t for (interim Executive Director) Mike (Kane), the staff, and the board being willing to delay my start date, it wouldn’t have been possible. I was impressed with their willingness to accommodate and work with me.”

Since starting as executive director on June 21, Hicks has been assisting with PWA’s move from downtown Damariscotta to its new headquarters at 584 Main St. The two-story home on almost 2 acres of land presents PWA with the opportunity to engage more with the community, Hicks said.

This year marks PWA’s 50th anniversary. Hicks said she hopes to see the organization continue its mission, including the goal of strategic land preservation, and expand its ability to serve and be more visible in the community.

“Because we’re in a new era with the bigger facility and a new executive director, this will be a year we can try new things, but also be willing to self-reflect and make sure we’re doing it with PWA’s mission in mind,” Hicks said.

Hicks grew up in Cherry Hill, N.J. She holds a Bachelor of Science degree in education from Shippensburg University of Pennsylvania and a Master of Science degree from Antioch University New England Graduate School in environmental studies with a focus on organizational and community sustainability.

She is married to Tom Briggs. The couple has two sons, Tyler and Wyatt.