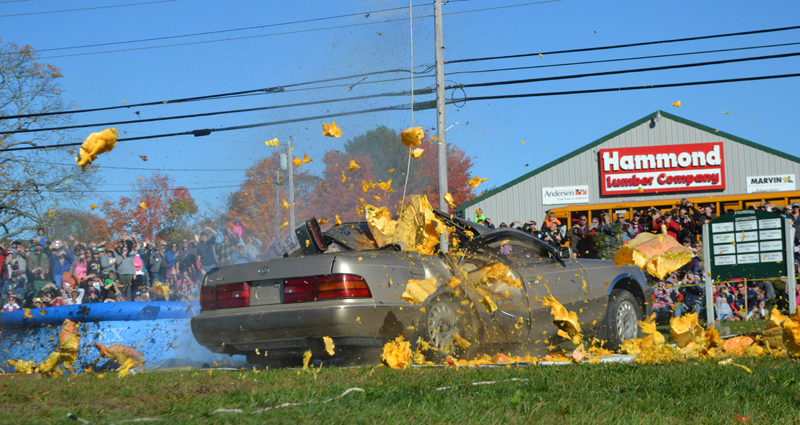 After a 145-foot drop, a pumpkin smashes into a Lexus during the final event of the 2016 Damariscotta Pumpkinfest on Monday, Oct. 10. (Maia Zewert photo)

Despite a rain-plagued day for the Regatta, the 2016 Damariscotta Pumpkinfest and Regatta was a success, according to the event’s co-founder, Buzz Pinkham.

“Everyone has a smile on their face,” Pinkham said. “You see it just walking down Main Street. That excitement is just priceless.”

This year’s celebration marked the 10-year anniversary of the Pumpkinfest, an event that draws thousands of people to the Twin Villages on Columbus Day weekend to see giant pumpkins transformed into works of art or boats, or dropped onto cars or into pools.

“Folks ask me if we thought it would get bigger,” Pinkham said. “We don’t try and make it bigger, but better.”

Pumpkinfest officially kicked off the weekend of Oct. 1-2 with the giant pumpkin weigh-offs for both volunteer and professional growers, but for those tending to the fruit and the numerous volunteers for the event, Pumpkinfest began long ago.

On Thursday, Oct. 6, crews deployed the giant pumpkins throughout Newcastle and Damariscotta to be carved or painted by artists. The pumpkins will remain on display for the upcoming weeks.

Crowds lined the streets on Saturday, Oct. 7 for the Giant Pumpkin Parade, which featured musical performances, dancers, and floats from local businesses.

Volunteers also closed a block of Water Street and transformed it into a kids zone complete with a bounce house and activities for all ages.

New for this year was the pumpkin slingshot and catapult, which was held at Round Top Farm. For $5, individuals could purchase a basket of six pumpkins to shoot at wooden targets.

“Those were a big hit,” Pinkham said. “I think they’ll be back next year.”

The festivities continued Sunday, Oct. 8 with the pumpkin derby, now in its fourth year.

Due to the downpour, the kids zone was closed on Sunday for the first time in the event’s history, Pinkham said.

The rain didn’t stop a large crowd from turning out for the Regatta, held in Damariscotta Harbor on Sunday afternoon.

“Surprisngly, the amount of people at the Regatta compared well to last year,” Pinkham said.

Those who wished not to face the rain were able to watch the event live in Lincoln Theater.

Pumpkinfest concluded Monday, Oct. 10 with the pumpkin drop at Round Top Farm. In front of a crowd of thousands, a crane was used to drop giant pumpkins from a height of approximately 145 feet onto a car and into two swimming pools.

Bill Clark, another Pumpkinfest co-founder, said he is incredibly proud of the number of volunteers who come together each year to make Pumpkinfest a reality.

“We have businesses all over the area who sponsor this. There are people who spend countless hours and give up their vacation time to work on this,” Clark said. “I can’t even count the number of people that come out of the woodwork to make this happen.”

The response to the annual celebration has always been very positive, Clark said.

“I hear it’s a great festival, but I’ve never gotten to see it,” he said.