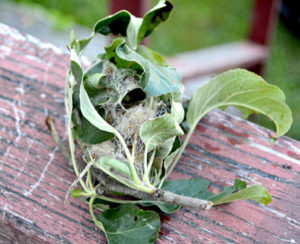 Browntail moth caterpillars make their silky, white webs in early fall. They lie dormant in the web until early June, when they emerge to feed. The webs are usually formed around one leaf and should be removed immediately with extreme caution. (Haley Bascom photo)

An invasive moth is on the rise throughout parts of Maine, including Lincoln County, according to local scientists and doctors.

The browntail moth, recognized by its white wings and golden body, is relatively harmless in its adult stage. Yet in its caterpillar (larval) stage, the browntail moth’s hairs are both toxic and easily transferable. The hairs cause a rash similar to poison ivy and become especially dangerous when inhaled.

Chuck Jewitt, of Nobleboro, first encountered browntail moth caterpillars last August when he noticed seemingly random breakouts of a rash every time he worked outside in his shed.

Though his doctor said the rash was from poison ivy, he was skeptical. 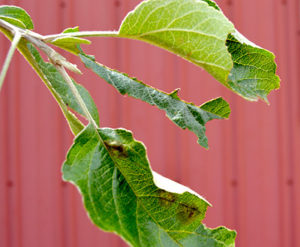 Noticeable defoliation of oak and apple trees is one sign of a possible browntail moth infestation. Though small in size, the caterpillars can cause severe damage to trees during their feeding from early June to when they cocoon in late June. (Haley Bascom photo)

“I know what that looks like,” said Jewitt, noting he didn’t see any around the area he was in.

When Jewitt finally got the correct diagnosis, he went home to investigate. Sure enough, he had a small infestation of browntail moth webs.

Even when dormant in their colonies of white silk webs in the early fall through spring, the browntail moth’s toxic hairs can linger in the air and surrounding area.

This June, Jewitt noticed the familiar rash appearing on his forearms and neck. He said he went to a doctor at LincolnHealth who immediately knew what it was.

“He said he had given treatment to about three people before me earlier that day,” said Jewitt.

Jewitt said he wants to get the word out about the moths so people can take the necessary precautions.

This is precisely what Forest Entomologist Charlene Donahue has been trying to do as well.

The browntail moth has been prevalent in areas of Maine since the early 1990s, with its first appearance noted in 1913. Originally from Europe, the browntail moth spread to Massachusetts in the late 19th century and slowly made its way up north.

Though always present, the outbreak last year was noticeably worse.

“What keeps them under control most of the time hasn’t been well-studied,” said Donahue.

She said that lack of knowledge of the browntail moth simply came down to priority.

“It was a really a small problem in a big world,” she said.

Now researchers throughout Maine are trying to gain an understanding of what attracts the moths to certain areas of Maine and why they have grown out of control the last couple years.

One theory as to what kept them under control involves a fungus that may have killed the browntail moth. Dr. Ellie Groden from the University of Maine is studying the fungus this summer and its possible links to the moth.

The fungus, Entomophaga aulicae, seems to only target browntail moths.

“It seems to be species-specific,” said Donahue, saying it hasn’t been shown to harm other types of caterpillars. “It’s like how our colds can’t spread to our dogs.”

The caterpillars are most easily recognized by their brown, hairy body and two red dots that appear toward the tip of their head.

In the caterpillar stage, the browntail moth will feed on leaves, mostly oak and apple, defoliating the trees. While only 2 millimeters in size in the fall, the caterpillars did more than 10,000 acres of damage last year.

Donahue surveyed forests in the area again this year and should have the results soon. She viewed the scope of damage from a plane at 1,500 feet to judge how much defoliation could be observed in the trees below.

Donahue said that trees need at least 50 percent defoliation to observe their damage from the air. The fact that so much damage was caused last year showed a great population increase in 2015. As a result, she said she knew this year was going to be a lot worse.

However, there are things people can do to protect themselves from the browntail moth.

The browntail moth is in its caterpillar stage for nine months, from August to June, and is dormant during the winter. That means the risks for rash and irritation are most prevalent in early fall and late spring. During this time, the Maine Department of Agriculture, Conservation, and Forestry recommends extreme caution when working around red oak and apple trees.

Cocoons and winter webs should be removed immediately upon sighting. They should be dampened with water before removal to prevent the hairs from spreading. Once removed, they can be submerged in soapy water or burned.

The Maine Department of Agriculture, Conservation, and Forestry also notes that it’s important to remember the toxic hairs can linger for up to two years after the infestation is removed. The light hairs are easily airborne and can spread quickly to surrounding areas. That’s why it’s ideal to remove them during the winter months before the caterpillars grow their most toxic hairs in the spring.

Donahue also recommends checking produce and surrounding areas for infestation. She said she has received many calls asking if the hairs could transfer to gardens. While some foods that can be easily scrubbed could be okay, she said she does not advise eating any exposed produce that is harder to wash, such as leafy greens.

For more information about the browntail moth and how to remove an infestation, go to http://goo.gl/TV1f0L.