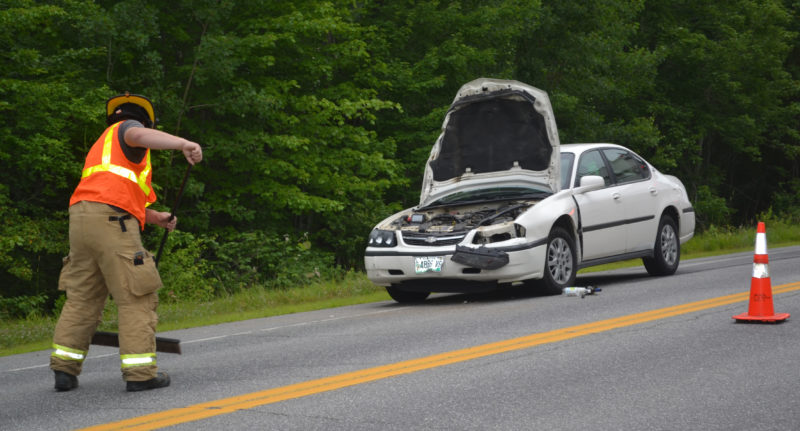 A Bristol Fire & Rescue firefighter clears the road of debris after a rear-end collision on Route 130 in Bristol the morning of Saturday, July 15. (Abigail Adams photo)

A rear-end collision on Route 130 in Bristol the morning of Saturday, July 15 sent the drivers of both vehicles to the hospital with minor injuries.

Brittany Lange, 18, of Bristol, was driving a Chevrolet Impala north on Route 130 behind Raby’s vehicle. Lange did not stop, and struck the rear of Raby’s vehicle, Chubbuck said.

Raby and Lange both complained of neck pain and were transported to LincolnHealth’s Miles Campus, he said. Lange was the sole occupant of the Impala, which sustained front-end damage and was towed from the scene.

The passenger in Raby’s vehicle, which had minor rear-end damage, was uninjured.

The accident was reported at about 11:17 a.m. Traffic was reduced to one lane as emergency responders worked at the scene.

Bristol Fire & Rescue, the Central Lincoln County Ambulance Service, and the Lincoln County Sheriff’s Office responded to the scene, which was cleared in about an hour.