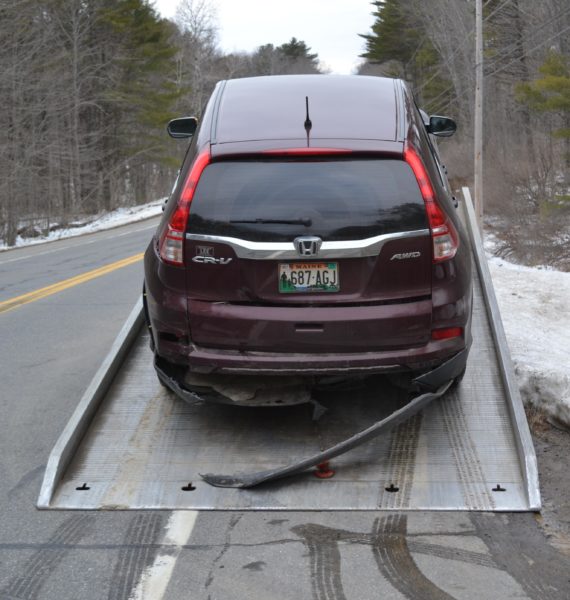 A Honda CR-V is towed from the scene of a rear-end collision on Route 27 in Wiscasset the early evening of Tuesday, March 21. (Abigail Adams photo)

A rear-end accident on Route 27 in Wiscasset sent the drivers of both vehicles to area hospitals the evening of Tuesday, March 21.

Deborah Taylor, 45, of Wiscasset, was driving a 2015 Honda CR-V north on Route 27 in the vicinity of Blagden’s Garage when she slowed to turn into a driveway, Wiscasset Police Sgt. Alfred Simmons said.

Jennifer K. D’Alessandro, of Boothbay Harbor, was driving north in a 2006 Hyundai Elantra, Simmons said. D’Alessandro failed to see Taylor slow to make a turn and ran into the back of Taylor’s vehicle.

The accident occurred shortly before 5:15 p.m. The drivers were the sole occupants of their vehicles, Simmons said.

The Wiscasset Ambulance Service, Wiscasset Fire Department, and Wiscasset Police Department responded to the scene, which was cleared in about 30 minutes.