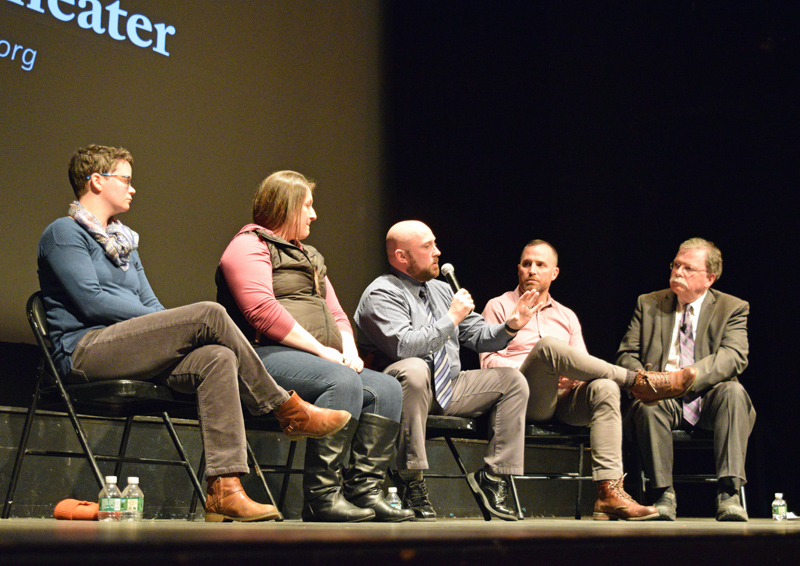 A panel of local experts on the opioid crisis talked about how the community can help, the stigma around medication-assisted treatment, and local options for treatment Tuesday, Jan. 29.

The panel discussion at Lincoln Theater in Damariscotta followed a screening of the documentary “Recovery Boys.”

The event was part of Recovery in Maine, a program that pairs free screenings of documentary films with community discussions about the crisis to raise awareness and find solutions.

Points North Institute organizes the events, while MaineHealth sponsors them.

“It has ravaged our state,” Harris said.

The film opens at Jacob’s Ladder, a rehab facility on a farm in West Virginia, and shows the individual obstacles each man faces in his recovery after “graduating” from rehab. Some men heal broken relationships, others deal with relapses.

The documentary was directed by Elaine McMillion Sheldon, who won the News and Documentary Emmy Award for Outstanding Short Documentary for her 2017 film “Heroin(e).”

After viewing the film, the panel of experts fielded questions from a moderator and the audience.

Welch began the discussion, talking about her addiction and her three years of sobriety. She was lucky because she had a support system to help her, she said.

“Recovery is not cookie-cutter,” Welch said. “What works for one person might not work for another person.”

The film highlighted a part of recovery the region is missing – recovery houses, where people in recovery can stay before living on their own, she said. Similar “gap housing” is featured in “Recovery Boys.”

Harris, of MaineHealth, said she does not know where the closest such house to Lincoln County is.

Warlick agreed that a kind of gap housing would help.

“We’re a town of 2,200 people,” he said of Damariscotta. “So if you’re dealing with drug addiction in a small town like this, what do you do? Do you move away? Moving away may not be the issue, because you don’t have a job and you’re a felon. There’s this incredible vicious circle.”

Relating the discussion back to the documentary, an audience member asked how the community could help solve the opioid crisis in Maine.

Warlick said people in the community should remember not to give up on people with addiction.

Other ways the community can help include “creating safe places”; contributing to charities that help people with addiction; and, for businesses, employing people in recovery, Cavanaugh said.

Welch said willingness to talk openly with a person with addiction is crucial, as are community programs like Recovery in Maine.

The conversation repeatedly returned to the community stigma toward using medication to help with addiction.

Cavanaugh, as a physician, said she worked toward the required waiver that allows her to prescribe medication for people with substance abuse disorder. One of the medications she can prescribe is Suboxone.

“The medication serves to treat the addiction,” Cavanaugh said. “I know in the community a lot of people would say, ‘Well, it’s replacing one drug with another,’ but it’s really replacing an addiction with a medication. I think that’s the way to look at it.”

She is one of the integrated medication-assisted treatment providers at LincolnHealth, which means she follows a model of using medications, in addition to counseling, to treat a person with addiction.

As chief of police, Warlick has heard resistance to medication-assisted treatment in the community. However, he views the combination of Suboxone with “good therapy and somebody who wants (sobriety)” as the optimal way to treat addiction.

He said the medication works, “provided it is used appropriately.”

Welch recalled that during her early recovery, she did not believe Suboxone was the solution to her addiction. After hearing stories about Suboxone, she changed her mind.

“If you don’t have the resources or money to go directly to a detox or rehab, that can be a matter of life and death. Having that Suboxone on board can be a first step until you are able to work on treatment and yourself,” Welch said.

The LincolnHealth emergency department recently changed its protocol for treatment of people with addiction, Fox said.

LincolnHealth followed the lead of Mid Coast Hospital in Brunswick by allowing patients to start Suboxone or a form of therapy in the emergency department.

“Now what we do is, if we identify someone who is at risk, with either a substance abuse-related problem or someone they suspect … has a disorder, we can offer them this treatment,” Fox said.

A representative from Mid Coast Hospital’s Addiction Resource Center told the audience the center has a location on Bristol Road in Damariscotta and does not turn anyone away for inability to pay.

Another screening of the film and discussion will take place at 2 p.m., Sunday, Feb. 10 at Boothbay Region High School.