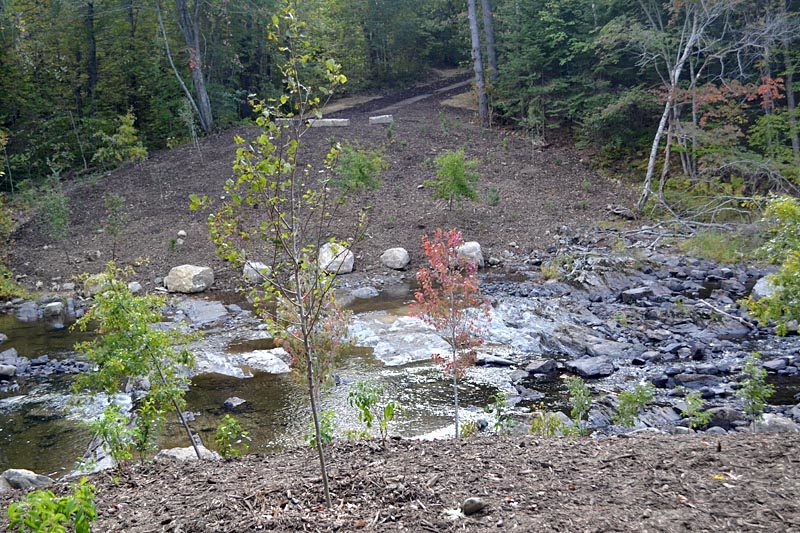 The site of the former Northy Bridge on Howe Road in Whitefield on Wednesday, Sept. 28. The bridge was removed earlier in the week. (Abigail Adams photo)

The removal of the Northy Bridge on Howe Road in Whitefield was completed ahead of schedule and under budget Monday, Sept. 26, according to Maine Department of Transportation Project Manager Mark Parlin.

A DOT official was spreading seeds at the site Wednesday, Sept. 28, part of the DOT’s plan to restore the native landscape of Howe Road so it would appear as if the bridge was never there.

With just days’ notice in December 2015, the DOT announced that the bridge, built in 1936, was no longer safe for vehicular or pedestrian traffic and closed it. Howe Road was transformed into two dead-end streets – Howe Road North and Howe Road South.

In a public hearing in June, the DOT laid out the process for the bridge’s removal. Whitefield officials suggested various proposals to enhance the recreational use of the site, most of which were unsuccessful.

The bridge crosses the West Branch of the Sheepscot River, and there is both a Midcoast Conservancy trail and a town-maintained hiking trail in the area. A footbridge was proposed by residents and selectmen at the June public hearing to enable pedestrians to cross the river.

The footbridge would have required leaving the abutments of the bridge in place, which DOT officials said would be a safety hazard. The Midcoast Conservancy owns property on Howe Road South, where Whitefield Board of Selectmen Chairman Dennis Merrill proposed a parking area to increase access to the site.

The proposal did not come to fruition due to the timeframe for the project. The DOT would not have been able to use state and federal dollars for work on private property, and the town did not have time to negotiate an easement on the property.

The concrete barricades currently blocking the end of Howe Road North and Howe Road South will be removed, with boulders marking the end of the roads, Merrill said. Parts of the abutments from the bridge were transformed into seating at the banks of the river.

Trees were planted at an angle along the banks to provide shade to the river. The resulting cooler water is preferred by the fish, such as the Atlantic salmon, that inhabit the river. 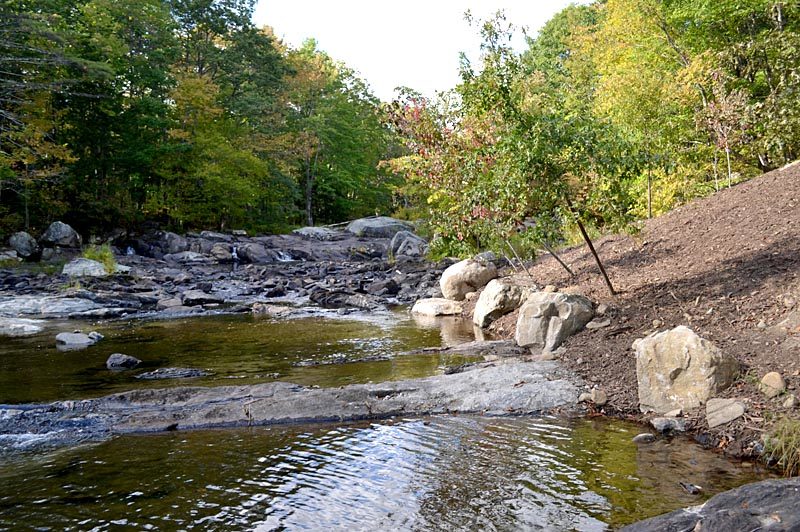 Trees were planted at an angle at the site of the former Northy Bridge on Howe Road in Whitefield to provide shade and cool the water for the fish in the West Branch of the Sheepscot River. (Abigail Adams photo)

Due to the Atlantic salmon, DOT officials have said the department would go above and beyond what it normally does for bridge removal in restoring the natural landscape of the area.

The project was estimated to cost $250,000 and was scheduled to be completed by November. While the project has not officially been closed out yet, the actual cost was just under $200,000, and work is, for the most part, complete, Parlin said. “It looks really nice there,” Parlin said. “It’s going to be a great place for hiking and to sit and relax by the river.”