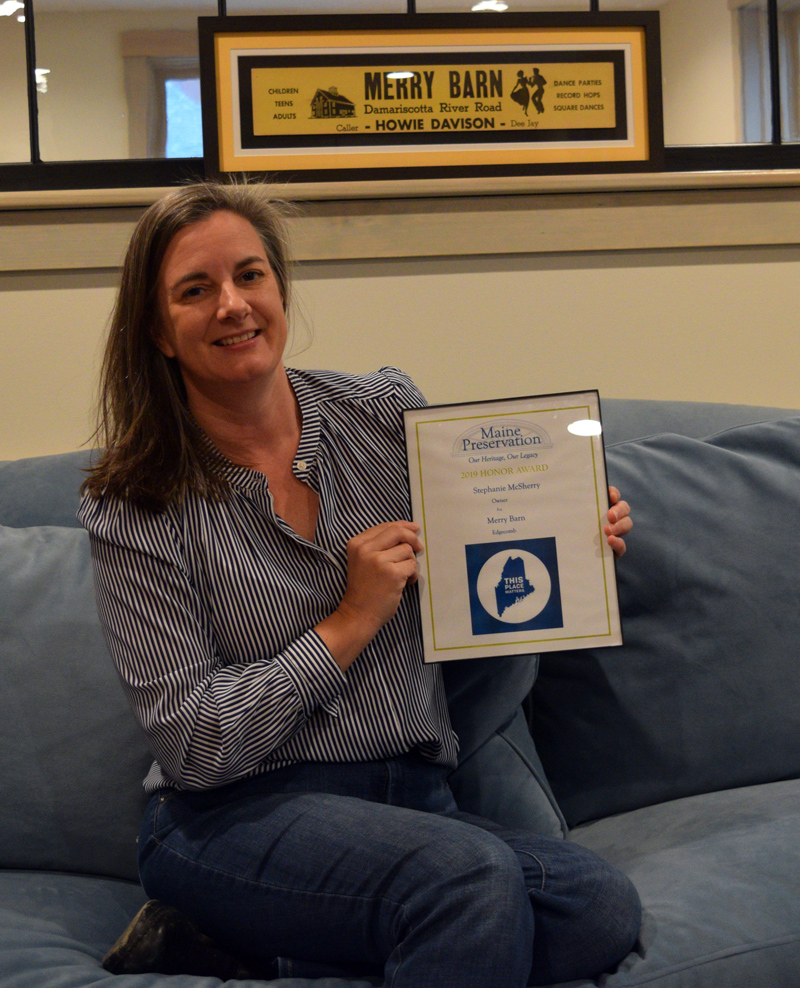 Merry Barn, of Edgecomb, was one of a dozen projects in the state to win a 2019 Honor Award from Maine Preservation.

Since 1998, the Yarmouth-based nonprofit Maine Preservation has recognized preservation projects and those who complete them. This year’s awards ceremony took place at the Portland Country Club in Falmouth on Wednesday, Nov. 20.

“I felt so incredibly grateful,” she said. Of the people who contributed to the renovation of the building, she said, “Some of these people a year ago I didn’t even know, and their heart and soul and their incredible talent went into making this place.”

“It’s so wonderful for this barn to be recognized,” she said.

In August, McSherry received an email from Ali Barrionuevo, real estate manager with Maine Preservation, who said the nonprofit learned about the work at Merry Barn through a previous article by The Lincoln County News and suggested McSherry enter it into the running for an Honor Award.

“It’s a great example of how Mainers can modernize their historic properties while retaining their special character,” Barrionuevo said.

McSherry filled out an application with help from Neal Groton, the contractor for the renovation, and Dan Phelps, the architect.

“They got specifics about what we did and how, structurally, we preserved things and how, aesthetically, they brought back in certain design elements to honor the history of the barn,” McSherry said.

A video shown at the awards ceremony detailed the improvements completed to convert the barn into a literacy center.

The basement and first floor were made handicapped-accessible. A well and septic were installed, as well as plumbing and bathrooms.

Staircases were rebuilt to comply with applicable codes. Structural upgrades to the floor frame were completed to reinforce the space. Heating and cooling systems were upgraded, as was the kitchen. Walls were added to make a first-floor classroom.

“All work on the structure was executed with care so as to not disrupt the historic integrity of the barn,” Barrionuevo said. “This care is evident when looking at the exterior of the barn, which remains much the same as it did when the barn was converted into the dance hall over 60 years ago. The outcome of the project is ideal – the utility of the building was increased and the historic fabric respected.”

In 1768, Joseph Merry acquired the property through a land grant. When he died, the land was split between his children, according to Darby Langdon, of the Edgecomb Historical Society. At different points during the barn’s existence, it has had various uses.

From the early 1950s to the mid-1970s, it was a dance hall that would pack in as many as 600 concertgoers. Later it was a workshop for a steeplejack business.

Groton, of Groton Construction Co., and Phelps, of Phelps Architects Inc., said this was the first time either has received a Maine Preservation award.

“The project was an awesome experience,” Groton said. “To be part of overseeing and preserving the Merry Barn will be one my best achievements.”

“Being part of the effort to repurpose the use and functionality of a local landmark such as the Merry Barn for the community is gratifying,” Phelps said.

McSherry has a framed certificate, but intends to purchase a metal award plaque from the nonprofit to place outside the barn.

Renys, the department store chain based in neighboring Newcastle, received the Earle G. Shettleworth Jr. Preservation Champion Award in the last presentation of the night. John Reny mentioned the Merry Barn when he accepted the award.

“He turned to me in the audience … and he said, ‘My band, when I was in high school, we used to play at the Merry Barn. We had good times there,’” McSherry said.

“You could see his face transform into this 16-year-old kid again. It was great,” she said. 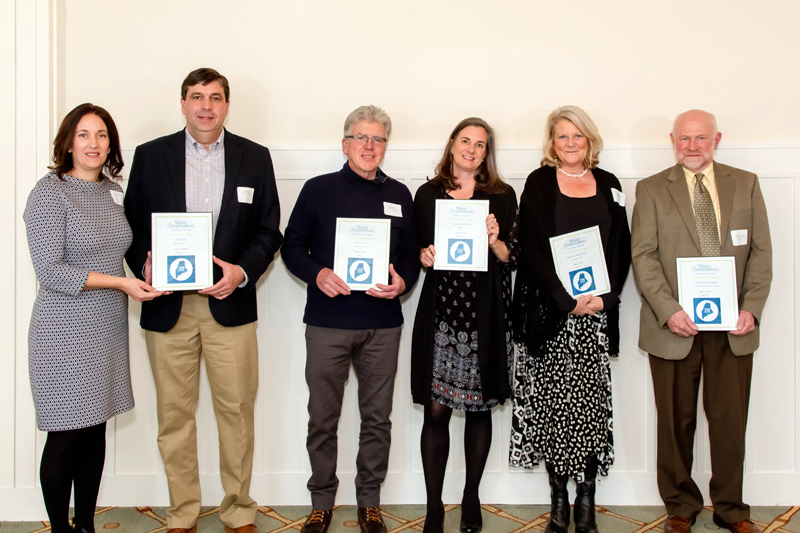 Since opening this summer, McSherry said her literacy center has been successful, and the summer camps for children have grown each week.

“This fall it’s been weird, because I so miss having their voices and their laughter in the barn, because it brings a whole different energy,” she said.

Before summer comes around again, there will be another camp Feb. 19-21 that will incorporate writing, reading, and movement.

McSherry said Brown has completed research about movement, learning, and the brain. She owns Learning on the Move LLC, which delivers workshops that educate teachers, children, and students on how the brain and body learn best.

“It’s going to be integrating the literacy piece with the movement piece,” McSherry said. Children will learn circus arts, such as juggling scarves.

McSherry will start hosting free monthly literacy events for all ages beginning in January, with donations accepted to go toward scholarships for children’s summer programs.

“The idea is for families or friends to come together and hear some great literature, have discussions about it, and create something themselves,” McSherry said.

Event details will be posted at merrybarn.com.