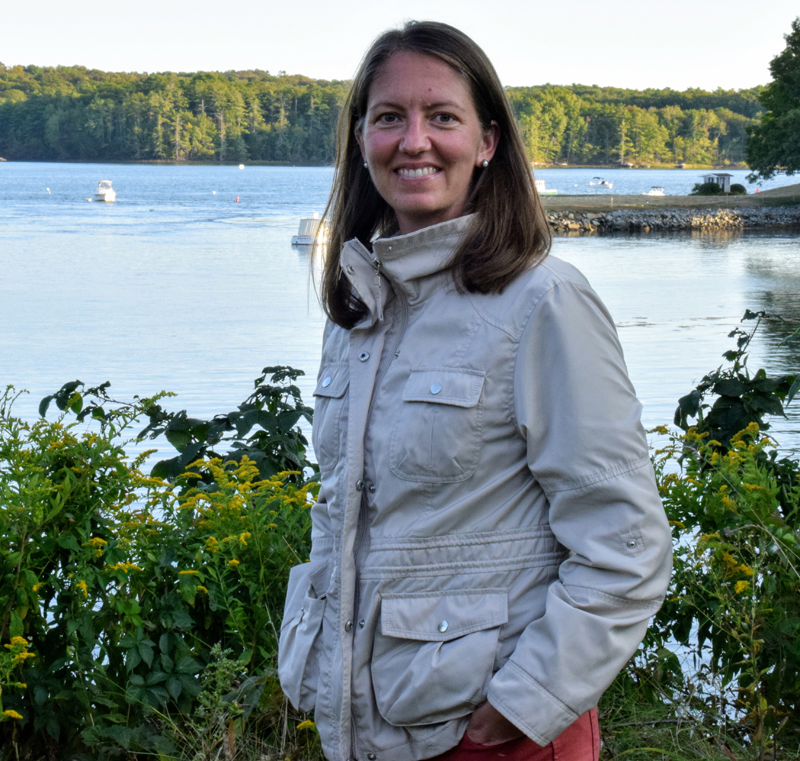 Rep. Lydia Crafts in front of the Newcastle waterfront in October 2020. (LCN file)

Newcastle’s Lydia Crafts is the incumbent Democratic candidate running for House District 46. Looking toward another term, she is focused on mental healthcare, the state’s opioid crisis, and affordable housing.

Crafts works at Bristol Consolidated School as a social worker with the Compass Program, a behavioral support service for children with autism, mood disorders, attention deficit disorder, or other issues that hinder learning.

Crafts grew up in Belfast and, after a period of time running an organic vegetable farm out west, settled in Maine in her mid-twenties. She studied geology and anthropology at Smith College and earned a master’s degree in social work from the University of Maine.

“I really felt that it was a fallacy that Maine couldn’t offer young people a quality of life and a future,” she said in a phone interview on March 24.

Looking towards the remainder of her current term and potentially another, Crafts wants to see the state’s healthy budget surplus and forecasted revenue go towards issues and initiatives that have otherwise gone under-addressed.

“What I’ve learned in the last year and a half is only going to inform what this next term looks like and I’m excited to keep working for the district,” she said.

“The burden that … puts on the individual is immense and doesn’t serve their medical needs, but it’s also a huge burden on our small local hospitals that are then unable to use those beds to serve more acute … medical crises that they’re intended to,” she said.

Towards the end of reducing the strain on emergency services, Crafts said that addressing Maine’s opioid epidemic will continue to be a priority for her going into Maine’s next legislative session and her potential next term.

Crafts is a member of the legislature’s Behavioral Health Caucus, a bipartisan group of senators and representatives focused on improving Maine’s mental health support infrastructure. She is also eager to serve on the Opioid Settlement Fund Advisory Council, which will help to decide how the state invests the $18 million that it received from the Purdue Pharmaceuticals lawsuit.

“For those of us, like myself, who have lost loved ones to overdose deaths, it continues to be a huge priority for me,” she said.

Something that Crafts is particularly proud of working on in her past year in the house is a bill to expand Maine’s “Good Samaritan” law, which protects those at the scene of an overdose from legal prosecution if they call emergency services.

However, the law does not currently protect other parties at the scene of an overdose from criminal charges. Should LD 1862, presented by Sen. Chloe Maxmin with Crafts’ support, become law that would change.

“Because of our criminal justice policies around addiction, people aren’t calling for help,” she said. “Calling for help and access to Narcan is a life-saving intervention.”

Crafts is also member of the Joint Standing Committee on Marine Resources and she has been an advocate for various bills to support lobstermen as they contend with gear modifications and other new rules and regulations instituted to protect right whales off the coast of Maine.

She added that the Maine Department of Marine Resources has struggled to keep up with the aquaculture lease application process and she has been part of the effort to increase the budget for the department’s permitting process so that the growing aquaculture industry “doesn’t feel hampered by state bureaucracy.”

“It has been a pleasure and a great joy to learn something new. I did not go into politics because I was an expert and my work on the committee has certainly been an example of that,” she said.

While Crafts came into the Legislature with Democratic majorities in both the House and Senate, she said that she is not afraid to break from the party’s platform when it is in her constituents’ interest.

Most recently, the House took up a bill, backed by the Maine Democratic Party that would have permitted municipalities to establish additional fees for those town residents whose homes are not their year-round, primary residences.

Crafts said that she heard concerns regarding the bill from her constituents involved in real estate and those that can only afford to keep homes they’ve inherited by renting them out for part of the year, and she ultimately decided to oppose the bill based on that feedback.

“Partisanship in Augusta is strong, and I have known from the beginning that, while my values align with the Democratic Party primarily … I’m not always going to fall in line,” she said. “At the end of the day, what my party thinks of me doesn’t matter; it’s really what the voters in my district think of me and how I’m able to lead.”

However, Crafts said that she supports other housing policy that would help to address Maine’s shortage of housing units, including a bill currently before the Legislature that would empower property owners to build accessory dwelling units, in spite of many towns’ ordinances that prohibit such structures.

Crafts said that she would also like to see a county-wide strategic plan for towns’ comprehensive planning processes so that when the county receives funds from the state, it already has the infrastructure in place to distribute them.

“We need workforce housing, we need young working people to be able to afford to live in the county if we want to have a workforce that’s sufficient,” she said.

Crafts said that she also supports additional funding for early childhood education programs as she understands that affordable childcare is nearly as important for working families as affordable housing.

“In order to have that high quality childcare, we need to be sure that we are paying adequate wages and we already know that childcare, for working families, is a huge financial burden,” she said.

Towards the end of reducing the financial burden on working families, one of Crafts’ over-arching goals going into her next term is to find ways to reduce the price of public utilities. In particular, she believes that the state would benefit from a publicly owned utility, rather than one owned by an international corporation.

She would also like to see the state continue to invest in alternative energy infrastructure to meet Maine’s energy needs and climate goals in the next 15 years.