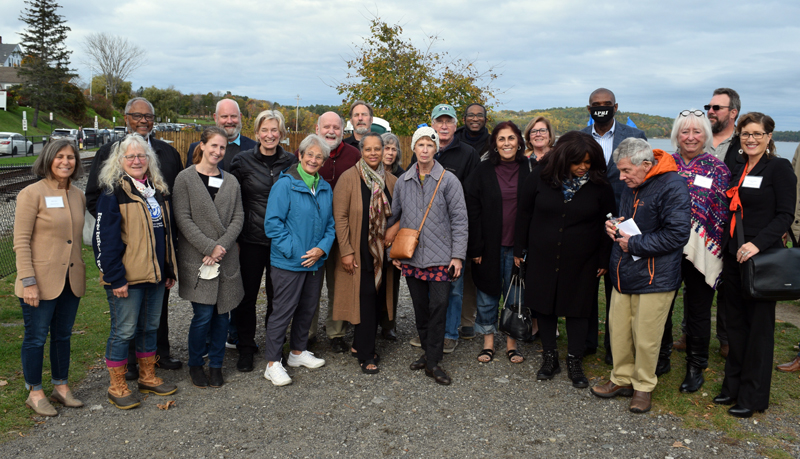 Residents of Wiscasset, historians, artists, representatives, and other stakeholders gathered on Oct. 23 to discuss the future of an observance of James Weldon Johnson Day (June 17) and a memorial to the civil rights figure near the site of his death. (Nate Poole photo)

Stakeholders from Wiscasset and well beyond gathered at the Wiscasset Community Center on Oct. 23 to honor a monumental figure in American history who passed away in the small coastal village.

Most commonly remembered now as the author of the “Black National Anthem,” a poem turned song titled, “Lift Ev’ry Voice and Sing,” James Weldon Johnson accomplished much in his life as a writer, lawyer, educator, consul, and leader of the NAACP.

It was a life also cut short in 1938 in Wiscasset. He and his wife, Grace Nail Johnson, were returning to their New York residence after visiting their friend, E. George Payne, at Pleasant Point in Thomaston, when their vehicle was struck by a train on Main Street, killing Johnson on impact.

The event, “James Weldon Johnson: Towards a Memorial and Annual Observance,” was hosted by the Permanent Commission on the Status of Racial, Indigenous, and Tribal Populations, a quasi-governmental entity established in 2019 to examine systemic inequalities experienced across Maine’s racial, indigenous, and tribal populations.

The goal of the event was to honor James Weldon Johnson with a number of presentations and a blessing at the location of Johnson’s death, but organizers also solicited input from the community and stakeholders in and outside of Maine regarding the future of a memorial and an annual observance of Johnson’s life centered in Wiscasset.

Ross said that it was a conversation with former Florida Sen. Tony Hill that inspired her to present L.D. 1441 to the legislature, and he made a case for a marker on Saturday.

Hill said that he’s seen markers in different places around the U.S. that would say, “Lincoln stayed here, Roosevelt spent the night here.”

“James Weldon Johnson died here. And that’s why we’re here today. He made a contribution to our world,” he said.

In Jacksonville, Hill is part of a much larger project, in terms of scale, building a $5 million park where Johnson was born. However, he also argued that the disparate communities of Jacksonville and Wiscasset are indelibly connected not only by James Weldon Johnson’s death, but also by U.S. Route 1, which runs through Jacksonville to Key West.

“We have an opportunity to make that week in June not just celebratory, but focused on public education,” Talbot Ross said.

She and Bob Greene, a journalist and Maine historian, argued that it would be abundantly important with any observance of James Weldon Johnson to connect it to Maine’s own Black history. Greene noted in his own remarks that Wiscasset’s celebrated shipbuilding history was fueled by the slave trade and the shipping of cotton out of the south.

Wiscasset Selectman Kim Andersson also offered some remarks at the event, and she took the time to address that prior to the pandemic she hadn’t thought much about racial justice in her day-to-day life.

However, she described George Floyd’s murder in May 2020 as the beginning of a “reconciliation,” and said she saw a marker for Johnson as a way to draw attention to a figure “we all need to hear about.”

During the brainstorming session, Hill suggested it may be beneficial for Wiscasset and Jacksonville to pursue an exchange program with two of their high schools, in addition to other means of connecting the two cities, such as opening up a line of communication between their two chambers of commerce.

Other attendees from the Wiscasset community shared their ideas for how to approach branding an observance, how to connect it to Maine’s history and Wiscasset’s shipbuilding history, and how to leverage it as an educational opportunity for students.

Following the forum, attendees and presenters met at the train tracks on Main Street in Wiscasset where Johnson passed away to join The Rev. Al Niese of Woolwich, who first proposed a marker for James Weldon Johnson to the Wiscasset selectmen in 2013, in a blessing of the site.

Over the phone on Oct. 25, Dr. Meadow Dibble, director of community-engaged research for the commission and one of the parties responsible for putting Saturday’s event together, said she will be sending out a survey to attendees of the event and anticipates having the observance task force together by the end of November.

They will need to have the beginnings of a plan together to include in a progress report to the legislature by January.

Those who wish to be involved in the ongoing efforts to memorialize Johnson in Wiscasset can reach Dibble at meadow_dibble@brown.edu.