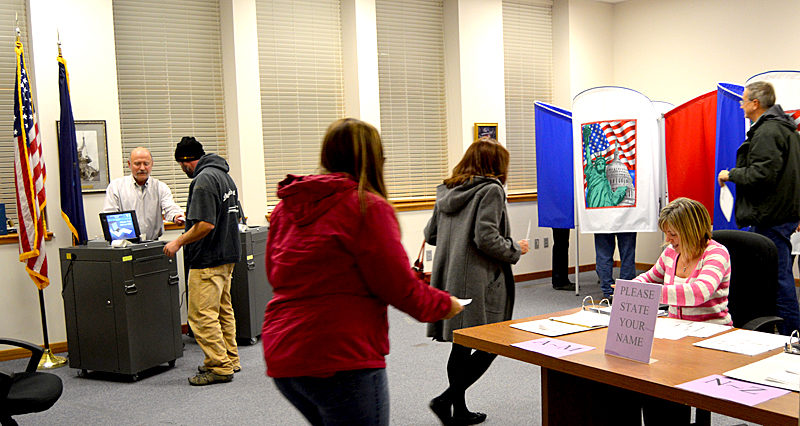 Republicans were the big winners of the 2016 election in Lincoln County, taking a Senate seat from a three-term incumbent and winning six of the county’s seven House seats.

Dana L. Dow, R-Waldoboro, a businessman and former lawmaker, will return to the Maine Senate after defeating three-term incumbent Sen. Christopher K. “Chris” Johnson, D-Somerville, in Senate District 13. The final tally was 12,108-10,759, according to unofficial results.

Senate District 13 includes all of Lincoln County except Dresden, plus Washington in Knox County and Windsor in Kennebec County.

“I want to thank the people for having enough faith in me that they are willing to send me back to Augusta,” Dow said.

Dow was in the Maine Senate from 2004-2008 and the Maine House of Representatives from 2010-2012. The owner of Dow Furniture and Dow Discount in Waldoboro, he emphasized business and the economy in this year’s campaign.

“It’s always been my prime goal to get Maine back to work,” Dow said.

Johnson said he called Dow to congratulate him and concede the race shortly after 1 a.m. Wednesday.

“I think we ran a good, solid campaign,” Johnson said. He thinks strong Republican turnout to support President-elect Donald J. Trump and perhaps to vote on some of the state ballot questions gave the edge to his opponent.

Johnson said it’s too early to know whether he would run for the Legislature again.

“I feel very strongly about a lot of the things I have started to work on,” Johnson said, and he regrets that he won’t be able to continue that work in the Legislature. “I’ll be trying to figure out in the coming weeks where to focus my efforts in the future,” he said.

“It’s been an honor to serve the people of Senate District 13,” Johnson said.

Abden S. Simmons, R-Waldoboro, will be the next representative of House District 91, which includes Waldoboro in Lincoln County and Friendship, part of Union, and Washington in Knox County. Rep. Jeffrey Evangelos, I-Friendship, holds the seat now but did not run for re-election.

“I’d like to tell everyone who voted for me and supported me, I appreciate it 110 percent,” Simmons said.

Simmons is a commercial fisherman and seafood buyer and sits on the Waldoboro Board of Selectmen. “I want to work on making sure we have jobs in the state,” he said.

Trask-Eaton is a former Waldoboro business owner and physician.

“I am honored and humbled by the support I’ve received from old and new friends alike and cherish the time I’ve spent talking with voters across our district at their doors,” Trask-Eaton said in an email to The Lincoln County News. “I congratulate my opponent on his victory and look forward to continuing to work to make our community and state the best it can be.”

In Senate District 23, former Sen. Eloise A. Vitelli, D-Arrowsic, will return to the Legislature after defeating Guy M. Lebida, R-Bowdoin, 11,927-10,681. The district consists of Dresden in Lincoln County and all of Sagadahoc County.

The Legislature needs to work on drug addiction and education funding, and balance those issues with the interests of businesses and the economy, Pierce said.

“I’m going to use common sense like I always do,” Pierce said.

Neilson, a restaurant owner, said that “overall the election was quite a surprise and I think the national trends were reflected locally. It’s not what anyone expected, or at least what some people expected, but the voters have spoken … and we will move forward.”

“I look forward to being involved in the political process and continuing to work to improve the lives of people in the Midcoast,” Neilson said. “There’s going to be lots of work to do in the future and hopefully we’ll find ways to work across the aisle to get things done.”

Ross thanked her supporters and “the people I met at the doors … for the insight they gave me about their fears, insecurities, and daily problems.”

“I wish I could work for them in the Legislature, but the voters have spoken,” Ross said. “I congratulate my opponent, Jeff Hanley, for his win.”

“What a wonderful experience this race has been!” Torbert said in an email to The Lincoln County News. “During the last three months, I have knocked on thousands of doors and talked with hundreds of voters on every road, street, and lane in all of the four towns that make up Maine House District 88.

“I am honored to continue to go back to Augusta and serve, and I look forward to representing everyone in House District 90,” Devin said.

Mayer said she was “pleased” to take about 41 percent of the vote. “Mick is a two-term incumbent and I knew it would be an uphill battle,” she said.

“I congratulate Mick and look forward to working with him and the senator for the next two years to make sure they address the concerns and needs of the people of Lincoln County,” she said. “I still have a job to do, both as a Damariscotta selectman and on the Lincoln County Budget Advisory Committee, and there is still work to be done.”