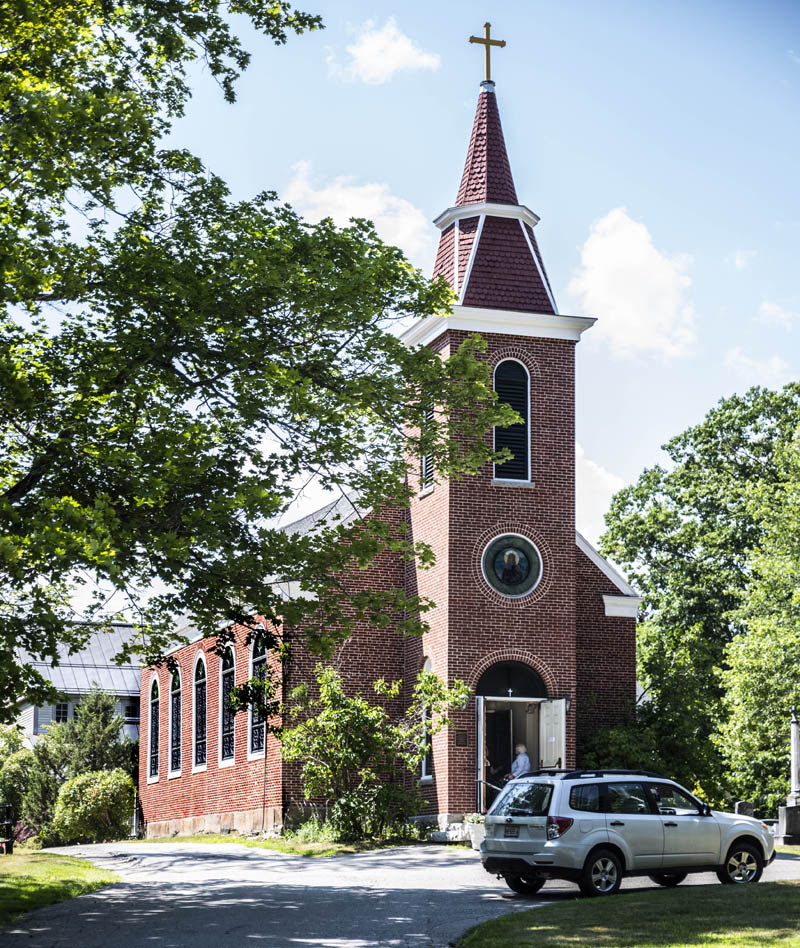 Visitors are given the opportunity to ring the bell in the narthex at St. Patrick Church in Newcastle on Sunday, July 17. The bell ringing was part of the day’s celebration marking the completion of the renovation of the original church building. (Bisi Cameron Yee photo)

The bells of St. Patrick’s Church in Newcastle rang out on Sunday, July 17 to celebrate the restoration of the historic building’s exterior. The day marked the conclusion of a nine-year-long project to help preserve the church for future generations.

As part of the celebration, the church hosted a reception with a presentation by church historian Carrie Watson. A display at the on-site museum documenting the restoration process was open to the public and members of the church history group were on hand to introduce visitors to other aspects of the church property including the cemetery, the outdoor chapel, and the larger modern nave that was added to accommodate the church’s growing congregation.

St. Patrick’s turned 214 years old on July 18, 2022. Built in 1807 and consecrated in 1808, it is widely recognized as the oldest active Roman Catholic Church in New England. It was added to the National Register of Historic Places in 1973.

Chet Hopkins, a member of both the St. Patrick’s Church History group and the church’s finance committee, originally noted the deterioration of the original building’s facade and brought it to the attention of the congregation in 2013.

Over time attempts to fix smaller issues contributed to the necessity for the larger project, Kronenberger said. In making repairs, well-meaning custodians often caused more damage by going to a local hardware store and buying bags of mortar to apply, a process Kronenberger called “buttering the surface.”

Different kinds and colors of mortar were used and eventually the mortar joints began to fail.

“It all had to be excavated and replaced,” Kronenberger said.

Kronenberger and Sons put together a detailed analysis of what would be needed to make the necessary fixes and determined an initial estimate of $300,000.

That cost increased as the cost of raw materials increased, but Kronenberger said he was pleased to bring the project in at just over $20,000 more than originally proposed.

The parishioners of St. Patrick’s Church donated the bulk of the funds, and a privately owned lay trust had committed an additional $112,000 toward the restorations, according to a 2021 newsletter to parishioners put out by All Saints Parish, a faith community of seven Roman Catholic churches that includes St. Patrick’s.

Fixing the brick was a significant challenge, according to Kronenberger. The original handmade bricks had been fired at the Hanley brickyard in Bristol using mortar made with lime that is no longer available. Kronenberger and Sons Restoration had to find bricks that matched not just size but color.

Approximately 400 bricks were needed and after running tests on the original bricks, a recipe was developed to recreate both the bricks and the mortar. The bricks are not exact replicas, however. According to Kronenberger the older bricks are much longer, a little wider, and very thin.

Everything had to be on site before construction could start to ensure that all the required elements for the job could be obtained.

Near the conclusion of her presentation, Watson described talking to one of the masons involved with repairing the brickwork who told her “bricks breathe.” That idea resonated with her.

“You just have to come into this church to feel that our bricks are breathing, that God is breathing into them,” she said.

Once work began it became clear that the 10 stained glass windows would also need repair. Plexiglass inserts had been placed in the windows in an effort to protect them, but the sun created what Watson called an “oven effect” inside the inserts that caused the lead holding some of the windows together to melt.

The Cottrill window on the south side facing the altar was the most damaged. The windows were removed and sent out for restoration in September 2021. They weren’t returned until March.

The original windows were clear glass, but were replaced in 1892. Other than their color and the small house crest medallions located near the top of the panes, the replacement windows share the same floral configuration of glass and lead. Watson said that an unconfirmed story suggested that the windows were actually purchased from Sears, Roebuck and Co., what she called “the Amazon of the day.”

The roof was less of an issue, although the replacement shingles are asphalt, a move necessitated by cost-saving measures. Still, the roof should last 40 years, according to Watson and Kronenberger and the bricks should last far longer.