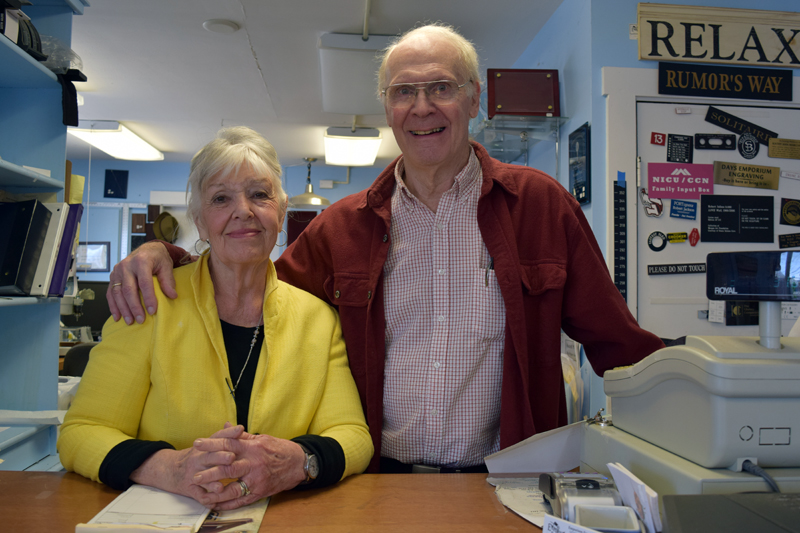 Ellie and John Day behind the counter at Emporium Engraving in Newcastle on Friday, April 14. (J.W. Oliver photo)

The owners of Emporium Engraving in Newcastle would like to retire soon, but hope to first find a new owner for the business who will keep it in the area.

John and Ellie Day, of Jefferson, started the business under the name Days Emporium in 2001. The original location was at 77 Main St. in Newcastle, in the now-vacant space next to the present-day location of Mainely Nails.

Days Emporium was at 77 Main St. for about four years. The business was originally “an old country gift store,” the Days said. As part of the business, they offered engraving, but contracted the work out.

Near the end of the business’s time at its original location, the demand for engraving was growing. The gift shop was open seven days a week, and they were ready for something “a little less intense,” Ellie Day said.

With a degree in mechanical engineering from the University of Maine and “a fantastic graphic sense,” John Day “had the bag of tools for doing engraving,” she said.

So the Days decided to go into the engraving business. They invested about $9,000 in equipment (they have much more now) and John Day learned the trade.

In 2005, Days Emporium moved to its current location on the corner of Academy Hill Road, Main Street, and Mills Road. The Days changed the name to Emporium Engraving two years ago. 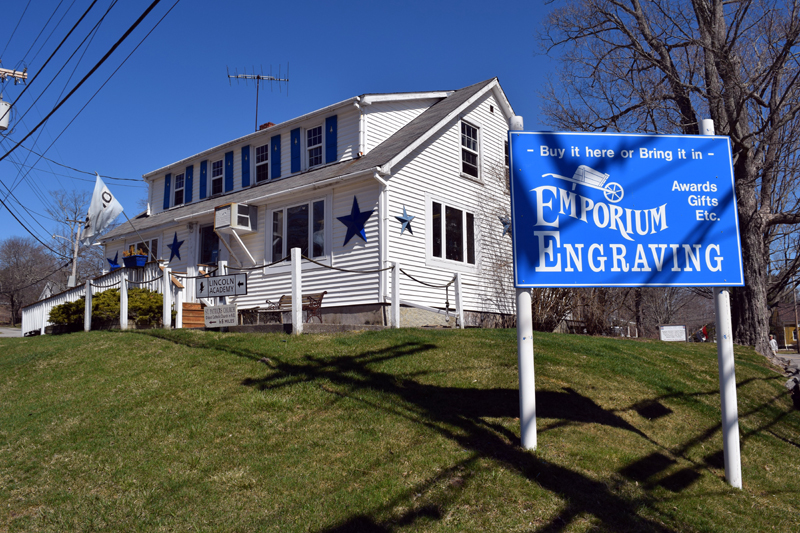 The current home of Emporium Engraving at the intersection of Academy Hill Road, Main Street, and Mills Road in Newcastle. (J.W. Oliver photo)

The business has a shop where customers can walk in and buy items for engraving, and customers also bring items in for engraving. But the Days estimate that two-thirds to three-quarters of their business comes from long-term relationships with large customers.

The business engraves awards, plaques, trophies, and gifts for anniversaries, birthdays, and retirements, among other items. Its roster of repeat customers includes businesses, nonprofits, schools, towns, churches, and fire departments.

“Year after year, season after season, as long as you deliver the product on time at a fair price, you have the business,” John Day said. “You don’t really have to go out and seek that business.”

John Day describes what they do as “computer-assisted mechanical engraving.” He designs an engraving on a computer and sends a file to a machine that engraves the product. They engrave glass, metal, plastic, and other materials.

But as John Day nears his 80th birthday, the Days are ready to retire – with conditions.

“We are loyal to these people,” Ellie Day said of their long-term customers. “We want very much for someone to be interested in this business that will keep it local. We want our customers to continue to be served. That is something we feel strongly about.”

The Days are ready to offer support and training to a new owner if necessary.

“We want to transfer this business into new hands while I still have the wherewithal to be of support to that individual or organization, because there is a learning curve,” John Day said. 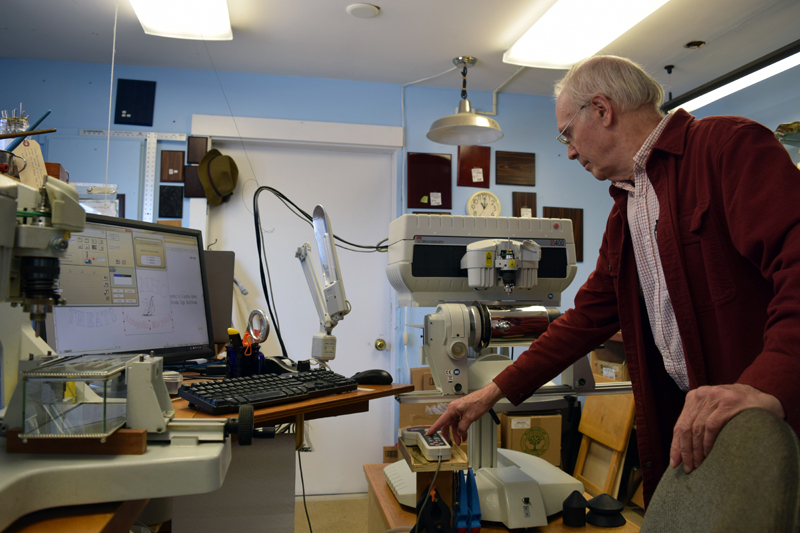 John Day demonstrates some of the equipment at Emporium Engraving in Newcastle on Friday, April 14. (J.W. Oliver photo)

He is willing to stay on as a consultant or employee if desired. He charges at least $60 an hour for engraving, but would take much less during a transition in ownership.

“I could imagine a scenario where an organization that buys this might want me back there to assist as a consultant or an employee, at a clerk’s wage, doing engraving for them,” he said.

And if a buyer just wants him to come back from time to time to help with a complex order, that would be OK too.

“We’re around. We’re not leaving the community,” he said. “I don’t plan to get hit by a bus tomorrow, and I still have the bag of tools to be an adviser or a doer.”

The Days see three categories of potential buyers: someone like the Days, looking for a second career or supplementary income; an existing business, like a hardware or office-supply store, that wants to expand into engraving; or a young person looking for a new career.

Whoever buys the business, the owner will need to learn the trade.

“We don’t see this business being operated by an employee or a clerk-type person, because the technology base is too heavy,” John Day said. “The person who is going to learn to be the expert at engraving – that doesn’t mean that person has to do the engraving, but he has to know it – that’s going to be somebody who has a large stake in that business, be it a one-man or two-man operation or a larger organization.”

The Days are frank about the business’s income. “It does very nicely, it throws very good money into our pockets, but it won’t support a family as it sits,” John Day said.

But they also see opportunity for a new owner with the energy and knowledge to market the business more aggressively, work hard, and embrace new technologies.

The business is open just 20-28 hours a week, depending on the season. It has a website at emporiumengraving.com, but has yet to enter the realm of social media.

“But I do think a young person who is into those things could really expand this business, and maybe they’d like to do some online sales of certain things,” Ellie Day said. “We don’t want to do that.”

Bob and Lynn Plourde, who own and operate Mail It 4 U next door, own the building.  A new owner could keep it in the same space or move it somewhere else – into an existing business or even a home workshop.

More than anything else, the Days want the business to stay in the area. “We would be so happy to think it would hang around,” Ellie Day said.

Emporium Engraving, 3 Academy Hill Road, Newcastle, is open Tuesday-Friday from noon-5 p.m. from January through April and 10 a.m. to 5 p.m. from May through December, or by appointment.