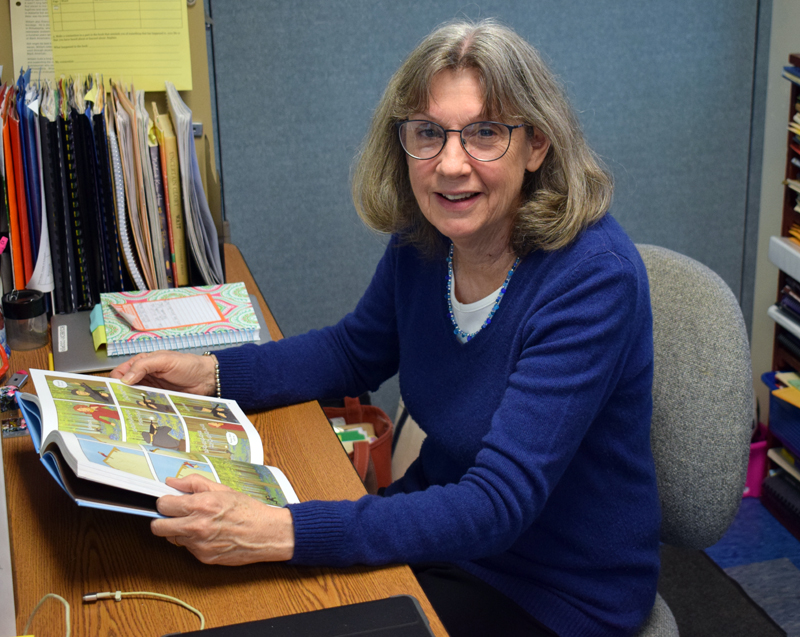 Retiring Bristol Consolidated School teacher Becky Cooper looks up from her book in her classroom on Feb. 10. Cooper will be retiring at the end of the 2020 school year after 31 years teaching at BCS. (Evan Houk photo)

After 36 years of teaching, retiring Bristol Consolidated School teacher Becky Cooper said her enthusiasm and passion for her career has never waned.

“I have never had a boring day as a teacher in my entire career. … Every single day is different,” Cooper said in a recent interview in her elaborately decorated classroom on Feb. 10.

It is Cooper’s love of reading and writing that has sustained her interest in teaching, as well as the fulfillment that comes with creating an “atmosphere of joy for books,” as she put it, in her students.

Cooper originally started her teaching career at the now-shuttered Bremen Elementary School after graduating from the University of Maine in Orono with a bachelor’s degree in secondary English education in 1974.

Cooper taught at the Bremen school for five years, before taking a 10-year hiatus to raise her two sons, Nick and Andrew.

During this time, Cooper received a master’s degree in literacy specialism in order to expand her knowledge for use in the classroom. She then started to volunteer at BCS before eventually getting a job teaching second grade there in 1989.

Cooper said she always knew she wanted to be a teacher because of her love of reading and writing and her innate creativity, other than a brief time when she considered being a librarian.

Cooper’s mother, an art teacher, encouraged her to pursue teaching as a career that could provide an outlet for her creative urges.

During her time at BCS, Cooper has taught every grade level formally except for fourth grade.

This year, Cooper is teaching English language arts and social studies to seventh- and eighth-grade students, which she says is one of her favorite age levels to teach. “Middle school is either you laugh or cry. And I spend all day laughing. They are in such a unique time of life, one foot in childhood and one foot in high school and everything in between,” she said.

Cooper has a unique setup in which each student is able to choose from her vast library of books what they individually want to read as class assignments throughout the year. “I spend a lot of time scrounging for books. The school’s been very good in providing me a budget for books. … I have a really good selection for kids to choose from. And it works,” Cooper said.

She said she was inspired by the work of Nancy Atwell, who ran The Center for Teaching and Learning in Edgecomb at the time Cooper graduated from college. She said Atwell stressed time, choice, and sharing in teaching.

“All the research showed that when you choose what you want to read, you read a lot more,” Cooper said.

Cooper said the independent reading projects are only a small part of her curriculum, however, as she teaches and works with the students on various other English language and history lessons.

She said it is interesting to teach something like Edgar Allan Poe’s “The Raven” or the history of World War I and experience it through the students’ eyes for the first time. “It’s really cool to see the light bulb go off for them and to see them trying to grapple with this new stuff,” Cooper said.

Cooper said she has always loved teaching except for her traumatic first two weeks student teaching at Orono High School after college.

“I thought, oh, my God, I’ve made a terrible mistake,” Cooper said, since the students were not much younger than she was at the time and some of them were giving her a hard time.

“I remember one boy was sassy one day, and that was a little upsetting. But I’m the kind of person who just faces things; I think I get that from my mother. … You know, you fall off the horse and you get back on,” Cooper said.

Cooper offered some secrets that she has learned over the years in dealing with the sometimes-complicated student-teacher relationship dynamic.

“When you are with kids every day, you start to build a relationship with them, and you get to know them and they get to know you. And when you know somebody, it’s a human exchange every day. You’re not their friend, you’re not their relative, but if you respect them and show them you like them, then they will respect and like you back. That’s always been something I’ve relied on,” Cooper said.

She also said she is quick to laugh at herself, which helps with rapport with the students. “I’m always the first to make fun of myself. And if I do it before they do, I’m going to beat them to it,” she said.

Cooper also said she has enjoyed teaching multiple generations of students, including her two sons, her nieces, and now, her great niece.

“In fact, if you started actually going down the roster, I have had many, many children of children. It’s funny, one boy in eighth grade, one poor boy, I keep calling him by his father’s name. He’s very good-natured about it,” Cooper said with a laugh.

Cooper said she is also very proud of her several students that have gone on to become teachers.

Cooper said that Kayla Wright, who teaches English language arts at South Bristol School, has credited Cooper with inspiring her love of teaching.

Cooper also mentioned Jack Taylor, one her former students who is currently teaching at a university in Uganda. Taylor said that one of Cooper’s assignments, when he had to turn a story about Zaire (what is now known as the Democratic Republic of the Congo) into a poem, inspired his interest in African history.

One of Cooper’s most memorable experiences during her teaching tenure was traveling to Estonia as part of a teacher exchange program, where she taught and attended a reception and concert at the Swedish embassy.

“It was very cool to see how education is in another country that is so different from ours,” Cooper said.

After retirement, Cooper plans to make up for lost time and pursue her many extracurricular interests, as well as spend more time with her retired husband, Earle Cooper.

She said she plans to read, write, walk, and run outside; play trivia at The 1812 Farm; practice her French speaking; spend more time with friends; and do more sketching and jewelry-making.

Cooper also said she is excited to finally have a chance to visit Pemaquid Beach in September, which she sees as the best time of year to go.

Cooper said she will miss teaching greatly, even hinting at an eventual return to the school, possibly volunteering or substituting again one day.

“What is it they say? ‘Old teachers never die, they just lose their class… for a while,’” Cooper said with a laugh.