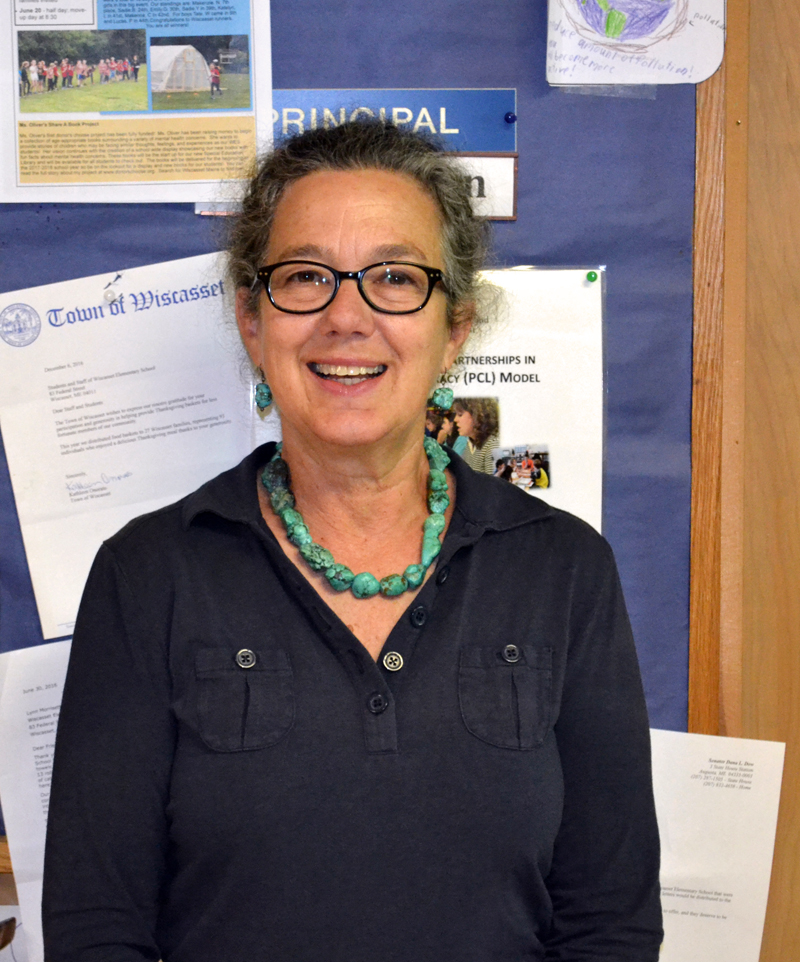 Longtime Wiscasset educator Mona Schlein was reluctant to accept a teaching position at the Wiscasset Primary School about 30 years ago. It turned out to be one of the best life choices she ever made, Schlein said.

On June 30, Schlein’s tenure in Wiscasset will come to an end. She began working as a first-grade teacher at the Wiscasset Primary School in 1988 and is retiring as the principal of Wiscasset Elementary School.

The community connections, the “meaningful, purposeful, and supportive” work of the coaching program, and the “tremendous teachers” and “amazing students” Schlein has worked with are among the highlights of her time in Wiscasset, she said.

“This is a true community school,” Schlein said.

Schlein began her career in education in New York City in inner-city schools, she said. Each summer, she would vacation in Maine with her husband. “After a few years, I would cry all the way home,” Schlein said. “I realized I wasn’t a city girl.”

Schlein’s family eventually moved to the Midcoast. “Every day, I’ve been thankful,” Schlein said. “I love living here. I love everything about Maine.”

Schlein continued her career in education, at first working with middle school students in the Portland area. When a position opened at the Wiscasset Primary School, she was called in for an interview, which she at first declined because the position was for a first-grade teacher.

“I loved working with older students, so I said ‘Thank you, but I’m not interested,’” Schlein said. The principal at the time encouraged Schlein to come in for the interview, if only just to talk. “It was such a great conversation, they convinced me,” Schlein said.

The decision to work at the primary school “was one of the best decisions I made in my career,” Schlein said. Schlein would go on to lead the reading recovery program in Wiscasset, which was the first site in Maine to develop the new curriculum through a partnership with the University of Maine, she said.

The reading recovery program focused on professional development, and Schlein worked with educators not only in Wiscasset but also throughout the state to improve the quality of literacy education for students.

However, the program was discontinued in one of the many transitions in administration Schlein witnessed during her career in Wiscasset, and she returned to the classroom. Reading recovery “is an important component to strengthening literacy,” Schlein said.

The position of principal opened at the Wiscasset Primary School the next year, and Schlein applied, due to her philosophy about leadership.

Schlein took the helm of the primary school just as the town voted to close it and transition to a two-school building district. The summer of her first year as principal was spent helping teachers and staff transition to the Wiscasset Elementary School, which was formerly the middle school.

The change was challenging, with educators at both the primary school and middle school leaving classrooms many had taught in for decades, Schlein said. “We worked hard to honor each other’s space and come together as a team in a new space and place,” she said.

Teachers and staff worked throughout the summer to decorate and paint their new classrooms, Schlein said. “They went above and beyond to make (Wiscasset Elementary School) a home for students,” she said.

Schlein is leaving the Wiscasset School Department as a new literacy and math coaching program gains steam. The ongoing professional development provided through the coaching program is an enormous resource for new staff joining the department, she said.

“I feel so good about the work being done here,” Schlein said. “We’re in a really good place.”

On July 1, Stacey White, a Lisbon educator, will start work as the new principal of the Wiscasset Elementary School. Schlein and White have had ongoing conversations to ensure a smooth transition, Schlein said.

Schlein leaves the department with decades of memories and community connections that span generations. The children of her former students are now attending Wiscasset Elementary, she  said.

Witnessing her former students grow and staying connected to them and their families throughout the years are among the most rewarding aspects of her career in Wiscasset, she said, in addition to the educators she has worked with.

“Teachers are the forefront and backbone of the school,” Schlein said. “They make a difference in the lives of kids everyday. I want to see them celebrated.”

Schlein currently has no plans for her retirement and is looking forward “to doing nothing for awhile,” she said.