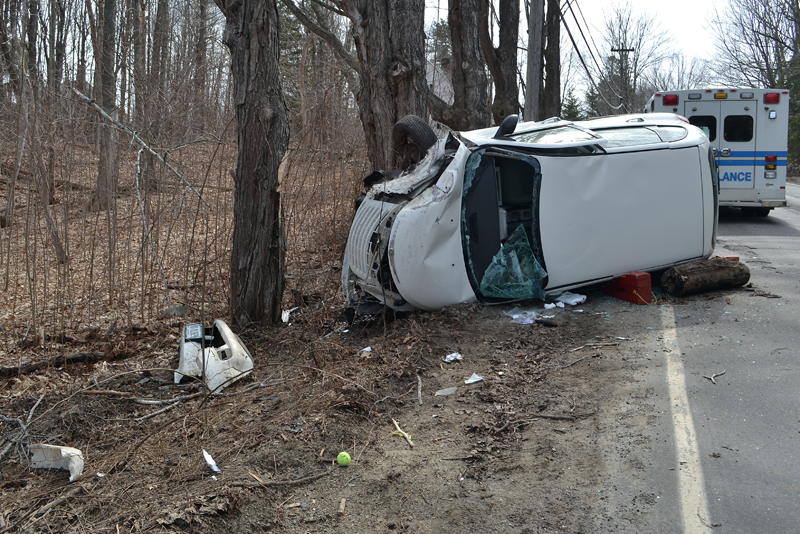 A driver sustained severe lacerations after a car accident near the entrance to LincolnHealth’s Miles Campus on Bristol Road in Damariscotta the afternoon of Tuesday, April 3. (Maia Zewert photo)

A driver was airlifted to Maine Medical Center in Portland after a car accident near the entrance to LincolnHealth’s Miles Campus on Bristol Road in Damariscotta the afternoon of Tuesday, April 3.

Jeanne M. Lane, 89, of Bristol, was driving her 2009 Chrysler PT Cruiser north on Bristol Road into Damariscotta when the accident occurred, according to Damariscotta Police Sgt. Erick Halpin.

Lane told officers she fell asleep while driving, Halpin said. The vehicle left the roadway and traveled on the shoulder of the road for about 75 feet before striking a tree and turning on its side.

Lane was “strapped in” and emergency responders had to extricate her, Halpin said.

Damariscotta Police Chief Jason Warlick got into the vehicle with Lane as Central Lincoln County Ambulance Service personnel, Damariscotta firefighters, and passersby helped her out of the vehicle. CLC Ambulance then transported Lane to LincolnHealth’s Miles Campus.

Lane sustained severe lacerations and chest injuries in the accident, and was airlifted from LincolnHealth to Maine Medical Center, Halpin said.

Speed is not believed to have been a factor in the accident, Halpin said.

Emergency personnel closed Bristol Road as Lane was extricated and again as Quick Turn Auto Repair & Towing removed the vehicle from the scene.