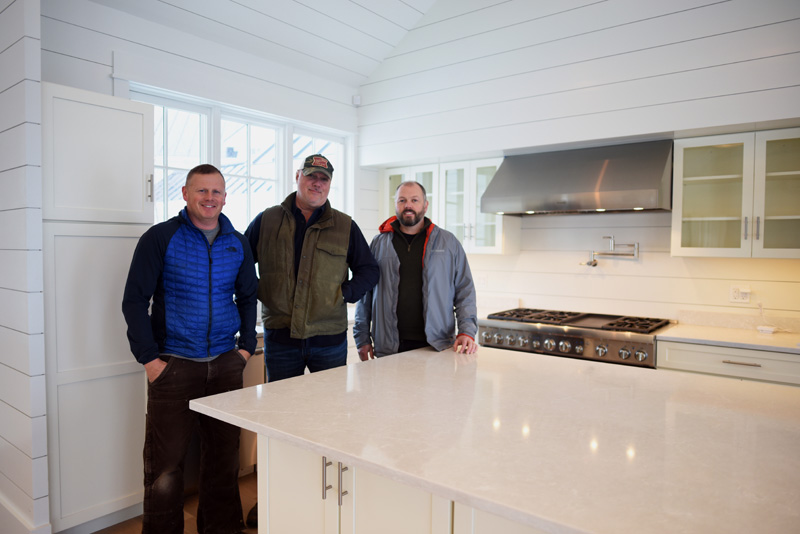 “Each generation is going to leave behind a landmark of either architecture or construction. This is worthy of that in a hundred years, I think,” Paul Leeman III, of Ledgewalker Builders, said.

The new house he is talking about is nestled in the village of Round Pond, overlooking the harbor and the conservation property known as Lupine Field.

The home, owned by the developer and restaurateur Xavier Cervera, was featured in the December issue of Maine Home + Design magazine. The issue featured 10 homes and 10 commercial properties considered to be on the “cutting edge.”

Cervera bought the property on Northern Point Road in fall 2016, with a vision of a home where each room had a view of the water and fields surrounding it.

He tore down the seasonal cottage on the property and enlisted Newcastle architect Tor Glendinning, owner of 44 Degrees North LLC, and Round Pond contractor Leeman, owner of Ledgewalker Builders LLC, to make the dream home a reality.

Cervera previously worked with Glendinning to design his current home in Round Pond, which he moved into about six years ago, and to design the condominium project he developed in Newcastle village, The Standard of Newcastle.

Cervera also developed The Harbor Room, the restaurant in New Harbor, and owns the property. Taylor Corson and Cerina Leeman own and operate the restaurant. He has a background as a developer and restaurateur in Charleston, S.C., Miami Beach, Fla., and Washington, D.C.

Work began on the new home at the end of 2016, starting with “the barn,” a two-car garage and guesthouse that would eventually be connected by a covered walkway to a main house.

“It was more than just trying to get two buildings to be the same height. You also had to incorporate how much height you’re going to have off of the front deck. There was a lot to consider when trying to figure out the elevations of everything,” Leeman said. “It was good to work with (people) that (were) accepting of different ideas.”

The project utilized local businesses for each step, such as materials, plumbing, electrical work, landscaping, surveying, flooring, and painting.

Cervera said his favorite feature of the home, which was designed to have a “contemporary farmhouse” feel, is the 30-foot-high ceilings in the great room at the center of the home.

“I wanted that voluminous feeling when you come in,” Cervera said.

Lofty ceilings are seen throughout the home. The ceiling in the master bathroom is 20 feet high.

Cervera said he loves the location, right in the village, and the view of the water.

“The placement of the house had to be very specific for the best view,” he said.

The main house has three bedrooms and 2 1/2 baths, a game room, and walk-in closets.

The connected two-car garage and guesthouse has one bedroom, a guest loft accessible by ladder, a kitchen, a full bathroom, and a gym.

“What people comment to me about all the time (is), they love the catwalk that connects the two buildings. That’s a big feature,” Cervera said.

French doors from each bedroom in the main house and the great room lead to a back deck overlooking the water, where there will be an outdoor kitchen area.

There is no Sheetrock in the house except for in the basement.

“I did not want to spare any expense on the quality of the materials (or) the craftsmanship,” Cervera said. “Everything from 8-foot custom mahogany front doors to very high-end windows to flooring to audio-visual systems, lighting systems, appliances, finishes.”

The home is bright, with many windows and light-colored paint and tiles, and has central air conditioning and heat.

The home was completed about a month ago, however, it still needs to be furnished.

Cervera said he hasn’t decided if he will make the new home his permanent residence.

Glendinning said Maine Home + Design contacted him and asked if he had any projects he would like to submit for the possibility of being featured. Glendinning sent five photos of the home, which was chosen.

“What I love about this place is the privacy,” Glendinning said. “When you get into this little courtyard out here, you’re in the village but you’re kind of set back from the road.”

“It’s got some clean lines on the exterior,” Leeman said. “Simple but striking lines. That’s the first thing I see when I come up the hill.”

“This is like my generation’s historic home for the future,” Leeman said.

Leeman said that due to the design, location, and craftsmanship, he believes his future grandchildren will consider it a “historic home of Round Pond.”

(Clarification: An earlier version of this article on the front page of the Nov. 29 print edition reported that Xavier Cervera developed and owns The Harbor Room. Cervera owns the building and property, but does not own or operate the restaurant business.)