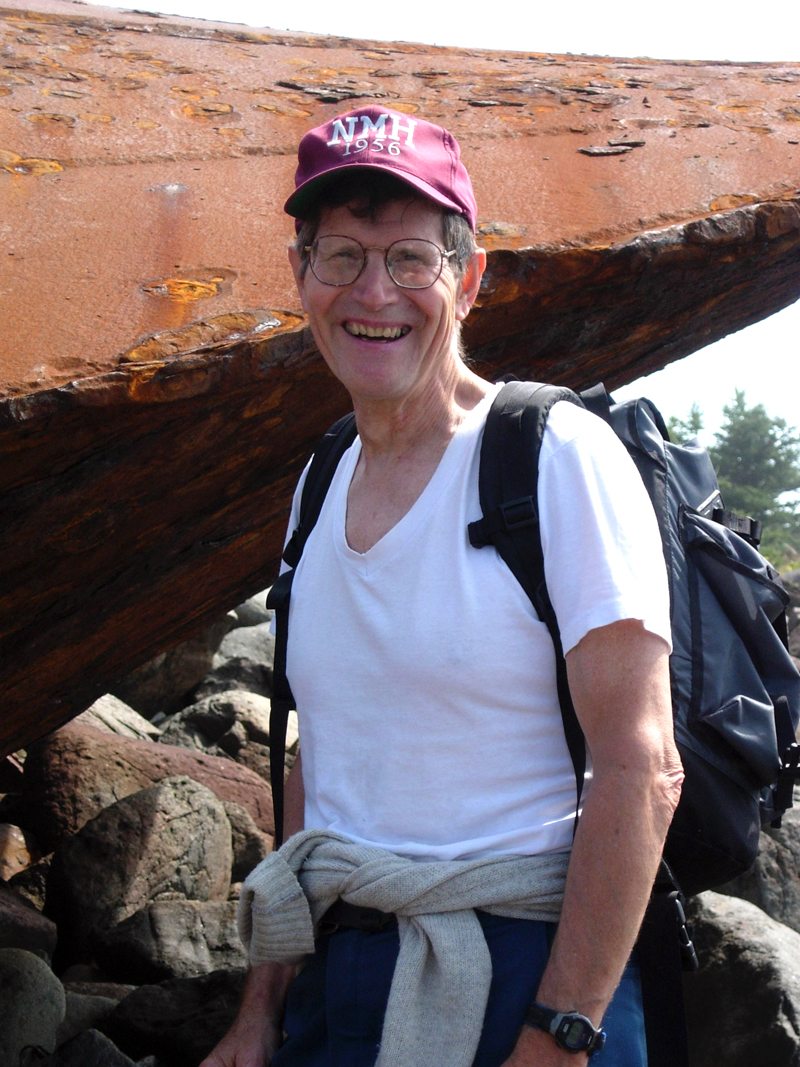 Richard Chutter during a trip to Monhegan Island. The Round Pond resident recently obtained a patent for his design of a high-performing sailboat. (Photo courtesy Lindsay Coats)

Two of Richard Chutter’s biggest passions in life are sailing and inventing. After combining the two and successfully applying for a patent, Chutter hopes to find someone to help him complete a prototype of his design for a high-performing sailboat.

A native of Massachusetts, Chutter had been coming to Maine with his family “since before I was born,” he said. His family spent almost every summer in New Harbor, during which Chutter would spend many hours sailing out of the harbor on the family’s 12-foot fiberglass sailboat.

His sister, Cynthia Kahn, remembers one instance in which a teenage Chutter went out sailing one windy day. As the sun was setting and their parents were starting to grow worried, Chutter appeared on the horizon.

“He was always adventurous,” Kahn said. “It turned out he had sailed all the way to Port Clyde, and had no idea where he was. He ended up having to ask someone where he was, so he could figure out how to get home.”

Chutter went on to attend Rensselaer Polytechnic Institute in Troy, N.Y., and graduated in 1960 with a Bachelor of Science in engineering. He has applied his engineering knowledge toward his hobby as an inventor.

His pursuit of the unusual led him into various career paths. After serving in the U.S. Navy, Chutter worked for Texas Instruments, General Electric, and the U.S. Department of Transportation as a project manager.

One of Chutter’s responsibilities with the DOT was managing the restoration of murals in post offices around the country. During the Depression, the Procurement Division of the U.S. Department of the Treasury commissioned artists to paint scenes of America in public buildings to boost morale.

“It was a unique project that stretched my expertise,” Chutter said. “It was fascinating to see the before and after of these paintings with the restorations.”

Chutter’s work brought him across the country, but he always had a special place in his heart for the time he spent visiting and sailing out of New Harbor. After retiring, Chutter bought property in Round Pond in 2000, where he has lived ever since.

In the past few years, Chutter has tackled a new project regarding how to make a faster sailboat. Chutter said the idea came to him while he was watching a fishing boat cut through the water. 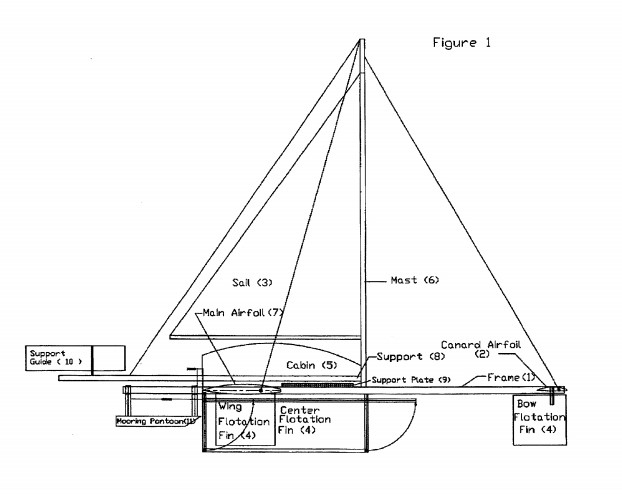 A side view of the sailboat design patented by Round Pond resident Richard Chutter.

“It looked as if it was going about 25 mph, but it’s powered by 100-200 horsepower,” Chutter said. “It got me thinking about how we could improve the efficiency of the boat, essentially making the sailboat more like an airplane, in effect by lifting the boat above the water and removing the drag of the water.”

While the concept could apply to “everything that moves over water,” Chutter limited his idea to sailboats and filed for the patent in June 2016. Since then, he has been working with individuals at SCORE, a nonprofit association supported by the U.S. Small Business Administration, to help the design become a reality.

In November 2016, Chutter was diagnosed with advanced prostate cancer. He is currently living in Hillsborough, N.H., near his daughter, Lindsay Coats, and is in rehabilitation after the cancer affected his ability to walk, he said. He has since re-learned how to walk using a walker, and soon hopes to walk without one.

While he continues his rehabilitation, Chutter is looking forward to the day a full prototype is made based on his design.

In order to fully demonstrate the capabilities of the design, Chutter said a full-scale model will have to be built. He hopes to connect with someone with America’s Cup, an annual sailing match that attracts the world’s best sailors and yacht designers. Founded in 1851, it is the oldest trophy in international sports and yachting’s biggest prize.

“I’m without pain right now, which is a big thing, and I’m very pleased about the progress,” Chutter said. “It’s a major step forward in determining my rehabilitation and it’s what’s driving me to keep going.”