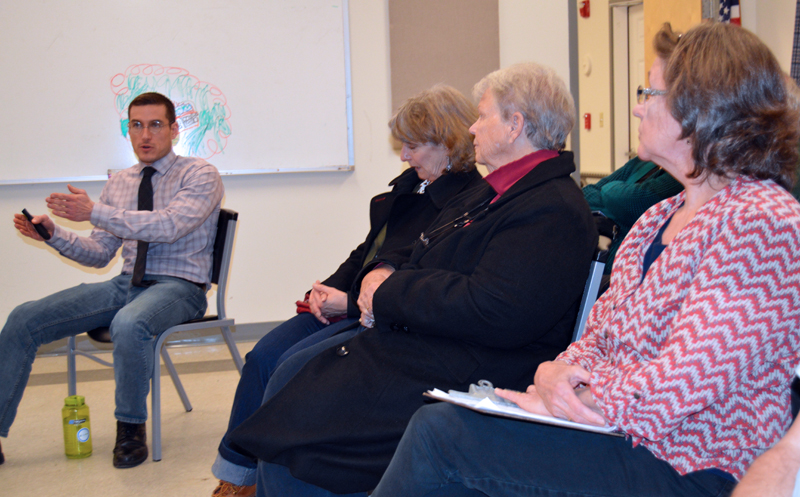 RSU 12 Board of Directors member Keith Marple, of Whitefield, speaks during a meeting at the Whitefield fire station Friday, Feb. 9. The purpose of the meeting was to discuss the possibility of Whitefield’s withdrawal from RSU 12. (Greg Foster photo)

Keith Marple, a Whitefield representative to the Sheepscot Valley Regional School Unit Board of Directors who is advocating for the town to withdraw from the RSU, presented alternatives to the RSU and recruited volunteers during a meeting at the Whitefield fire station Friday, Feb. 9.

Several Whitefield residents and parents of schoolchildren attended the meeting.

Marple’s calls for withdrawal have followed a series of public meetings in which parents have complained of bullying and other issues at Whitefield Elementary School, and of the school administration’s inadequate response to the issues.

Marple is the chair of a committee leading the charge for withdrawal.

The main reason for discontent with the current status concerns a “lack of accountability,” he said.

“Citizens have (few) options besides going through the chain of command,” he said.

Marple urged attendees who favor withdrawal to volunteer to collect signatures on a withdrawal petition.

“This is a decision the town has to make,” he said.

After a PowerPoint presentation, Marple opened the floor for comments from those present. Many expressed support for withdrawal, but had questions.

One or two others voiced some skepticism or caution, including Anthony Anderson.

“I’ve heard a lot of opinions but I’m not sure of facts,” Anderson said. He said his exposure to the RSU 12 at a meeting the previous evening gave him a favorable outlook toward the district.

A male attendee said he fears “going down this rabbit hole” and said teachers might leave. He suggested devoting energy to making the district’s plans for resolution of the current problems work.

Marple bolstered his arguments with facts and figures about test scores, which have dropped since Whitefield joined RSU 12. He also pointed to enrollment figures, which have declined from 293 to the present 182. At the recent meetings, several parents said they removed their children from Whitefield Elementary due to the issues there.

Several residents have attempted to volunteer at the school, but the school did not respond, according to Marple. “There has to be that open door,” he said.

Marple gave three options should the town favor withdrawal. One of the options would restore the local school board and allow the town to decide its own school budget.

A second option would be to join an alternative organizational structure, such as AOS 93, to which neighboring Jefferson belongs. In an AOS, the town would have its own school board, but share the same superintendent, central office, and other services.

“It might be a good option, but how responsive is it going to be to the local citizens?” Marple said.

The third possibility would be to form a charter school, for which the town could receive tuition students. A variety of options exist for types of charter schools, which would give Whitefield some flexibility, in Marple’s opinion.

Marple said it is difficult to determine what the budget might be after withdrawal, but he believes it would be similar to the town’s share of the RSU 12 budget.

However, Wiscasset’s costs rose after withdrawal. Wiscasset now has its own school department.

The situation in Wiscasset concerned some attendees, but Marple said withdrawal negotiations would affect the town’s post-withdrawal education budget.

(Editor’s note: This article has been updated to correct the first name of a resident who spoke at the meeting. His name is Anthony Anderson, not Arthur Anderson. The Lincoln County News regrets the error.)