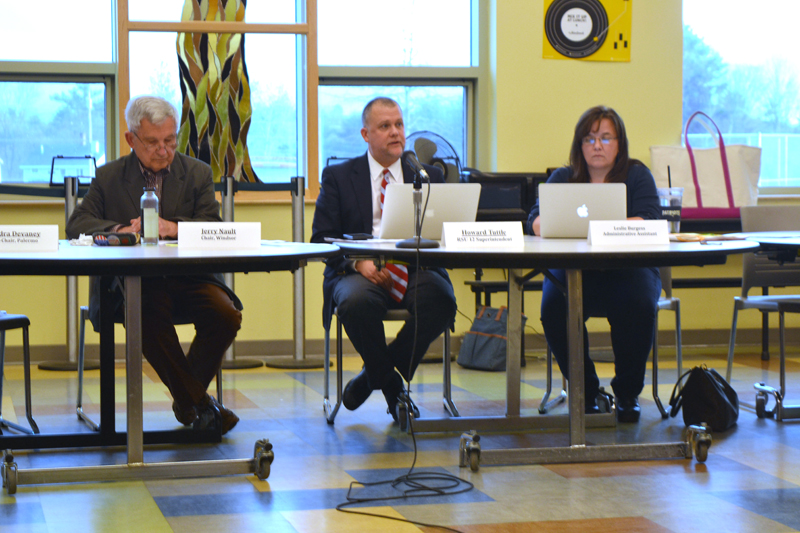 The town of Alna’s petition to amend the RSU 12 Reorganization Plan to restrict K-8 school choice will go to voters in the district’s seven towns June 12.

The Sheepscot Valley Regional School Unit Board of Directors passed the amendment after its second reading during a meeting at Chelsea Elementary School on Thursday, May 10. 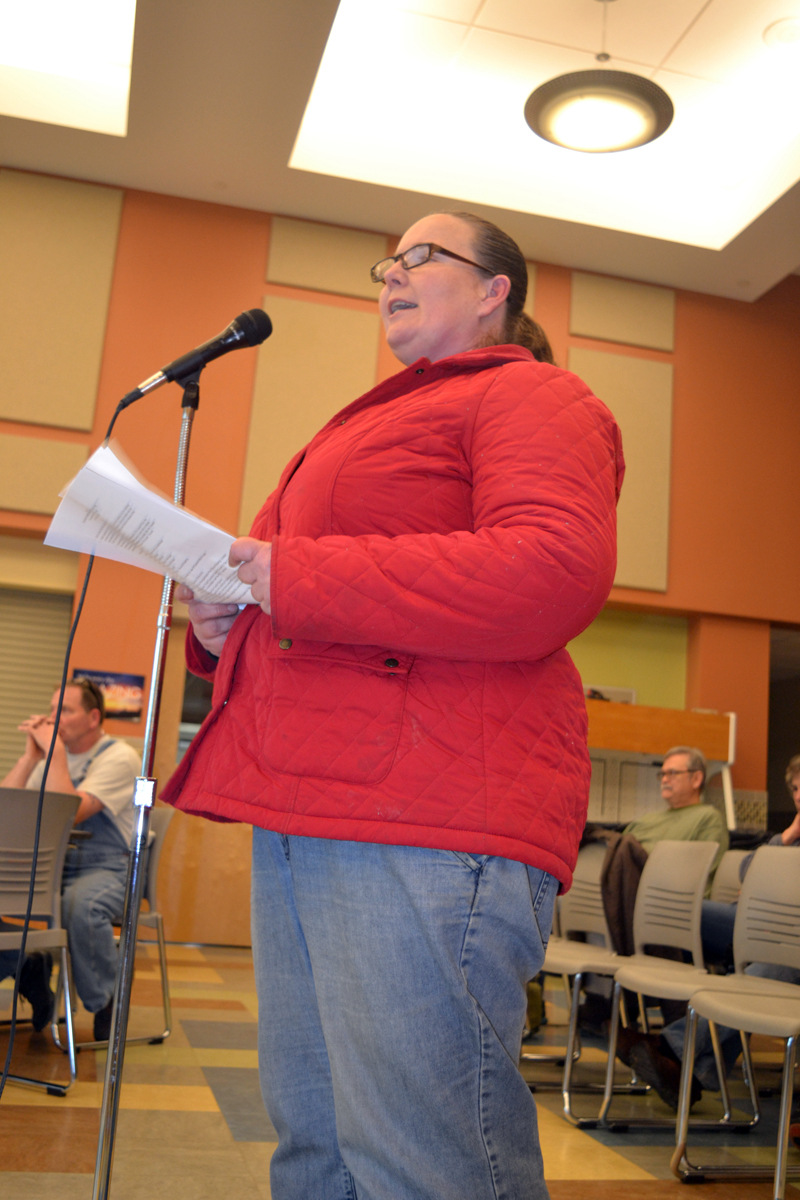 Ona Brazwell, of Alna, urges the RSU 12 Board of Directors to vote against Alna’s petition to amend the RSU 12 Reorganization Plan during a board meeting at Chelsea Elementary School on Thursday, May 10. (Christine LaPado-Breglia photo)

The vote came after four people, all residents of Alna, weighed in during the public-comment period – three in favor of the proposed amendment and one, Ona Brazwell, against. Brazwell, whose 7-year-old twins attend the Juniper Hill School for Place-Based Education in Alna, spoke of a “lack of diligence and research in drafting the petition.”

She said, “Why are we changing a policy that has worked in Alna for 20 years? Why such a rush? I urge you all to please take pause. I urge you to vote no tonight.”

“We’re a little town. We have no commercial tax base. We have one store … Little Alna can’t afford this,” Baston said, referring to the town’s current policy of funding private K-8 schooling for Alna residents.

“Please respect Alna’s choice,” Whitney said. “Please vote yes on the second reading and send it on to the voters.”

Prior to the May 10 meeting, Alna’s petition to amend the reorganization plan was reviewed by an ad hoc subcommittee of the RSU 12 board, which concluded that there is “no reason to believe the Alna petition would be harmful,” according to board member Christopher Johnson, of Somerville, who spoke on behalf of the subcommittee.

The district’s towns – Alna, Chelsea, Palermo, Somerville, Westport Island, Whitefield, and Windsor – will vote June 12. If the amendment passes, the change will apply to children who move to Alna after June 30.

Greg Im, a public-finance attorney at Drummond Woodsum in Portland, was tasked with helping develop the text for the June 12 ballot question.

There was some discussion about possible changes to the language of the ballot question, with Baston asking Im if there could be “the equivalent of the secretary of state’s summary” in the wording. 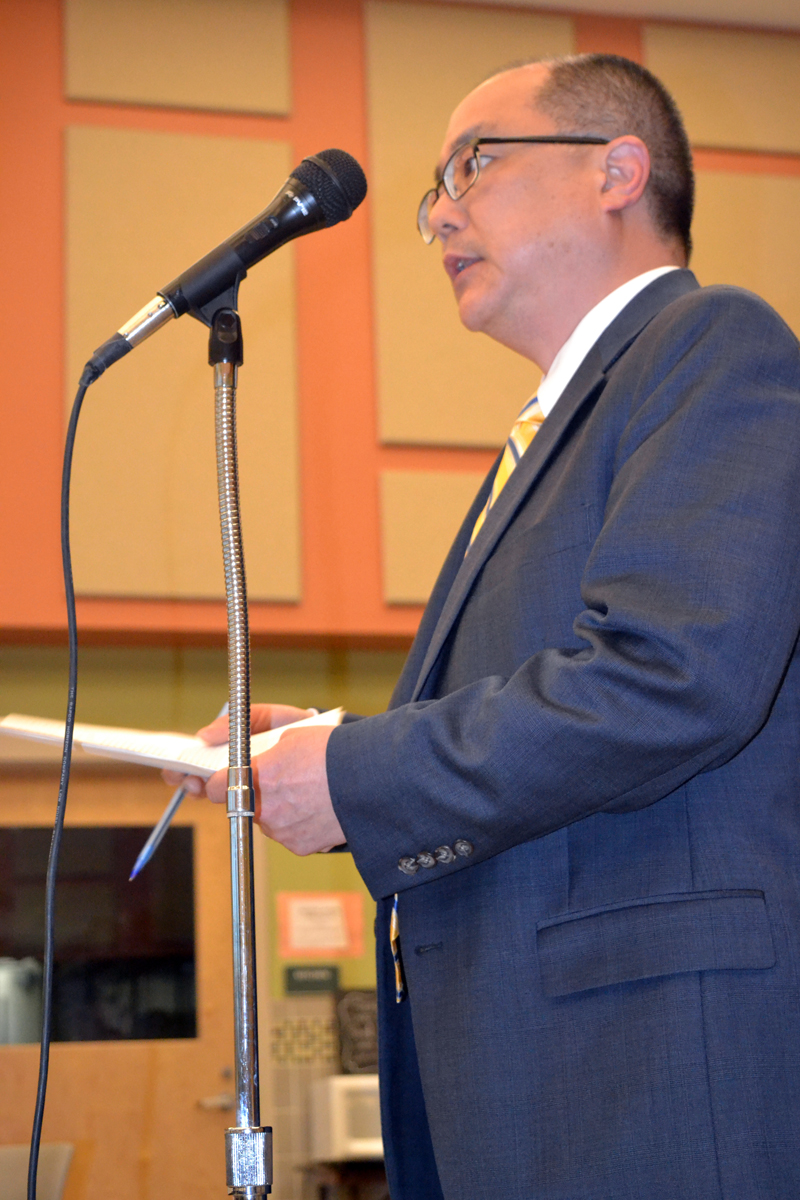 Portland attorney Greg Im discusses a ballot question concerning a proposal to amend the RSU 12 Reorganization Plan during an RSU 12 Board of Directors meeting at Chelsea Elementary School on Thursday, May 10. (Christine LaPado-Breglia photo)

“I tried to capture that in the second sentence,” said Im.

The exact wording of the ballot question was nailed down at the end of the meeting, after an executive session to discuss personnel.

The question reads: “Do you favor amending the Reorganization Plan for Sheepscot Valley Regional School Unit by inserting the underlined language shown below? This amendment, approved in concept by voters of the town of Alna at a March 23, 2018 non-binding referendum, would limit grades K-8 school choice to public schools for certain Alna resident students.”

These students will be able to attend an RSU 12 school or another public school, provided that “if the tuition payable to the choice school exceeds the Sheepscot Valley Regional School Unit tuition rate, the additional expense … shall be an additional local assessment to the responsible municipality. The municipality may then assess the parent(s) or guardian for the amount of tuition paid over the established tuition rate for the RSU, including the Insured Value Factor.”

In other business, it was announced that Amanda Mank resigned from her position at Whitefield Elementary School as an English language arts teacher for grades six through eight. RSU 12 Superintendent Howard Tuttle said the job opening would be posted the next day.

The board unanimously approved the formation of the Sheepscot Regional Service Center. “This action still needs to be approved by voters at the regional budget meeting on May 17,” Tuttle said after the meeting.

“This service center approval will allow RSU 12 to continue to participate and enroll students in the behavior program, which is part of the Sheepscot Regional Service Center, as well as participate in cost-sharing initiatives such as bulk ordering of supplies and collaboration around professional development,” Tuttle said. “This is an exciting opportunity to improve the quality of programming for our students while also working efficiently with the other districts who are part of this service center.”

RSU 12’s annual budget meeting will take place at 6:30 p.m., Thursday, May 17 in the gymnasium of Chelsea Elementary School, 566 Togus Road, Chelsea. District voters will consider the budget in an open meeting. If they approve it, it will go to a budget validation referendum June 12.