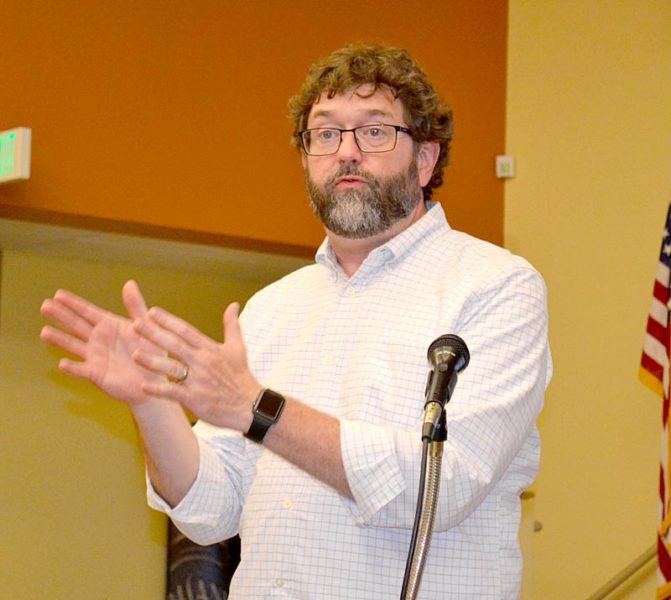 The RSU 12 Board of Directors requested a meeting with a Maine Learning Technology Initiative representative in May to discuss a dramatic shift the state was asking for in the district’s technology plan, said Deb Taylor, RSU 12 director of curriculum and technology. When news emerged that the Maine Learning Technology Initiative’s future was in question, the meeting “felt more urgent,” Taylor said.

In a meeting with the RSU 12 Board of Directors on Thursday, Oct. 13, Maine Learning Technology Initiative Policy Director Mike Muir described how the technology initiative, in order to survive, is evolving its focus from providing students with electronic devices to using those devices in purposeful ways.

“In early July, MLTI was dead and buried,” Muir said. The program, initiated in 2002 under then-Gov. Angus King to provide every seventh- and eighth-grade student with a laptop came under fire from Gov. Paul LePage as the state was renegotiating its contract with Apple Corp., according to the Bangor Daily News.

The program will remain in place for another four years, Muir said. However, the governor has asked for the program to show its effectiveness through test scores.

“There’s the impression MLTI is just some industry buy,” Muir said, and technology in education has been stuck on word processing, presentations, and online research.

The program is now emphasizing the role technology can play in increasing student performance in academic subjects, contributing to student engagement and motivation, and increasing not only the foundational knowledge of students, but the ability of students to apply that knowledge, Muir said.

The shift in focus from technology hardware, such as devices, to student learning is also reflected in the technology plan required of districts by the Maine Department of Education.

Taylor has said the Maine Department of Education initially told her, when she inquired in April, that the district’s technology plan, which was due to expire at the end June, would not need to be updated.

In May, the RSU 12 Board of Directors voted to replace the electronic devices for its seventh- and eighth-grade students for the 2016-2017 school year. The devices are provided through participation in the Maine Learning Technology Initiative. “We rely on MLTI a lot for our tech infrastructure,” Taylor said.

RSU 12 Superintendent Howard Tuttle questioned the future of the initiative. Tuttle said he was under the impression the program was created from surplus and “was in a safe space,” so it could not be eliminated. If school districts were aware the program could “come and go,” it would have impacted their decisions on whether to buy into it, Tuttle said.

If the program were to disappear, it would have budget implications for the district, Tuttle said.

According to Muir, the Maine Learning Technology Initiative became a line item in the state budget in 2006, and, like most line items, can be cut.

“Almost anything can go away,” Muir said.

Tuttle asked if there was anything RSU 12 or community members could do to help ensure the future stability of the Maine Learning Technology Initiative. “Make great things happen in the classroom,” Muir said.