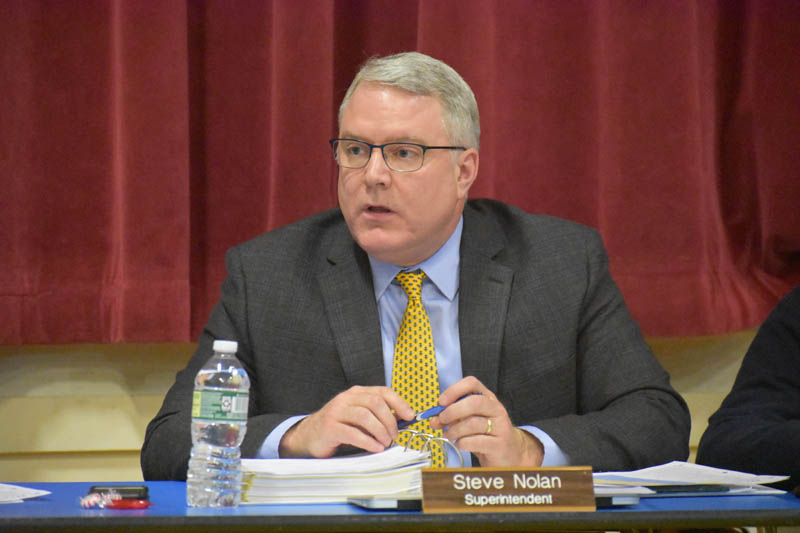 The RSU 40 Budget Committee approved a 2019-2020 budget with a 5.7 percent increase during a meeting at Prescott Memorial School in Washington on Monday, March 25.

The budget committee voted to add $193,889 for maintenance projects to the budget, bringing the percentage of the increase from 5 to 5.7 percent.

Sara Andrews, a member of the RSU 40 Board of Directors from Warren, made the motion to include the maintenance projects in the budget.

The budget will now go before the full RSU 40 Board of Directors, then to voters in the school district’s five towns.

The budget committee voted by a margin of 11-2, with the two votes in opposition cast by Curt Andrick, of Warren, and Melvin Williams, of Waldoboro. The committee has the same membership as the full board.

Before the vote, budget committee Chair Errol Silvestri, of Friendship, opined on his town’s support for the budgetary process over the years, mentioning that when he first got on the school board, his selectmen urged him to do what it takes to keep the town’s school open.

“I know we all feel the pain, but we have to support good schools,” Silvestri said.

The meeting followed previous meetings on the budget at Miller School in Waldoboro on March 11 and at Friendship Village School on March 18.

According to board documents regarding changes in town assessments, Waldoboro will face a 2.63 percent increase in its contribution to the budget. Waldoboro will pay $6,056,614, an increase of $155,344.

A $25,000 wireless upgrade at Medomak Valley High School and an increase in substitute pay from $75 to $90 per day with $100 for experienced substitutes are also part of this year’s budget, according to the summary.

The district’s special education costs were discussed at length.

“I question how badly we really need them. We can’t just keep asking taxpayers to pay more and more and more,” Andrews said.

“The proposals we are asking for are due to the students coming in. The numbers are increasing and the needs are getting more and more intense. I think all the principals will agree with that,” Brackett said.

Matthew Speno, a board member from Union, spoke in favor of funding the resources necessary to provide special education services in the district.

“If it’s not in the budget, we will have to hire people willy-nilly versus hiring top-notch talent. I get it’s a lot of money and it hurts, but we are going to shoot ourselves in the foot if we don’t do it,” Speno said.

Andrick said he had hoped to vote on a flat budget this year, as last year’s budget hit some of the district’s towns particularly hard.

“We had a 13 percent increase in Warren last year. I was hoping for a flat to 3 percent budget, but I don’t see that happening,” Andrick said.

Regarding special education enrollment, Brackett said the district currently has 430 students, up from last year’s figure of about 420.

Andrick asked if the board could approve the five ed techs during the course of the year on an as-needed basis.

According to RSU 40 Superintendent Steve Nolan, there is a hiring season when school districts are able to find the most qualified candidates.

“It does get harder to find people and the quality of the applicant pool does shrink over time,” Nolan said.

Nolan said the district’s budget reflects projected enrollment and there is no way to know the exact number of students who will be in the district on the first day of school.

“If there are students here with needs, we are obligated to fill positions,” Nolan said.

Erik Amundsen, a board member from Union, spoke on the budget increase last year and hopes to mitigate an increase this year.

“There was a huge increase last year. I was hoping we could stay status quo, but that is not what is being proposed. It’s just a big hit for people,” Amundsen said.