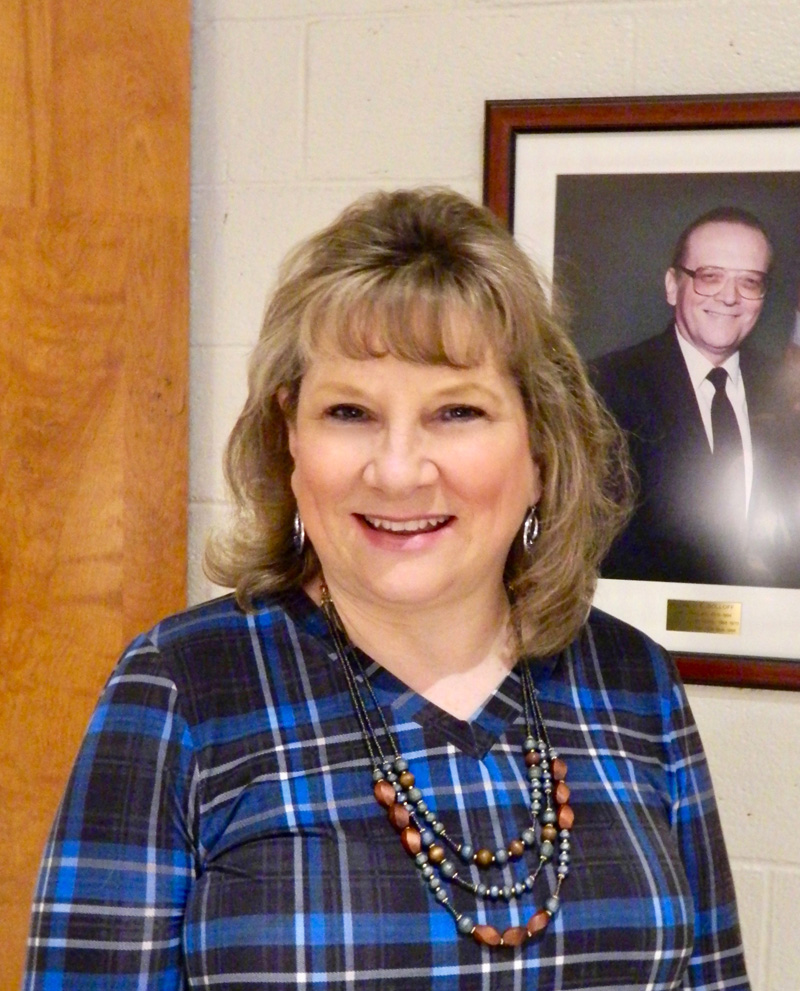 Linda Pease poses in front of a photo of her father, the late Ronald Dolloff, Medomak Valley High School principal from 1970-1994. Pease will begin the same job in July after six months in an acting role. (Photo courtesy Lisa Genthner Gunn)

Medomak Valley High School’s acting principal for the last six months will stay on to lead the school as its next principal.

The RSU 40 Board of Directors appointed Linda Pease principal Thursday, May 3.

She will remain acting principal until July, when she will take over as principal.

With the appointment, Pease will take over a job once held by her father. She is the daughter of the late Ronald Dolloff, MVHS principal from 1970 until his retirement in 1994.

“It is a great privilege to have been appointed to serve in the same capacity as my dad at the high school that, because of him, has always been an important part of my life,” Pease said in an email response to a request for comment.

Pease thanked the board for the appointment and said she looks forward to continuing to work with the school’s staff and students.

“I am committed to continuing to support the good work of the dedicated staff and to (expanding) our reach in making a difference in the lives of our students,” Pease said.

Pease said she is excited to settle into the new role moving forward.

“I value and honor the young people who walk through the doors of our school,” she said. “Surrounded by a diligent, knowledgeable, and caring administrative team, I am excited for this opportunity to move the school forward, while also recognizing the solid foundation that has already been established.”

The RSU 40 board named Pease acting principal for the remainder of the 2017-2018 school year in January, after the resignation of Principal Andrew Cavanaugh the previous month.

Pease became an assistant principal at MVHS in July 2015 and has been with the school district since fall 1985, when she went to work at Prescott Memorial School in Washington.

Pease started at MVHS in 2005, when she was the teacher and leader of the school’s freshman academy.

In addition to working throughout RSU 40, Pease spent three years at the Mid-Coast School of Technology in Rockland.

“Of the 33 years I’ve been teaching, 30 have been with the RSU. I’ve pretty much been here the whole time,” Pease said.