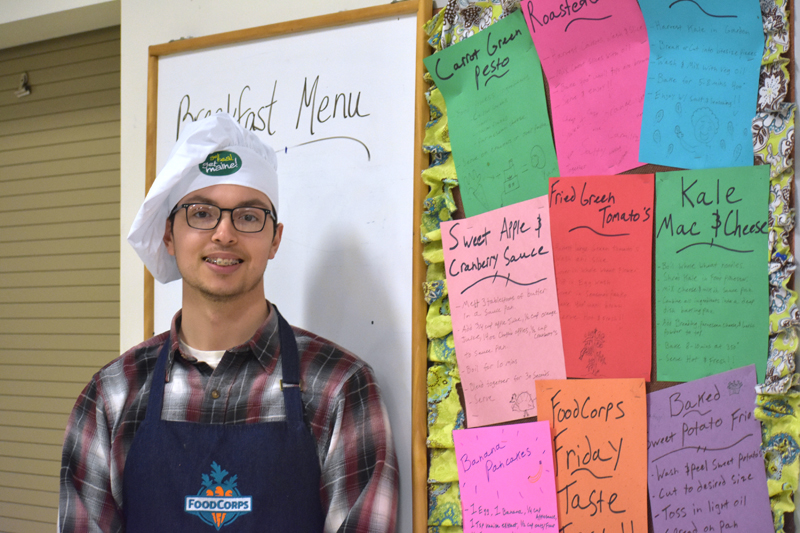 Students at Miller School and Medomak Middle School in Waldoboro are growing produce, learning about food and nutrition, and sampling meals made with healthy, local ingredients as part of the national FoodCorps program.

FoodCorps utilizes the cafeteria, classrooms, field trips, and outdoor activities to introduce students to healthy foods and foster their interest in nutrition.

A national service organization affiliated with AmeriCorps, FoodCorps connects kids to healthy food in school so they can lead healthier lives and reach their full potential, according to the nonprofit organization’s website.

A recent graduate from the University of Maine at Orono, Jared Grenier, is the FoodCorps service member at RSU 40. He is based in Waldoboro and spends his time at district schools, including Miller School and Medomak Middle School.

Grenier is a native of Albion and a graduate of Lawrence High School in Fairfield. After training in Portland, Ore., he returned to Maine and his two-year assignment to RSU 40.

Grenier’s inspiration to join FoodCorps came from his family. His mother is the executive director of Maine Agriculture in the Classroom, and he grew up on a farm and participated in 4-H. 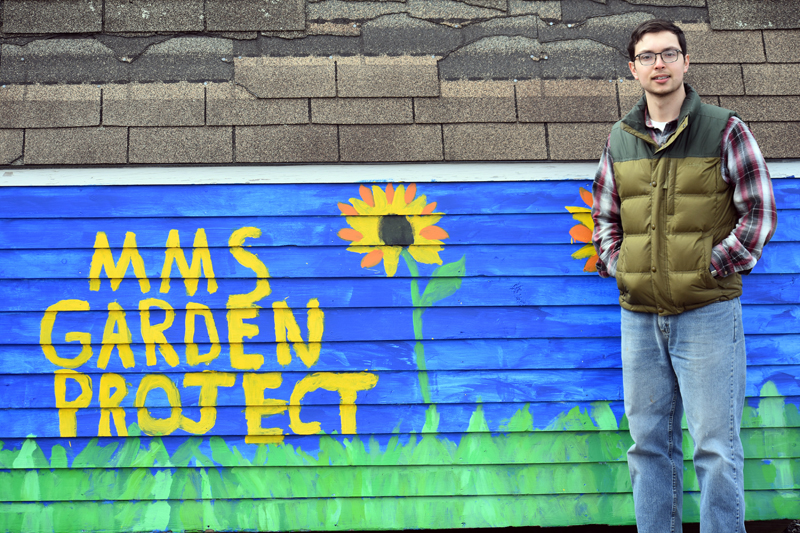 Grenier said the idea behind FoodCorps is to provide kids a connection to healthy food at an early age.

“We are trying to address kids’ connection to healthy food, hoping to establish good habits early on,” he said, quoting the organization’s co-founder, Cecily Upton.

Grenier started at RSU 40 in August 2017. He said FoodCorps’ motto is “try things” and students at Medomak Middle School have an opportunity to do so during FoodCorps Friday.

He described FoodCorps Friday, when he sets up a table in the school cafeteria, as a taste test where students have an opportunity to try new foods at lunch.

The students sample a variety of dishes and provide feedback on their taste. They indicate on posters whether they tried it, liked it, or loved it. The ingredients in each dish are posted.

The dishes for the taste test are prepared in the cafeteria. Grenier is ServSafe-certified and has students help prepare items like guacamole.

“It gets the kids involved and excited when they get to take part in the process,” he said.

A variety of ingredients go into the dishes, including items grown on site in a raised-bed garden tended by students, where the kids have an opportunity to learn gardening techniques and get their hands dirty. 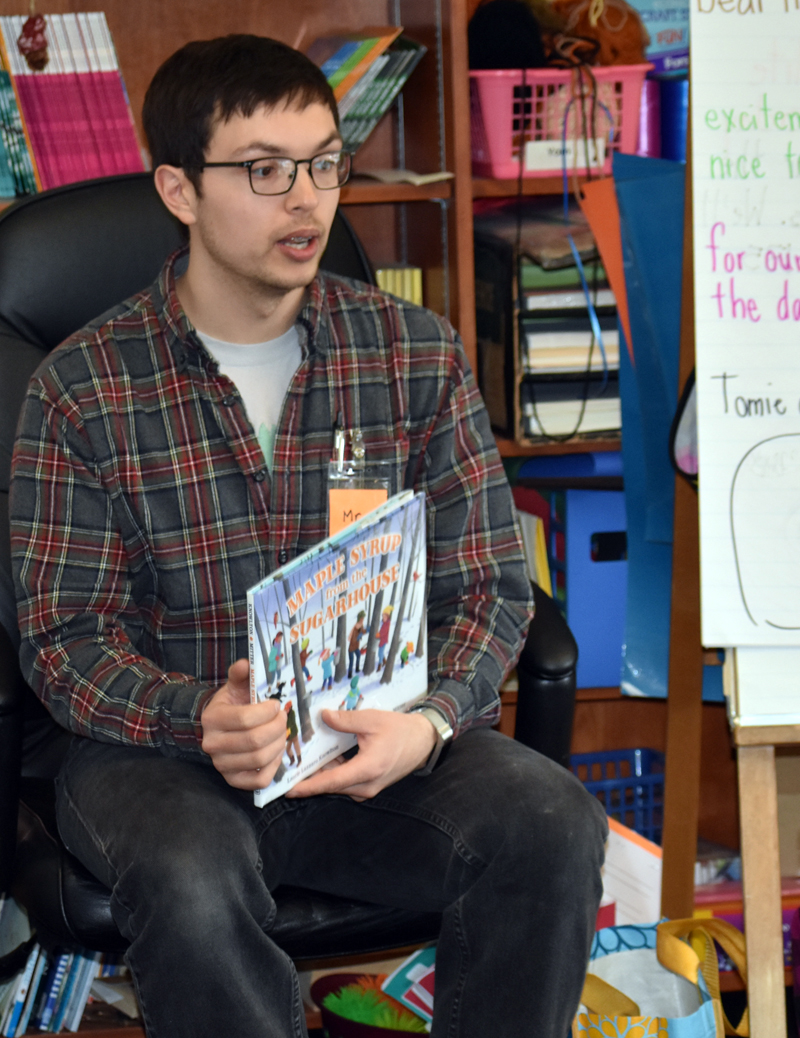 The garden and a nearby storage shed to house tools were set up in spring 2016 by the district’s previous FoodCorps service member, Alexis Zimba-Kirby, according to Grenier.

Grenier said the gardens are currently focused on growing garlic, but a greenhouse will soon be completed. The greenhouse will allow students to grow more items, start earlier in the year, extend the growing season further into the fall, and add crops suited to warmer climates, such as peppers and tomatoes, while protecting the produce from wildlife.

Carrots planted last year ran into trouble with a vole, but other produce grown in the raised-bed garden has included beets, broccoli, Brussels sprouts, squash, strawberries, and Swiss chard, according to Grenier.

“The students meet once a week with the main goal of getting outside and doing projects in the garden,” Grenier said.

Grenier said five to six students take part in club activities during the winter, and about 10-14 in the warmer months.

The Outsiders Club is an after-school program that gets kids outside and gives them an opportunity to learn sustainable gardening practices, tend the garden, and raise vegetables from seeds to the finished product served on FoodCorps Fridays.

Club members are not the only students who contribute to the garden. All the school’s students have “fresh air” time, in which they can come to the garden and help out, performing tasks such as looking for hornworms.

The sustainable nature of the school’s on-site garden is furthered by a composting program run at the school which helps turn waste into a resource to be used in the garden.

“The compost is turned over and used in the garden. It’s a sustainable source that keeps the process going. We use the waste from food to make usable products to make more food,” Grenier said.

On April 6, Grenier visited Miller School, where he taught second-graders about maple syrup. The recent celebration of Maine Maple Sunday, on March 25, tied in well with the day’s lesson.

As part of the lesson, Grenier read a book on the subject, led the students in a singalong, and had a taste test in which the students had a chance to learn the difference between artificial and real maple syrup. 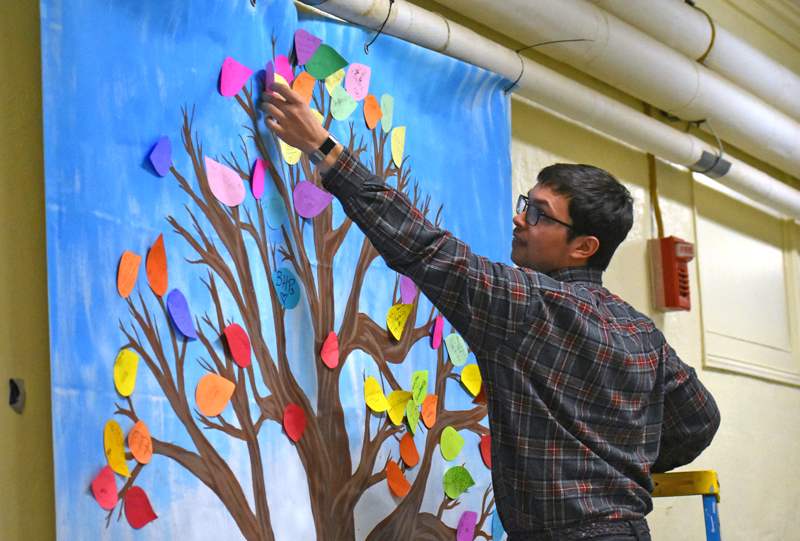 FoodCorps service member Jared Grenier helps a student place a leaf on the gratitude tree in the hallway of Miller School in Waldoboro. (Alexander Violo photo)

In addition to the maple syrup-themed aspects of the afternoon, students took time to write what they were thankful for on colorful paper leaves, which Grenier helped the children place on a “gratitude tree,” a poster in the hallway of the elementary school.

Grenier said the poster was painted by the Maine School Garden Network.

Over the course of the year, Grenier said he interacts with over 350 students in the school district.

In addition to his work as a service member in the classroom and in the garden at Medomak Middle School, Grenier also takes part in field trips.

Destinations this year have included Tim’s Sugar Shack in North Whitefield; Hidden Valley Nature Center in Jefferson, for snowshoeing; and the Lincolnville shore, to gather seaweed for the middle school’s garden.

Grenier said he is looking forward to his second year in RSU 40 and to an upcoming yearly training in Oregon.

He said his favorite part of the experience is working with the community and the kindred spirit of service members in FoodCorps locations throughout Maine.

“We write to each other and talk about what we are doing well, where we need to do things different. The community and FoodCorps in general has so much gratitude,” Grenier said.