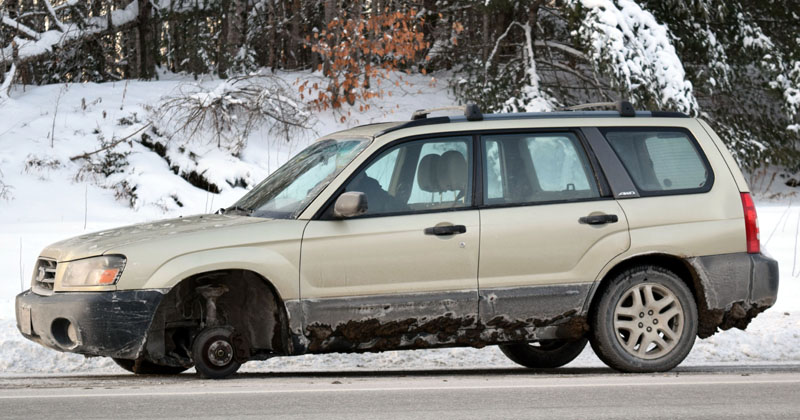 A 2003 Subaru Forester lost its front driver’s side wheel while southbound on Route 1 in Nobleboro the afternoon of Wednesday, Dec. 27. The wheel struck and damaged two other vehicles. (J.W. Oliver photo)

A wheel separated from a station wagon southbound on Route 1 in Nobleboro the afternoon of Wednesday, Dec. 27, striking and damaging two other vehicles.

There were no injuries, according to Lincoln County Sheriff’s Deputy Kevin Dennison. A tow truck removed the station wagon and a pickup truck, while a sedan sustained less severe damage.

Stephen J. Tracey, 53, of Union, was driving a 2003 Subaru Forester station wagon south on Route 1, just north of the Damariscotta town line, when the wheel separated from the vehicle, according to Dennison.

The pickup truck sustained extensive front-end damage, according to Dennison. The Toyota sustained damage to its bumper and was leaking windshield-washer fluid, but did not require a tow.

All three drivers were wearing seat belts. None of the vehicles’ airbags deployed.