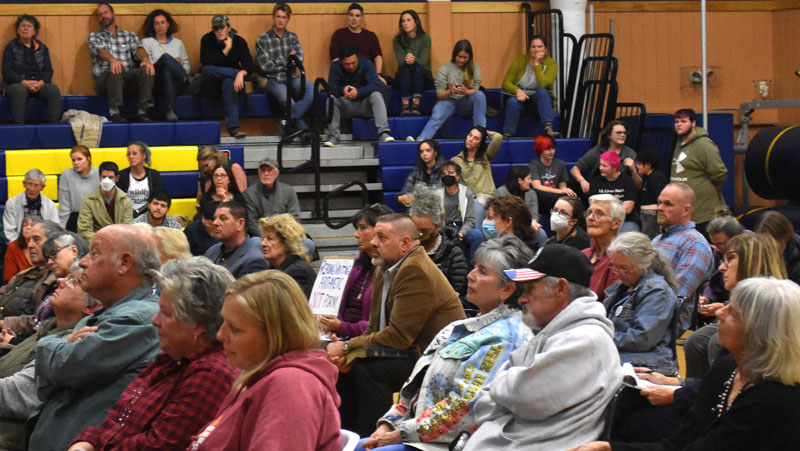 Audience members in the Medomak Middle School gymnasium listen to public comment about the proposed removal of “Gender Queer: A Memoir” from the high school’s library. Over 250 attendees appeared at the meeting in person and by video. (Elizabeth Walztoni photo)

At an emotional meeting that ran over four hours, the RSU 40 Board of Directors voted Thursday, Oct. 20 to keep the memoir “Gender Queer” in the Medomak Valley High School library.

Eleven of the members voted in favor of upholding the Citizen’s Challenge Committee’s finding and keep the book in the library while four voted against, or 661-284, using the board’s population-based voting formula.

The memoir’s presence in the library collection was originally challenged by Dwayne Miller, of Nobleboro, in October 2021. The board’s May 2021 decision to keep it was appealed by Steve Karp, of Waldoboro, in June 2022. Both challenges were filed over concerns of “grooming” and “pedophilia” resulting from students reading “explicit sexual content in text and graphic form.” Karp’s complaint flagged three pages of sexually explicit illustrations in particular.

A crowd of over 200, along with 73 watching remotely, gathered in the Medomak Middle School gymnasium for an audience with the board before its vote.

“Gender Queer,” a comic book by Maia Kobabe chronicling the author’s journey discovering sexual and gender identity in young adulthood, entered the MVHS library in late January 2020. Its presence in school libraries has polarized communities across the state, coming to vote in Buxton and Dixfield this year.

The board has been following the district’s selection of educational materials policy throughout the challenges, RSU 40 Superintendent Steve Nolan said in an opening address to the crowd. Nolan appointed a Citizen’s Challenge Committee to review the first complaint. That committee ended after their recommendation to keep the book was made in January 2022. The board’s vote on Oct. 20 addressed whether to uphold their decision.

Nolan said that the book is not required reading or part of any class curriculum at MVHS. Parents can request their child be restricted from checking out the book.

After a short address from Nolan describing the materials reviewed by the board and guidelines for attendee comments, the meeting was opened to an audience with the public. Forty-three parents, grandparents, students, and neighbors spoke with a time limit of three minutes. Discussion was respectful and civil, said Waldoboro Police Chief John Lash, who attended the meeting to provide security.

Audience members on both sides of the question expressed deep and personal fears for students; several left the microphone in tears.

Many made it clear that the vote represented much more to them than one book. Speakers framed the vote as a monumental decision for the district and said that either outcome would set RSU 40 on a new path.

Becca Shaw Glaser, of Rockland, speaking to keep “Gender Queer” in the library, said the board was in a position to determine the culture of the area.

Mike Kee, of Union, who spoke in favor of removing the book, said that “the board stands on a precipice tonight” and read from a Bible.

A number of those who wanted the book to remain in the library said that removing it could lead LGBTQ+ students to feel isolated or unaccepted and even to take their own lives. Several referenced youths who had committed suicide.

Speakers in favor of taking “Gender Queer” off the shelves said they were challenging the explicit content in the book, not its LGBTQ+ focus.

Neither of the original complaints filed with RSU 40 directly reference LGBTQ+ content. Both complaints list concerns of “pedophilia” and “grooming,” along with explicit sexual material. Karp’s filed complaint calls the book “pornography.”

“It should be obvious to anybody that this book is not for kids,” Karp’s wife Carmen said during the comment period. “It’s diabolical.”

Karp presented the board with a petition to remove the book from the library, which had circulated since early September and received over 1,000 signatures. Sage Cunningham, a transgender student at MVHS, created an online petition in early October asking the school to keep the book, which has received 785 signatures.

“Banning this book will erase a story that a transgender student such as myself could relate to,” Cunningham wrote in the petition.

Debate took place throughout the meeting over the definitions of both book banning and pornography.

Many of the book’s challengers disagreed with use of the word “ban” by other speakers, saying that they did not intend to stop anyone from reading the book on their own.

Defenders of “Gender Queer” pointed to definitions of pornography that include an “intent to arouse,” which they said the memoir does not contain.

Students came to the microphone to share that the contents of the book were nothing new to them.

“I could find worse on my phone in five minutes, and you let me have that in school,” said MVHS senior McKelvey Hunter.

Parents like Scott White, principal of Union Elementary School, admitted that some pictures and content in the book made them uncomfortable, but said they understood more of and felt more empathetic to the challenges faced by LGBTQ+ youth after reading. White and other speakers urged the board to consider the images in context.

Questions were raised by the audience and the board in later comments about whether it would be legal to remove the book under state and federal nondiscrimination acts.

The Maine Human Rights Act prohibits schools from discriminating against students based on their sexual orientation, a definition which includes gender identity, according to materials provided to the board by its legal counsel. Drummond Woodrum Attorneys of Portland advised the board.

Students and adults commented throughout that they felt discussion of the book to be a distraction from academic work. Kristin Sims, a teacher at MMS, said it was diversion from other challenges faced by the district, such as staffing shortages and student behavioral issues.

Sims said she did not believe those challenging the book represented the wider community. Paula Sutton, of Waldoboro, countered that “more people would be here tonight, but they’re afraid of being ‘canceled.’”

The gymnasium remained filled past 9 p.m. As public comment drew to a close, audience members began to depart, but some remained to see the vote through. At 9:30 p.m. the board passed a motion to extend the meeting “until we’re done.”

The board entered an hour-long private executive session after this motion to hear from their legal counsel. Board Chair Danny Jackson said no discussion took place between members during the session.

Upon return to the gymnasium at 10:30 p.m., several board members added their own comments.

Naomi Aho, of Warren, categorized the discussion as a distraction from academics, pointing to standardized test scores within the district, which she called “dismal.”

Randy Kassa, of Warren, said that the audience had misunderstood the challenges filed against the book.

“None of the commentary” at the meeting “is materially relevant. The motivation of the challenge is to remove vulgar material, not suppress ideas,” he said. “There’s no misunderstanding that it’s an explicit book.”

He said it would not be a violation of First Amendment rights or anti-discrimination policies to remove the book on the basis of explicit material.

Kassa also expressed concerns that younger children within RSU 40 might access the memoir through interlibrary loans. He questioned whether images in “Gender Queer” would be flagged by the school’s online content filters or violate the student handbook.

Jeannette Wheeler, of Waldoboro, said she felt concerned about impressionable minors reading the book. She suggested the book would put thoughts into student minds about sex and encourage reckless behavior.

Jackson said that the book’s removal would be a ban, based on his research of the word’s definition.

A motion to uphold the 2021 findings of the school Citizen’s Challenge Committee and keep the book in the library was made by Sandy O’Farrell, of Waldoboro, seconded, and passed in a public roll call vote of 661-284 using the board’s population-based voting formula. There were no abstentions.

Karp said that he will not pursue further action against the book, focusing instead on a second run for the RSU 40 board in June 2023. He ran for the first time in June of this year and was not elected. Karp said he plans to help other board candidates in the district run as well.

The meeting closed after approval of a teacher nomination for the MMS and approval of a first read for handbook policies at a future meeting.

The next RSU 40 board meeting will be held on Thursday, Nov. 3 at 7 p.m. in the district’s central offices at 1071 Heald Highway in Union.