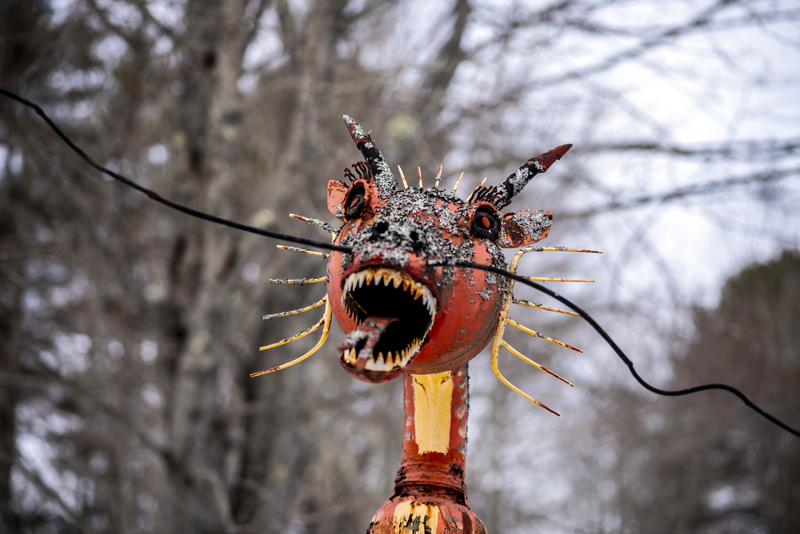 An orange cat leads the way, tail waving, through 5 acres of metal cast-offs that have been collected, conceived, cut, and concocted into a garden of fantastical figures on a piece of property on Bremen Road in Waldoboro.

Waldoboro artist Nate Nicholls died in 2014. Despite the best intentions and fervent hopes that his body of work will last, his garden is in danger.

Nate Nicholls was an outsider in Waldoboro. Daughter Alissa Geis said that for a long time he was treated as such. He came from away, moving to Maine from Massachusetts.

But Geis said that he became known around town over time, his battles with local government earning him a certain notoriety, a degree of begrudging respect.

And people began to notice the idiosyncratic creations in front of his home. His work began to appear around Waldoboro, on the steps of the Main Street barber, a decorative fence in front of the Tidemark Gallery.

After his death, Nate Nicholls’ work was featured on the “Today” show and representatives from several museums, including the Farnsworth and the Smithsonian, exhibited interest in parts of the 1,500-piece collection.

Charlotte Davenhill, a former president of the Tidemark Gallery, which has since closed, described Waldoboro at the time of Nate Nicholls’ death as “a pretty contentious place” before adding that “everyone seemed to come together around what he did out there.”

“People from every aspect of Waldoboro were excited about it and proud of Nate,” Davenhill said. “That didn’t exist when he was alive.”

The family rode the wave of interest in their father’s art. They talked to museums, including the Waldoborough Historical Society’s museum, about preserving the sculptures. They donated a large five-masted schooner crafted from sheets of recycled metal to the town. They looked for ways to preserve the collection as a whole.  But the efforts to save Nate Nicholls’ work have petered out.

According to his son Josh Nicholls, “dozens of people showed interest but there was no follow-through.” The five-masted schooner still sits in the driveway in front of the Nicholls house.

Jean Lawrence, president of the Waldoborough Historical Society, said the society agreed to take the schooner after the town did not. “We were so excited when we heard about the piece,” Lawrence said. “We would be happy to have any of his art.”

The family offered to deliver the heavy sculpture, but never did. Lawrence said the society still has space set aside for it.

Nate Nicholls lived on his own terms. “He raised us on a meager living, $10,000 to $12,000 a year for a family of seven, selling blueberries on the side of the road,” Josh Nicholls said.

Geis described their childhood as magical. There is a deep well of grief and love that bubbles up when his children talk about the father they lost more than six years ago.

According to Geis, he was a high school dropout who taught himself the things he wanted to learn. “Dad was so articulate,” Geis said. “He studied law — deeds and property issues. He was good at arguing with the town of Waldoboro.”

“He had quite an academic life,” Davenhill said. “He was very well read. He surprised people with that. It came out in his work.”

That work started with motorcycles, according to Josh Nicholls. At one point Nate Nicholls had about 20 behind the house in various stages of disrepair. “There were a lot of parts kicking around. The town got after him for running a junkyard.”

He responded by fabricating the nuts and bolts and discarded gas tanks into the art that became his obsession.

Nate Nicholls responded to tragedy and disruption in his life by diving deeper into that art. According to his children, his divorce and the death of his mother both had tremendous impact on him.

Josh Nicholls said his father began spending eight to 10 hours a day outside welding. Geis said that “the work took on a different style with more detail. He spent more effort to make the pieces fit and paid more attention to the shapes suggested by the tools he repurposed in his work.”

According to Geis, the art became who he was. “It took over his life at the end. It was more of a burden than a blessing. He felt responsible to the artwork. He couldn’t pick up and go.” She worries that her brother is similarly burdened.

Josh Nicholls is buying his sisters’ shares of the house. He wants to turn the property into a park, a public place. But he feels stuck, already working full time to support his family. “I want it to be seen, but I can’t take on the financial burden. I don’t know what to do. It gets overwhelming.”

Still, he likes to see the kids coming through in summer when all the flowers are blooming. In the past there were weddings and parties held among the dragons and dinosaurs.

“It’s hard now to make it look good,” he said. The family hosted a gathering last year, 40-50 people spread out on the property with cans of paint in an effort to protect the art. They hope to do it again.

“People walk through five or six times and see things they haven’t noticed before,” Josh Nicholls said. “People return year after year. It’s like ‘Where’s Waldo’ or ‘Seek and Find.’”

Near the end of his life, Nate Nicholls started to become more established as an artist, earning commissions for his work. He had a successful show at Tidemark Gallery.

“I wonder if we couldn’t do more as a community to connect with what he was doing,” Davenhill said. “His memory and legacy are still very strong.”

“Waldoboro has changed. It’s become a place friendly to artists,” she said. “It would take a level of dedication and organization to work on Nate’s sculpture field, but I’m sure there’s a way to do it.”

The family made plans last year to sell off some of the repetitive pieces and use the money to try to keep the garden going. But, as it did with so many things, COVID-19 interfered.

Geis said she would love to see the collection preserved as a Waldoboro landmark, but she feels that the family is getting closer to letting go.