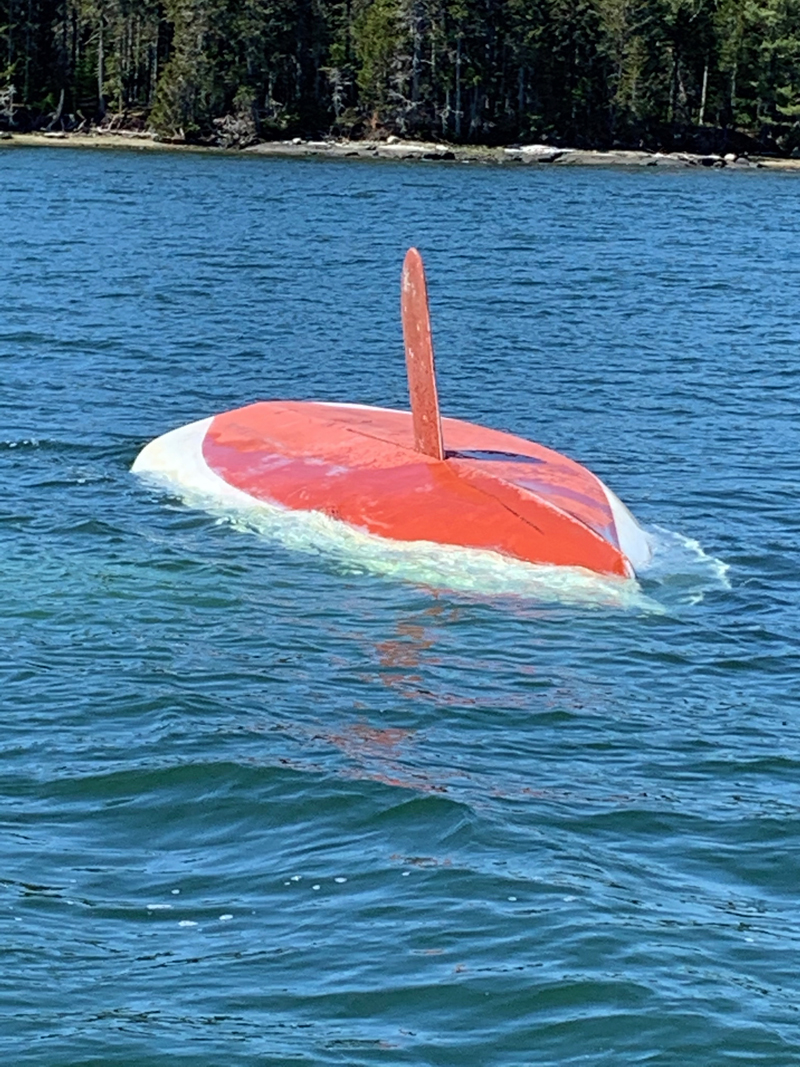 A capsized sailboat drifts in Back Cove, Waldoboro, Tuesday, May 19. The Waldoboro man on board climbed onto the bottom of the boat and held on until Friendship firefighters picked him up. (Photo courtesy U.S. Coast Guard)

The Friendship Fire Department picked up a Waldoboro sailor and brought him ashore after his sailboat capsized near his Back Cove home Tuesday, May 19.

Clyde Blackwell, 65, launched his new 17-foot boat from his home at 8:30 a.m. and was sailing between his home and Hungry Island when a gust of wind caught the boat and caused it to overturn, according to a press release from the Maine Marine Patrol.

Blackwell was in the water for a short time before he was able to pull himself on top of the capsized boat and hold onto the keel until help arrived about 15 minutes later. He yelled for help to a resident on shore, who reported the incident.

The Friendship Fire Department was dispatched to launch its boat from a nearby point in Friendship, according to Waldoboro Fire Chief Paul Smeltzer. The boat brought Blackwell to shore, where he warmed up in a Marine Patrol vehicle.

“They wrapped him up in blankets and were able to warm him up,” Smeltzer said.

Blackwell was wearing multiple layers, which likely prevented hypothermia from the brief immersion, according to the press release.

“However, for smaller sailboats and paddle craft, we do recommend a wetsuit or a dry suit at this time of the year when, despite warm air temperatures, water temperatures can be cold enough to cause hypothermia very quickly,” Maine Marine Patrol Sgt. Johnathan Luellen said.

“We know that the temperatures this week will start to rise and people will want to get out on the water, so we urge caution, especially since water temperatures will still be very cold,” Luellen said.

Blackwell was wearing a life jacket when he got underway, but removed it at some point.

“I cannot stress enough the importance of wearing a life jacket at all times while you are out on the water,” said Chief Adam Smart, officer in charge at U.S. Coast Guard Station Boothbay Harbor. “We are extremely fortunate there was no loss of life, but the reality is that anyone not wearing a life jacket drastically reduces their likelihood to survive.”

“Thanks to the quick efforts of our partnering agencies, this case had a positive outcome,” Smart said. “With ocean temperatures still holding below 50 degrees, the cold water can quickly incapacitate a person and make it impossible to tread water while waiting for help.”

Smeltzer said all responding agencies worked well together to ensure the boater’s safety.

“I want to thank the Friendship fire boat for their work,” he said. “They were terrific and responded quickly.”