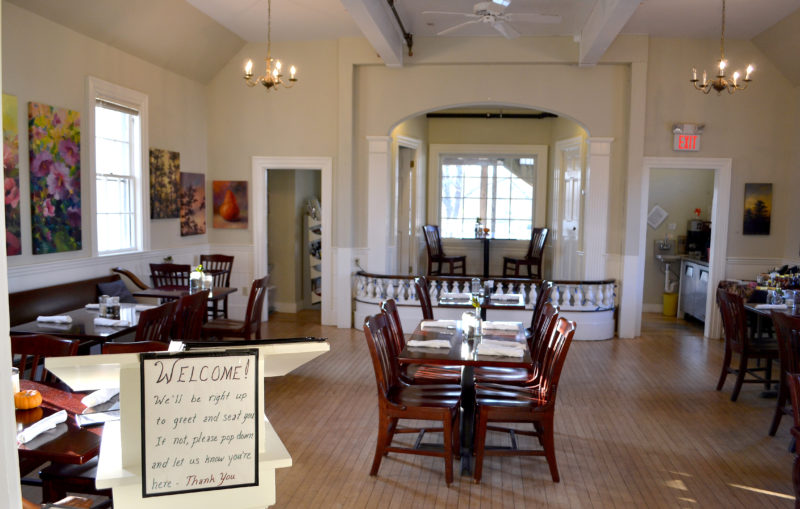 The main floor of Savory Maine Dining & Provisions. Owner Grace Goldberg plans to downsize the restaurant into the basement level of the building and convert the first floor into an apartment. (Maia Zewert photo)

When Savory Maine reopens after winter break in 2018, owner and cook Grace Goldberg will have shifted the entire restaurant from the main floor to the basement level.

“I have such mixed feelings about this, because (the main floor) is an incredible, beautiful space, but this is what needs to be done to keep the restaurant going,” Goldberg said

Goldberg opened Savory Maine Dining & Provisions in 2011 after renovating the historic building at 11 Water St. in Damariscotta. The origins of the structure date back to 1803, when the original, smaller building was used as a one-room school house in Sheepscot.

The Damariscotta branch of the Church of Christ, Scientist moved the building to Damariscotta in the early 1950s and built an addition. The church used the building as a meeting house until it closed in 2010, at which point the property was put on the market. Goldberg purchased it in 2011.

Goldberg completed “a lot of work” to the building before the restaurant opened, adding outdoor decks and two apartments, which have a steady rental history since.

Savory Maine opened in the basement level of the building in May 2011 before expanding to the first floor in June. Now, however, Goldberg is taking the restaurant back to its beginnings due to two prevailing factors.

“The past two summers I haven’t been able to have enough help, and this past year it’s been more and more difficult for me to keep coming up and down those stairs,” Goldberg said. “I knew I wanted to continue the restaurant, but it needed to be in a different way.”

“The reality is, though, the only time we’re truly full is for special events and parties,” Goldberg said. “This time of year, it’s slow, and during the summer, people want to eat outside.”

While Goldberg plans to pare down the menu, customer favorites like haddock chowder and quiche will remain, as will a meatloaf recipe from Goldberg’s late mother, Annette Goldberg.

“It’s the first thing I learned to cook,” Goldberg said. “I think about her anytime I make it or serve it.”

Goldberg plans to transform the main floor into an apartment with an open floor plan. After the restaurant closes for its winter break in mid-January, she will add a kitchen and renovate the bathroom.

The change in the space will likely impact some of the community events Savory Maine hosts, Goldberg said. She expressed uncertainty about whether events like the Damariscotta Open Mic and Damariscotta Death Cafe would be able to continue in the new, smaller space.

“I’m hoping we can accommodate them downstairs, but we’ll see how things go,” she said.

In addition, the restaurant is unlikely to continue hosting art shows. Over the years, approximately 50 artists have shown their work at Savory Maine, Goldberg said.

“It’s such a great space for showing art,” Goldberg said of the main floor. “I just don’t think we’ll be able to have the same thing downstairs.”

One thing that will not change with the move is Goldberg’s commitment to highlighting local “farmers, fishers, and foragers,” she said.

“I’m pretty deeply concerned about our planet as a whole,” Goldberg said. “We cannot keep importing food to this community from away – the economic, environmental, and (energy) costs are too high. It’s more important that we learn to feed ourselves locally.”

“One of the things I wanted to demonstrate to the community is that we can feed ourselves from our backyard, and that won’t change,” Goldberg said.

To stay up to date on changes at Savory Maine, find the restaurant on Facebook.