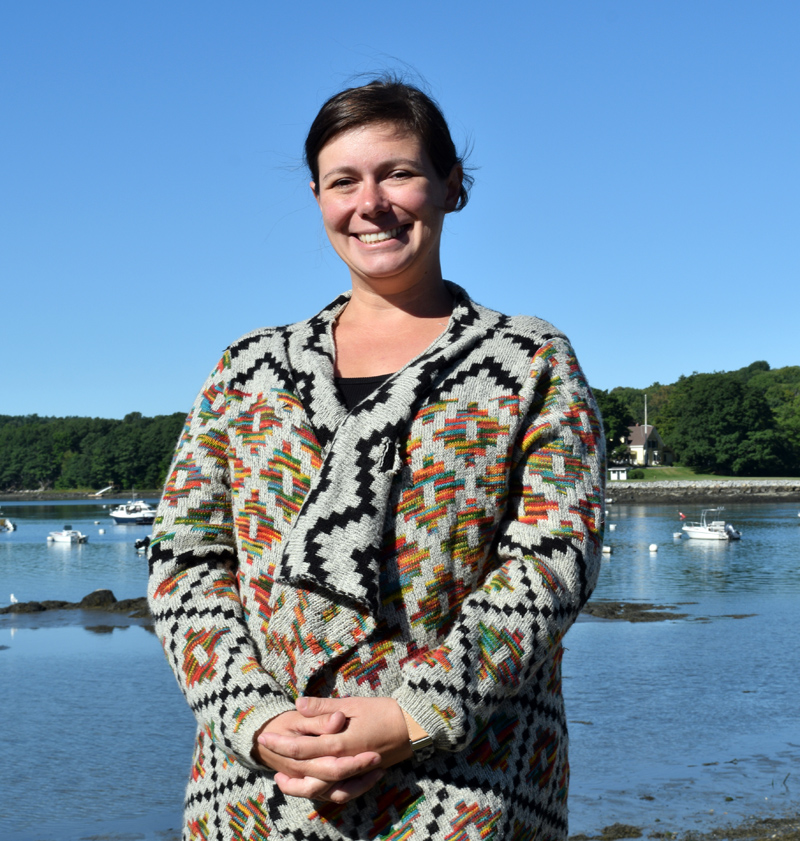 “I genuinely care,” Reny said during an interview on Friday, Sept. 2. “I care about our communities. I really do care about these kids standing a chance at it. We need to make sure that we preserve what we have and make progress.”

If elected, Reny says she would prioritize protecting the environment, creating affordable housing, and reducing healthcare and prescription costs.

Senate District 13 consists of all of Lincoln County except for Dresden, along with Washington and Windsor. Sen. Chloe Maxmin, D-Nobleboro, who currently represents the district, is not seeking reelection after one term in the Senate.

After a busy primary campaign and June election, Reny decided to take a leave of absence from her job as a school counselor at Woolwich Central School, where she has worked for the past nine years.

“I love my job, but you don’t want to only do it partway,” Reny said. “But also, you can’t campaign partway either.”

Reny grew up in Round Pond. She now lives in a house about “a mile up the road,” which she moved to after after working in Portland while earning a master’s degree in school counseling from the University of Southern Maine.

Reny strongly believes in public service and now wishes to serve her community on a broader level in the Maine Senate.

Growing up in a working class family, she said they had their share of troubles and she learned firsthand the power of a strong and supportive community.

“A little bit of help coming from someone can make all the difference in the world for the person receiving it,” Reny said.

Inspiration still lingers from her mother reading her Barbara Cooney’s “Miss Rumphius” when she was young. Reny recalled the message she took away from the book, saying “you need to leave the world a little bit more beautiful than you found it.”

Although Reny has not served in any governmental positions, she believes her work solving problems and working with others who harbor differing opinions or viewpoints has prepared her for the Legislature.

Reny has served on committees in Woolwich Central School and the RSU 1 district and was president of the Maine School Counselor Association. She believes progress can be made when people focus on what they have in common.

A central concern of Reny’s is the environment and climate change caused by greenhouse gas emissions. She agrees with the state’s plan to be carbon-neutral and transition to 100% renewable energy by 2045.

“There’s going to be some growing pains,” Reny said of the energy transition. “And I think it’s important to make sure that those growing pains aren’t only felt by working people and poor people in our most vulnerable populations.”

Reny also would like to see the Legislature pass the Pine Tree Amendment to the state constitution. The amendment was introduced by Maxmin last year and has been carried over to the current legislative session. It would need to be approved by two-thirds of the Legislature and by voters in a follow-up ballot measure to become enshrined in the Maine Constitution.

The amendment would add a section to the Bill of Rights of the Maine Constitution that will mandate that the state protect the people’s right to a “clean and healthy environment.”

The economy in Maine is intricately connected to the environment, Reny said, noting the prevalence of aquaculture, agriculture, fisheries, and tourism in the state.

“Without preserving a clean and healthy environment, we are putting our whole economy at risk,” she said.

Reny would also like to see MaineCare coverage expanded and some measures to rein in the cost of health care, particularly prescription drugs.

“You’re stuck either needing to be poor enough to qualify for MaineCare or Medicare, or you have to magically get rich really fast,” Reny said.

She acknowledged the need for more mental health and substance use disorder professionals in the area to help people in need of those services. People sit on waiting lists for mental health services for months at a time before they can find a professional in their area who has time to see them, Reny said.

“It’s bad for them, it’s bad for treatment, and it costs a ton of money,” Reny said. “We’re not helping anyone like that.”

These professionals also need an affordable place to live, Reny said, another key priority of hers. She said that affordable housing is supposed to cost 30% of one’s income.

“I am really tired of seeing working families, sometimes there’s three jobs between two parents, and they’re ending up either homeless or having to move way out of district, away from support systems,” Reny said.

She would like to see the Legislature incentivize the construction of affordable housing in some way.

“My guess is its going to take some sort of public-private partnership,” Reny said.

If elected, Reny hopes to shift state funds towards her priorities and the priorities of her constituents, which she is continually learning through knocking on doors in the district.

For more information about Reny’s campaign, follow Cameron Reny for State Senate on Facebook or go to cameronreny.mainecandidates.com.