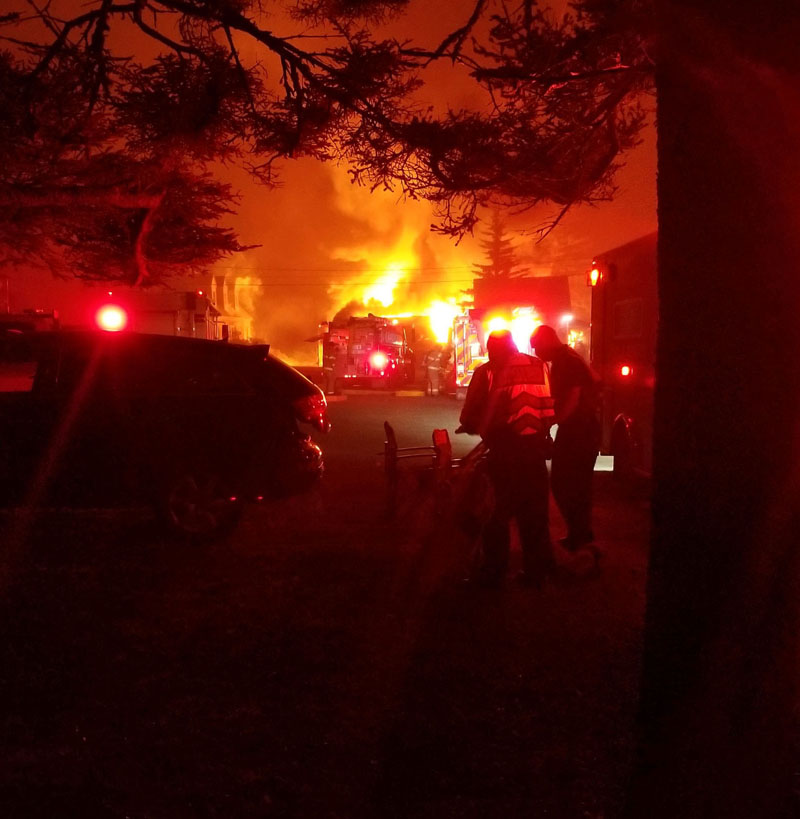 The Sea Gull Shop, the iconic gift shop and oceanside restaurant at Pemaquid Point, was destroyed in a fire early Wednesday, Sept. 9.

The Lincoln County Communications Center dispatched the Bristol Fire Department to the fire shortly after midnight.

Bristol Fire Chief Paul Leeman Jr. said the shop, which consists of a main building and two smaller outbuildings, was effectively destroyed. One of the buildings is still standing, but is badly damaged.

Firefighters worked to shield a neighboring house on the north from catching fire using a water curtain.

Leeman said some dormers on the house caught fire, but that fire was extinguished. He said he will eventually peel back the dormers to check for heat.

Leeman said firefighters were able to knock down and contain the fire in the Sea Gull Shop buildings in about 40 minutes, working carefully to allow a propane and oil tank to gradually release fuel.

Leeman and another firefighter saved two Native American statues that were outside of one of the burning buildings.

The Maine State Fire Marshal’s Office investigated and declared the fire “accidental” and the cause “undetermined,” according to Leeman.

Leeman said there were reports of fireworks in the area, but he is not sure if they were set off in the immediate vicinity of the shop.

Leeman is hoping to obtain surveillance footage from the business to help with the investigation.

“This is an historic fire,” Leeman said, referencing the shop’s 83-year run.

Tim and Betsey Norland own the business along with Brooke Cotter. The Norlands are natives of New Jersey, but started visiting the area in 1980. According to the shop’s website, Betsey first had lunch at the Sea Gull Shop with her family in 1959.

The couple agreed to buy the business from longtime owner Paula Houghton after learning that Cotter was willing to stay on as general manager and run the day-to-day operations of the store and restaurant.

The Sea Gull Shop first opened in 1937 as the Sea Gull Tea Room and has been serving visitors to Pemaquid Point Lighthouse Park ever since.

A longtime neighbor and patron of the Sea Gull Shop, Anthony Matrumalo, expressed regret at the destruction of the Pemaquid Point staple.

“Thousands of people from around the country and around the world probably remember this place,” Matrumalo said at the scene of the fire.

He said he had just had breakfast there with his family a few days prior to the fire.

The fire rekindled shortly after 2:15 a.m. Firefighters cleared the scene shortly before 10 a.m.